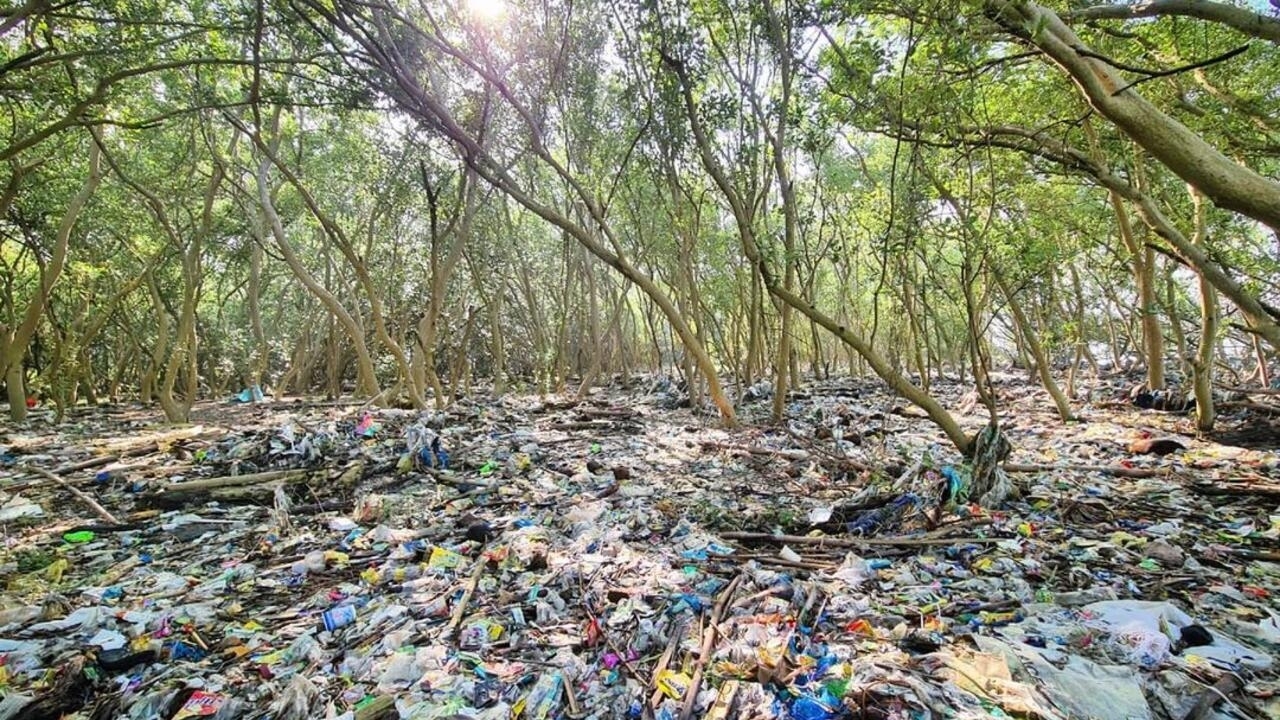 When Diovanie de Jesus, a biologist and bird lover, visited one of the last mangrove forests in the Bay of Manila, in the Philippines, he found it covered with plastic and other bits of trash, ranging from plastic bags to surgical masks to bottles. Images shared online, showing the mangrove forest covered with plastic, demonstrate just how bad the situation is in Manila Bay in the Philippines.

The mangrove forest is an ecosystem common to tropical and subtropical coastal zones. Mangroves have long, distinctive roots, adapted to swamps. The forests, which hug the coasts, play the important role of protecting inland areas from intense weather events, including high waves, strong currents and even typhoons. Mangroves are also important reproduction sites for many different animals.

Biologist Diovanie De Jesus was looking for birds when he went to the mangrove forest on Tanza Island, located near the town of Novatas, on September 25, 2021. Even though it was prime season for migratory birds, that’s not what De Jesus found there. He posted a few pictures of all the rubbish he found on social media.

I went to the island to take pictures of birds. But when I saw all the plastic, I was devastated.  The sight of birds trying to feed themselves amongst all the waste just broke my heart.

Almost the entire site was covered with rubbish. It’s an estuary and so rubbish gets carried in by the rivers and the swamp and then gets stuck in the mangrove roots.

Diovanie De Jesus is a scientist, who specialises in studying the ocean. He works for the Philippine branch of the NGO Oceana, which works to protect marine life.

Even though De Jesus knew about the environmental situation in the region, he was still surprised to see the state of the site. Especially because, just a week before his visit, a large group of volunteers had carried out a clean-up operation of Manila Bay to mark International Coastal Cleanup day, celebrated each year on September 18.

Lots of people who live in the city of Manila don’t know that there are mangrove forests so close to the city. I also took these photos to raise awareness, so they realise they are still there. They feel like Manila Bay is already dead.

The Philippines are one of the world’s largest ocean polluters. The situation is particularly bad in the bay around Manila, the capital of the archipelago, according to our Observer:

This plastic can suffocate the mangroves, preventing the roots from absorbing CO2 and thus killing them. The plastic also affects wildlife, who lose their habitat or could end up ingesting this plastic. Not to mention all of the risks plastic poses for human and environmental health.

The mangrove, which ingests a lot of CO2, acts like a lung for the planet. It’s progressive disappearance is thus a matter of global international importance. The situation is particularly concerning in the Philippines, which has lost 50 percent of its mangroves. It’s even worse along the extremely urban coastline of the city of Manila, where 99 percent of the mangroves have been destroyed.

The government has been pouring money into fixing up Manila Bay. The authorities, including President Rodrigo Duterte himself, have highlighted the rehabilitation of Dolomites Beach, located in the centre of Manila. The beach was cleaned up and covered with new sand as part of this project, which cost an estimated 389 million pesos (or €6.6 million). However, environmental activists have been critical of the project, claiming that the government is only focusing on a very visible, tiny part of the bay and thus just touching the tip of the iceberg:

We [environmental activists] are saddened by the way they have chosen to invest their resources.

They worked hard to make a tiny, but very visible part of Manila Bay very clean and very beautiful. But that beach only stretches for a kilometre along a coast that stretches along 200 kilometres. The rest of the coast looks more like what you see in my photos.

Local organisations are trying to work together to protect the mangrove forests, which are also being threatened by both urbanisation and agriculture. One group called Mangrove Matters, which is made up of young biology students, planted 1,500 trees in Silay City, located on Negros Island. The spokesperson for the group says the government should play an active role in “the conservation of the country’s remaining mangroves”, instead of handing out authorisations to coastal developers so they can destroy these precious forests.

The mangroves protect the coastline. If you stop protecting the mangroves, then the water will rise. When I was there, they had already removed some of them and you could see certain areas were flooded. Destroying mangroves is the opposite of sustainable development.

Denial of responsibility! TechiLive.in is an automatic aggregator around the global media. All the content are available free on Internet. We have just arranged it in one platform for educational purpose only. In each content, the hyperlink to the primary source is specified. All trademarks belong to their rightful owners, all materials to their authors. If you are the owner of the content and do not want us to publish your materials on our website, please contact us by email – [email protected]. The content will be deleted within 24 hours.
AsiaAsia / PacificBaychokesecologyenvironmentForestsHealth news
Share

Arjun Kapoor to star in thriller ‘The Lady Killer’

What to Cook Right Now