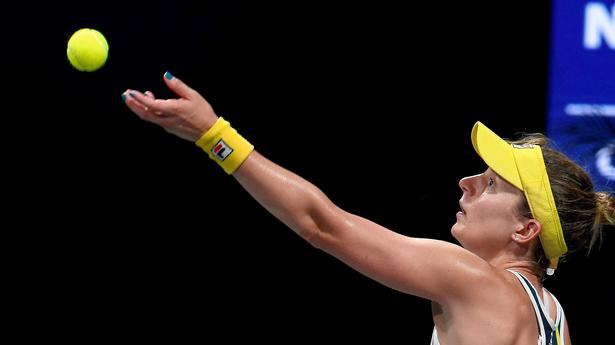 In a compelling, but not so thrilling, contest that ran for 2 hours and 46 minutes, Podoroska found herself down 1-5 in the deciding set tie-break before clawing her way back to win seven of the next eight points and defeat the tournament’s fourth seeded German.

‘One of the best’

During the on-court interview, former India player and Davis Cup captain Anand Amritraj described the contest as “one of the best he had ever watched.” Coming from him, it was high praise.

In the first set, though, there was no inkling of the result. Maria employed more than just her slice-heavy game; there were whipped forehands, slapped returns and drives from both wings as she took the set 6-3.

In the second, Podoroska, the 2020 French Open semifinalist, finally found the tennis to match Maria’s. She also had 10 years on her 35-year-old opponent, and it showed during long-drawn rallies. Podoroska moved Maria end-to-end and used the drop shot to great effect as she took the set 6-2.

In the third, Maria lifted her level a notch but Podoroska didn’t take much time to respond. Maria had four break-point opportunities – one each in games five and nine and two in game 11 – but the Argentine saved them all. She had one of her own in the sixth game, but Maria erased it with a fine service winner.

But once in the tie-break, both players seemed like nervous wrecks.

If Maria blew a 5-1 lead, Podoroska double-faulted on her first match point at 6-5. But the latter gathered herself just in time and showed enough staying power to finish on the right side of a lengthy rally to clinch the tie and book a meeting with Eugenie Bouchard.

Denial of responsibility! TechiLive.in is an automatic aggregator around the global media. All the content are available free on Internet. We have just arranged it in one platform for educational purpose only. In each content, the hyperlink to the primary source is specified. All trademarks belong to their rightful owners, all materials to their authors. If you are the owner of the content and do not want us to publish your materials on our website, please contact us by email – [email protected]. The content will be deleted within 24 hours.
Marianews updatepipsPodoroskasports newssports updatetechi liveThriller
Share

EXPLAINER: What to know about the UN General Assembly