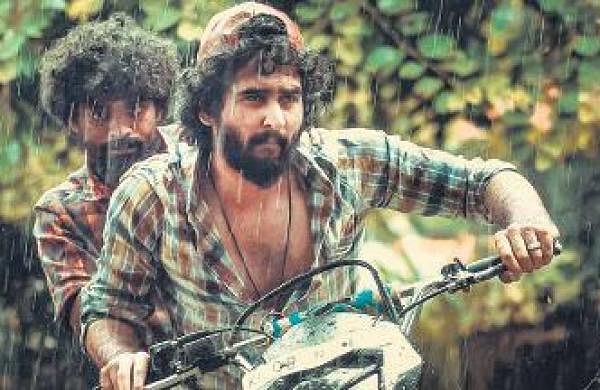 One is bound to find at least one person who saw Veyil and was impressed by the performances and the craft of a first-time filmmaker wondering whether the chaotic behind-the-scenes episodes had any impact on the abysmal box office performance of the film. “That’s not it,” maintains writer-director Sarath, adding, “Lack of promotion. Simple. On the first day of release, while on the ride from my home to the theatres, I had counted just three or four posters of Veyil in total. As I happen to be the maker, I look for them wherever I can find them. If the regular moviegoer had noticed the same, they, too, would be aware of the film. But many didn’t know about the film’s theatrical release.”

Sarath strongly feels that “post-pandemic, drama and performance-heavy films need to be promoted with the same level (or more) of seriousness as big-budget films.” “How else would audiences get an idea of what the film is about?” he asks. “These days, people have become very particular. Firstly, they want to know if it’s good; secondly, if it’s worth watching on the big screen—whether it’s a clap-worthy, community experience. And when you have a film directed by a newcomer and featuring an up and coming star, one should be obliged to let people know the film’s worth regardless of who is at the helm. And it’s so strange to see people asking, in the comments of Veyil’s promo materials before the OTT release (on Prime Video), when the film is releasing.”

Though the theatrical response to Veyil distressed Sarath, he found the post-OTT reception heartwarming. “We got favourable reviews from other states too, not just Kerala. I got people sending me messages on Instagram. 75-80 per cent of the viewers liked everything about it; 15-20 per cent felt the lag in some places; under 5 per cent didn’t like it at all. But that’s expected of any film in any genre. Some don’t prefer the loudness of films like KGF.  Naturally, a film like Veyil would be sought out only by those who prefer films in its genre. But what’s upsetting is that Veyil didn’t even reach our target audience the way we wanted it to. Again, no basic promotions, no posters…”

Sarath invites the small percentage that found the film dragging in a few places to consider the following reasoning. “I wrote the script in such a way that there was no space for any superfluous scenes,” he says. Even Veyil editor Praveen Prabhakar (Koode, Bangalore Days) agrees with Sarath that “Veyil being an emotion-driven film, if we had excised just one scene, even the majority that appreciated it might not have liked the revised form.”

Sarath also brings up the interesting screenplay structure of Veyil. “It was conceived in a way that could’ve enabled the creation of two separate films. The first half has an opening, middle and end. The same can be said of the second half. But we shrank it to a two-and-a-half-hour feature. It’s a film that requires much focus. Getting distracted by the phone constantly won’t help. Every moment and dialogue is important. And since it’s a drama, it’s hard to build a thrilling element at the beginning of the film. I tried doing that to an extent in a couple of scenes to engage viewers’ attention.”

Sarath also recalls the surprise he felt when viewers of the 50-60 age group responded positively to Veyil. “I was sceptical about them warming up to the film at first. I’m guessing they could appreciate it more because they grew up with better attention spans and viewing habits. They are not easily distracted as we are,” he observes.

Veyil was first in the hands of another producer before Joby George Thadathil of Goodwill Entertainments bought it. “The latter came on board the film much later—and he didn’t even hear the story!” Sarath recounts. “When the first producer couldn’t go forward with the film, I used my own money to shoot a festival sequence which I had planned. When Joby took over, I expected to be compensated for that sequence and my work in the film, but I got neither. The agreement was to finish the film within a certain budget and schedule. We shot it with one camera, completely handheld, with a few tripod shots. The credit for that goes to my director of photography, Shaz Mohammed. I could only pull off a little of what I wanted. There were limitations when it came to the technical department. The only aspect I had complete control over was storytelling. But no matter what the issues were, at least I’m glad the film is out there.”

So what has Sarath learned from Veyil—and how has it changed him? “It was like a film school textbook,” he says. “I have gone through all kinds of situations with this film. Shooting with limited time, budget, crew, and technical support is one. Moreover, we had to deal with the effects of the pandemic. Things got very chaotic after that. We shot the second half first and then the first half during the pandemic.

We couldn’t get some crucial shots because the police shooed us away. But through all these setbacks, I had no confusion about the kind of film I wanted to make. Yes, the experience changed me a lot. It gave me the confidence to shoot in any situation. I can say that I’m well-prepared for my next movie. Now I know that I need to be very cautious about what I’m going to do next. The target audience, platform, and the people I’m working with… all require thoughtful consideration. After all, this is an art form, and I need people who should look at a film as their own baby instead of seeing it completely as a money-making effort.”Sarath hopes to deliver a wholesome theatrical experience with his next project.  “I grew up enjoying character-driven, dialogue-oriented mass appeal films, so I expect to make something along those lines.”

Denial of responsibility! TechiLive.in is an automatic aggregator around the global media. All the content are available free on Internet. We have just arranged it in one platform for educational purpose only. In each content, the hyperlink to the primary source is specified. All trademarks belong to their rightful owners, all materials to their authors. If you are the owner of the content and do not want us to publish your materials on our website, please contact us by email – [email protected]. The content will be deleted within 24 hours.
'Veyil'Directordramaheavyentertainment newsEntertainment updatefilmsrequireheaviernews update
Share

KEAM 2022: Application deadline extended till May 10, apply at cee.kerala.gov.in