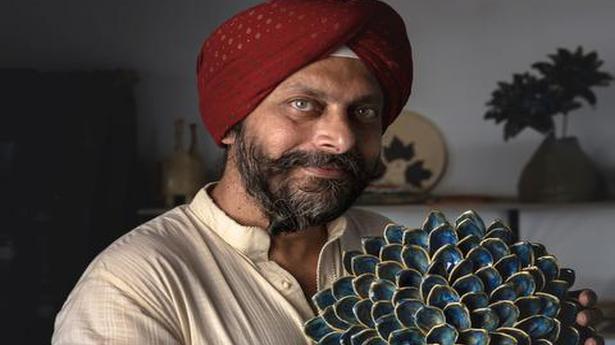 The interiors of Manpreeth Singh Nishter’s 1,000-square foot pottery studio belie the sweltering mid-March Hyderabad heat. Located inside a new gated community in Kokapet, the studio is built so that air circulates all through the premises, with tall roofs and strategically-placed vents and louvres.

Sustainable architecture principles went into designing his new home and studio, which he moved into two years ago. Terracotta flooring, fly ash bricks and judiciously placed jaalis help ward off the heat.

On display at the studio are a few of his creations. When he began learning pottery 13 years ago, he was not interested in making cups, mugs, plates and bowls. He does a few of them occasionally, but makes them distinct in texture or shape. Consider a dinner plate with an in-built holder for a wine glass, for instance.

“My creations stand out in a crowd, just like my turban,” he says with a laugh.

Nishter’s ceramics are inspired by Nature. A multi-layered blue floral piece, which also resembles a succulent, can be used as table or wall décor. It took him four months to arrive at the desired shape and he glazed it in peacock hues. He remembers being artistically inclined while growing up but did an MBA and took up a corporate career. He pursued a marketing job for 15 years and creative pursuits were relegated to weekends. He met artist Karan Randhawa and through him, fine-tuned his skills in painting, collage-making and photography.

The intent to do things his way was prevalent since childhood: “I never liked drawing classes where teachers would draw one half of an image and expect me to complete the other half.”

Around 13 years ago, when his interest in pottery grew, he looked around Hyderabad for guidance. “Back then, there was only one known ceramic potter here and she preferred to work alone. So I had to look for other options,” he says. 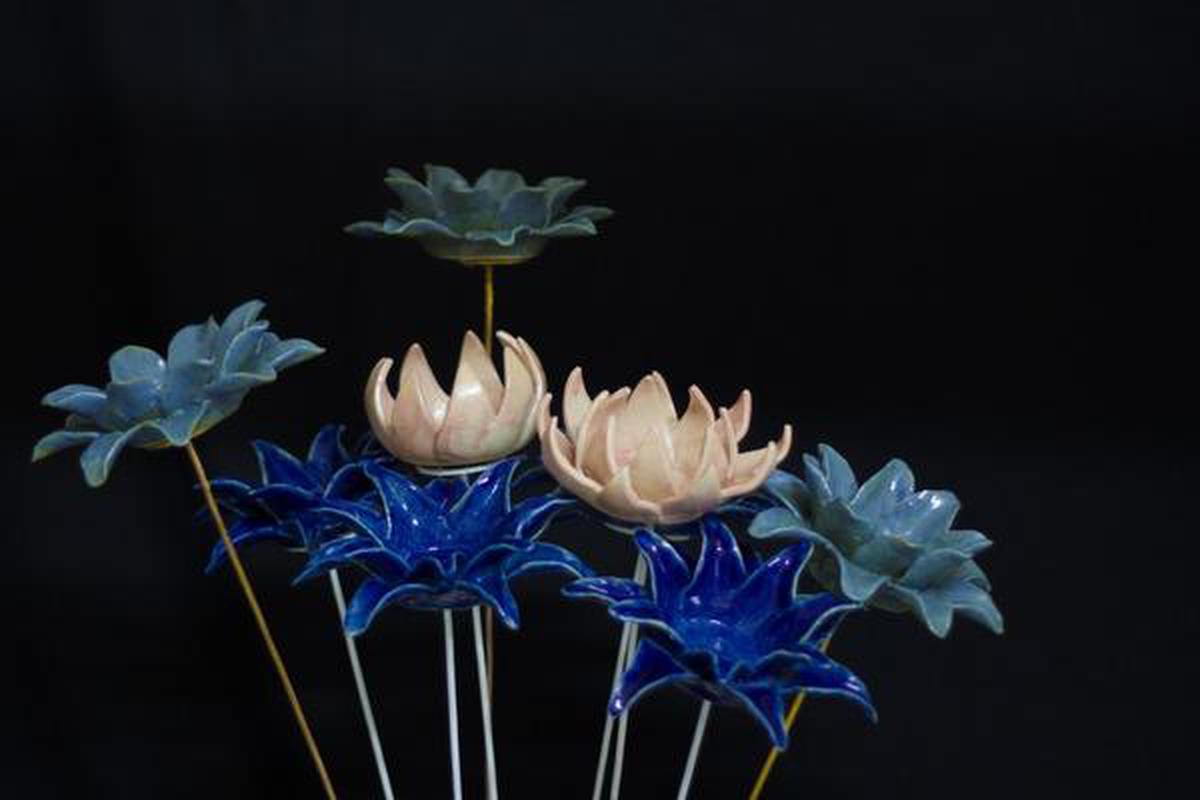 Nishter went to the Delhi Blue Pottery Trust, a community studio, where he learnt the art of hand-making objects during a summer camp: “None of my creations are designed on a potter’s wheel. Everything is handmade. I learnt this at the studio, where the tutor first taught me to make a bowl. He then asked me to make six of them. I designed six differently-shaped bowls. There was no looking back.”

For 10 years, Nishter travelled to Delhi once or twice a year to work at the studio. He gradually learnt the different techniques of firing and figured out what suits his method of work.

Nishter’s studio has a custom-made Cone Art square-shaped electric kiln, rather than an octagonal one, which he says can hold more objects for firing: “This kiln uses 30% less power compared to a conventional kiln; it helps to reduce the carbon footprint in the long run.”

Explaining why an electric kiln is more sustainable than a wood-fired one, he says, “I don’t like the idea of cutting trees. It is different if a potter in Auroville uses wood-fired kilns because they grow trees specifically for this purpose. A gas or electric kiln would be better alternatives for me. Gas, however, requires you to be on your toes while the firing process is on, which takes several hours, and the results are unpredictable and so I chose electric.”

Shapes of leaves, butterflies, flowers, turtles, birds and fish are predominant in his work: “I didn’t plan it this way. If I take a piece of paper to draw something, I tend to draw Nature-inspired shapes,” he says. Nishter makes the glazes in varied hues from flaming oranges to aqua greens and blues. 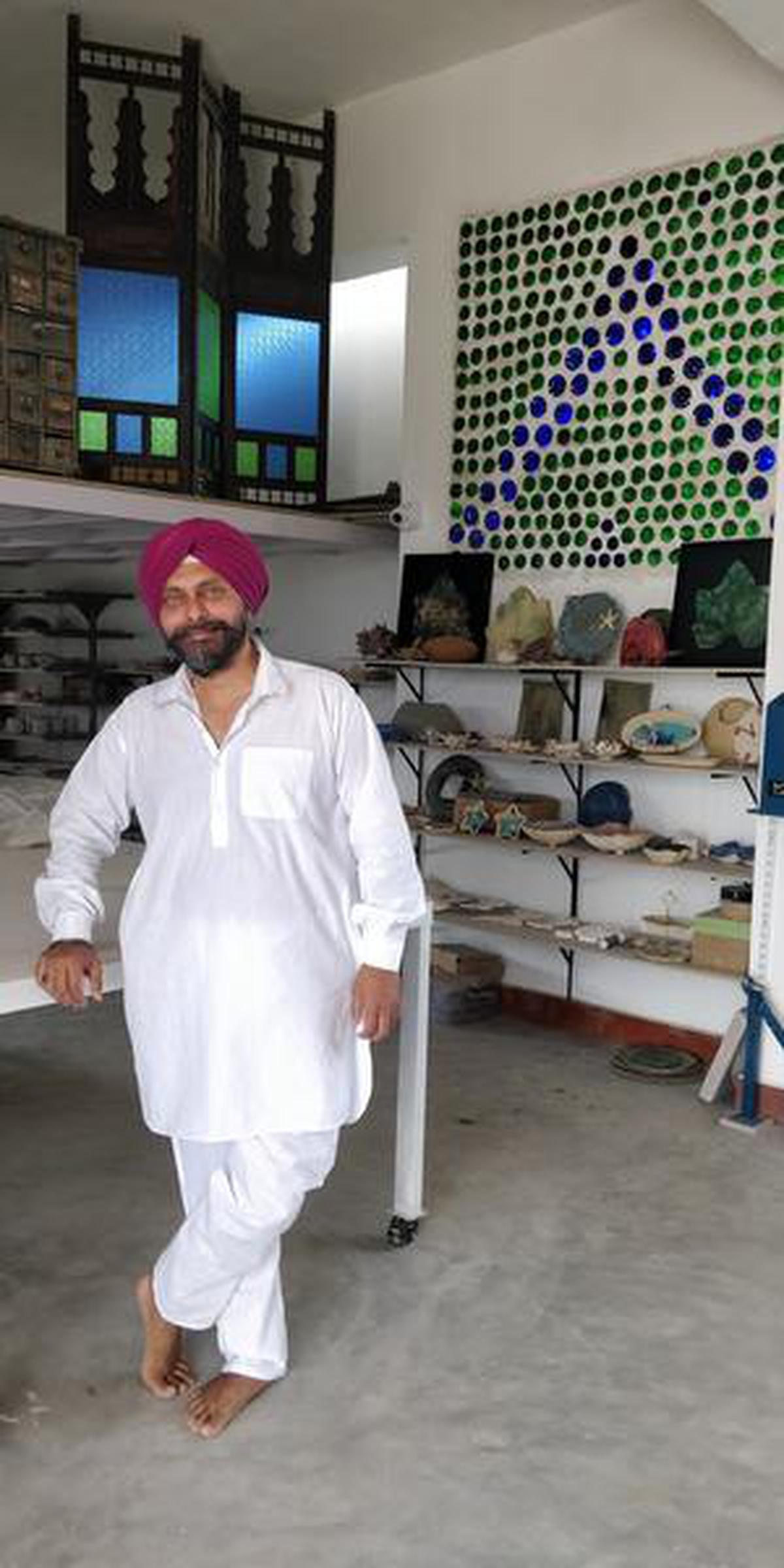 Manpreet Singh Nishter at his studio

The studio is designed using re-purposed industrial waste. The long work tables and slabs on which he moulds the clay, the equipment used for mixing, preparing and cutting the clay are all upcycled from waste: “Since I don’t like cutting trees, I don’t use plywood. We have used just four pieces of plywood in the entire premises.”

Doors were sourced from erstwhile havelis that were brought down to make way for new constructions. Discarded cabinets and tables sourced from different places were mended to make them functional again.

The zero-waste studio has a recycling bin, no dustbins. He stopped using plastic 28 years ago, when he joined Blue Cross of Hyderabad as a volunteer at the age of 17. Around the same time, he came to know about a veterinarian in Puttaparthi operating on cows and finding plastic bags in their stomachs: “I stopped using plastic, and turned vegan.”

Nishter’s day begins at 4am and he finds working with clay therapeutic: “It’s de-stressing since I am working with earth, water, air and fire. My dosage for blood pressure halved after I quit my marketing job two years ago. I didn’t set out to become a professional ceramic potter; it started off as a hobby and my wife encouraged me to pursue it. I worked in the corporate sector to make money. Now I do what makes me happy, and incidentally it fetches me an income as well,” he says.

Denial of responsibility! TechiLive.in is an automatic aggregator around the global media. All the content are available free on Internet. We have just arranged it in one platform for educational purpose only. In each content, the hyperlink to the primary source is specified. All trademarks belong to their rightful owners, all materials to their authors. If you are the owner of the content and do not want us to publish your materials on our website, please contact us by email – [email protected]. The content will be deleted within 24 hours.
Ceramicseco-friendlyentertainment newsEntertainment updatehandhandmadeinspiredManpreeth Singh Nishter
0
Share

CGBSE Class 12 boards: Chhattisgarh to hold from June 1 in ‘exam from home’ way

‘Cool’ PPE kit for Covid warriors, thanks to student from Mumbai