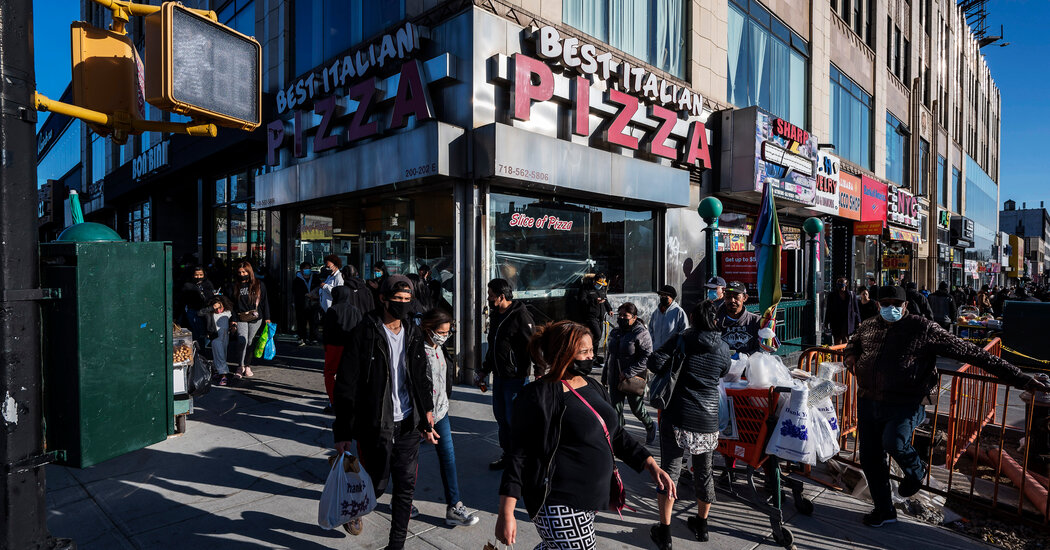 Prices jumped 3.6 percent in April, the fastest pace in 13 years.

Prices are climbing at the fastest pace since 2008, a key index released on Friday showed, an increase that is sure to keep inflation central to economic and political debates.

The Bureau of Economic Analysis’ personal consumption expenditure inflation measure climbed 3.6 percent in April from the prior year — the strongest reading in 13 years and more than the 3.5 percent gain that economists in a Bloomberg survey had expected.

The core price index, which strips out volatile food and fuel prices, rose 3.1 percent in the year through April — the fastest pace since 1992. Prices rose 0.7 percent compared with the prior month, the biggest increase in two decades.

The pickup in inflation is coming as rebounding demand and supply shortages push costs higher, along with data quirks that are increasing the annual number: That data point is jumping higher partly as the price index laps very low readings from last year’s spring shutdown. The inflation gauge is closely watched because it is the Federal Reserve’s favorite, and officials are carefully monitoring the pickup in prices as the economy reopens.

The Fed aims for 2 percent annual inflation, on average over time. Price gains are well above that now, but central bankers and economists expect that pickup will probably fade with time as producers catch up with consumer demand and the boost from government stimulus disappears.

Having a core gauge of “inflation at a 29-year high won’t faze the Fed, yet,” Ian Shepherdson, chief economist at Pantheon Macroeconomics, wrote in a note following the release. “We expect most Fed officials — and especially the governors — to stick to the line that inflation pressures are expected to be ‘transitory’ or ‘transient,’ due to ‘bottlenecks.’”

The report showed that personal income declined sharply in April as a jump caused by stimulus payments in March faded, something that was broadly expected. Income fell by 13.1 percent, actually a smaller decrease than the 14.2 percent drop economists had anticipated.

Personal spending rose 0.5 percent, a slow but steady pace, but that improvement eroded when counting for price increases. In a surprise to economists, spending actually declined slightly when adjusted for inflation, falling by 0.1 percent — missing the 0.2 percent gain they had penciled in.

“The combination of falling real consumption and soaring prices last month gives off a faint whiff of stagflation,” Paul Ashworth, chief U.S. economist at Capital Economics, wrote in a note following the release. There was some pickup in services spending, but he noted that the pace was “a bit of a disappointment given the removal of most Covid-related restrictions.”

But Gennadiy Goldberg, a rates strategist at T.D. Securities, said that because the inflation pickup is likely to fade with time, it makes more sense to focus on the acceleration in the headline index — and the overall takeaway there is that people are reopening their pocketbooks.

“That data is still going through stimulus, post-stimulus check volatility,” Mr. Goldberg said. “Are consumers spending? I think the data is telling us that yes, they are.”

The figures are the latest to underline that the economy is in for a bumpy ride as it reopens from months of state and local lockdowns meant to contain the coronavirus pandemic. The Fed, which is tasked with maintaining stable prices and is supposed to foster full employment, has signaled that it is willing to look through the current run-up in inflation as the economy heals and moves through such an unusual period.

But the central bank has also signaled that if price gains prove persistent or get out of control, it would act. That could mean a quicker pullback from mass bond-buying or interest rate increases, policies the central bank is now using to support the economy by keeping a wide range of borrowing costs low. Both bond purchases and low rates support asset prices, so markets have been on edge about the possibility of faster inflation that prompts the Fed to reduce its economic support.

Revised data released Friday showed that the University of Michigan’s consumer inflation expectations indexes were elevated in May, with Americans anticipating higher prices both in the near term and over the next five years. The index for inflation expectations over that longer time horizon came in at 3 percent, the highest since 2013. Top Fed officials have a history of watching the Michigan data series.

Politicians have been talking about price changes daily since an earlier and related inflation release — the Consumer Price Index report — showed that inflation picked up more than expected in April.

Republicans paint the inflation as a sign that big government spending is coming at a cost, while Democrats say it is a temporary phenomenon, driven by data quirks and the fact that demand is bouncing back and supply must rise to meet it. They argue short-lived bigger price gains are no reason to change course.

The question now for both the White House and the Fed is both how quickly supply can react, and how long the current trend will last.

“It’s going to look worse than it is for a while,” Mr. Goldberg said. “The Fed has to stay strong in the face of higher inflation.”

Denial of responsibility! TechiLive.in is an automatic aggregator around the global media. All the content are available free on Internet. We have just arranged it in one platform for educational purpose only. In each content, the hyperlink to the primary source is specified. All trademarks belong to their rightful owners, all materials to their authors. If you are the owner of the content and do not want us to publish your materials on our website, please contact us by email – [email protected]. The content will be deleted within 24 hours.
Loading...
AprilEducation newsEducation updatefastestJumpednews updatePacePercent
0
Share

The four-hour challenge in Carnatic music