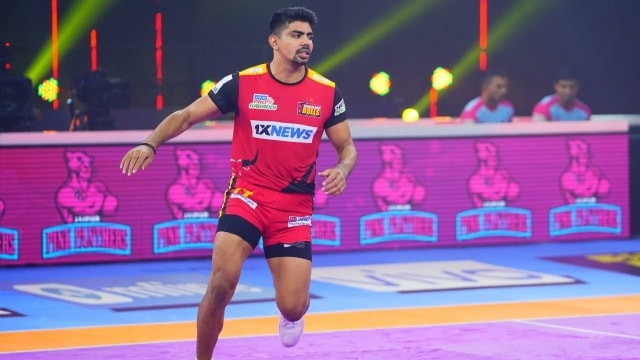 Sehrawat became the first player in the history of the PKL to breach the Rs 2 crore-mark as he was bought by Tamil Thalaivas. Image: Shyam Vasudevan/Twitter

Pro Kabaddi League (PKL) Season 9 Player Auctions, which is being held in Mumbai, witnessed plenty of fierce bidding and some surprises. Notably, the non-retained players in Domestic, Overseas, and New Young Players (NYPs) were divided into four categories: Category A, B, C and D in this Player Auction. The players were further sub-divided as ‘All-Rounders’, ‘Defenders’ and ‘Raiders’ within each category.

Here we take a look at the top five expensive buys of the PKL 9 Players Auctions:

Pawan Kumar Sehrawat (India): Sehrawat became the first player in the history of the PKL to breach the Rs 2 crore-mark as he was bought by Tamil Thalaivas for a whopping sum of Rs 2.26 crore. Sehrawat, also known as the ‘HI-Flyer’, has been the number 1 raider in the last three seasons. The star athlete was the most valuable player in the season six and was rated as the best raider in the Pro Kabbadi League season eight.

Vikash Khandola (India): Vikash Kandola – who was part of the Haryana Steelers side until last season, became the second most expensive buy ever in the PKL Auction history as the 24-year old raider was bought for Rs 1.70 crore by Bengaluru Bulls. Vikash’s main weapon is his Running Hand Touch.

Fazel Atrachali (Iran): The Iranian kabaddi legend Fazel Atrachali broke the record for the most expensive defender and overseas player ever after being acquired by Puneri Paltan for INR 1.38Cr. Atrachali held both the records previously when he was picked by U Mumba for INR 1 crore in the 2018 PKL Player Auctions. Sultan’ Fazel is known as a Tiger in the PKL. With his deadly and trickest moves he is surely one of the strongest defenders to look out for this season.

Guman Singh (India): Guman emerged as the most expensive Category B player at the PKL Player Auctions, being bought for a whopping INR 1.21 crore by U Mumba. The raider, who was part of Patna Pirates last season, was one of the standouts of Season 8, where he mustered 95 points in 19 matches.

Pardeep Narwal (India): Veteran raider Nrawal found a bid of Rs 90 lakh from the Gujarat Giants, but returned to the UP Yoddha side after the franchisee used the Final Bid Match (FBM) Card to retain him. Left raider Narwal has all the tricks in the book and specializes in the ‘Dubki’, a challenging escape skill for a raider that involves him crouching below a chain of defenders and spring from the mat in a jiffy.

Denial of responsibility! TechiLive.in is an automatic aggregator around the global media. All the content are available free on Internet. We have just arranged it in one platform for educational purpose only. In each content, the hyperlink to the primary source is specified. All trademarks belong to their rightful owners, all materials to their authors. If you are the owner of the content and do not want us to publish your materials on our website, please contact us by email – [email protected]. The content will be deleted within 24 hours.
9SportsauctionbuysexpensiveFirstpostKabaddiLeagueNews
Share

Hearing Aids Will Soon Be Cheaper and Over-the-Counter

Check Out These Cheap New Steam Game Bundles At Fanatical

Plus Therapeutics Awarded $17.6 Million from State of Texas