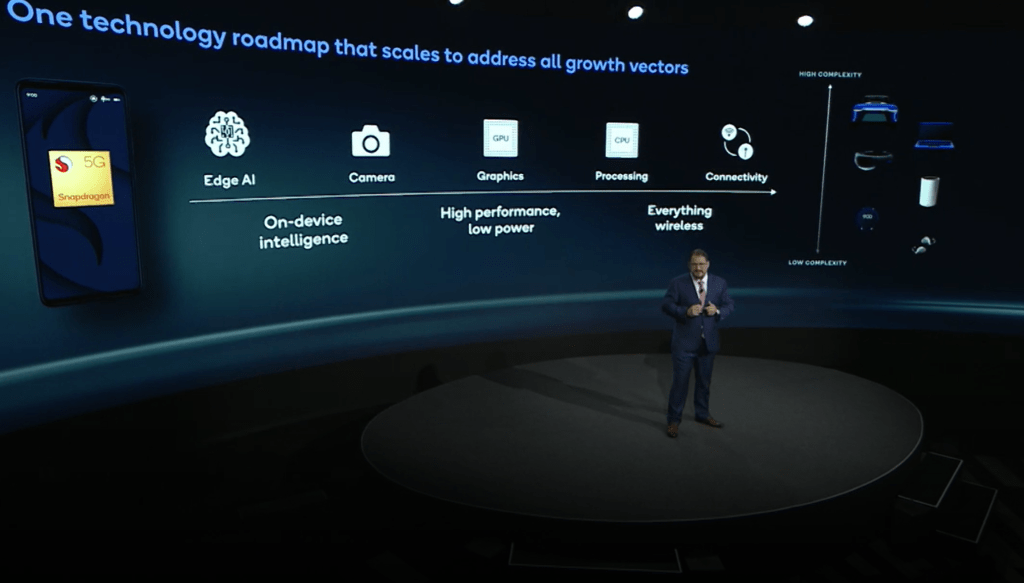 Qualcomm prophesizes 2023 as the rebirth of its Snapdragon chips

Qualcomm processors for PCs enhanced by the company’s Nuvia design team will sample in 2022 for devices shipping in 2023, Qualcomm executives said Tuesday. The company also boldly pledged to offer Adreno graphics that could compete with desktop PCs.

At the company’s 2021 investor day in New York, Dr. James Thompson, chief technology officer at Qualcomm, offered an overview of the company’s technology roadmap in several areas. A key focus, naturally, will be how and when Qualcomm’s Snapdragon processors will integrate the Nuvia design team, an Arm CPU developer that Qualcomm acquired in January.

Processor development takes time, however, and that integration won’t happen immediately. “They’re pretty far along at this point,” Thompson said, presumably talking about the first Snapdragon processors featuring Nuvia technology. “We’ll be sampling a product nine months from now, or something like that.”

Thompson said that Qualcomm’s goal was to have the “highest-performing, lowest-power CPU in the industry” and that the new chips would “set the performance benchmark for Windows PCs.”

Low power, of course, is a goal that Qualcomm has always easily achieved. Qualcomm’s Arm-powered CPUs sip power, using a “big-little” mix of performance and efficiency cores that are allocated for specific tasks and whose overarching design has been mimicked in Intel’s 12th-gen “Alder Lake” Core chips.

Qualcomm’s problem has been that its “performance” cores have failed to keep up with X86 designs from AMD and Intel, putting them in a niche market where performance doesn’t matter as much as battery life. Our tests of the Snapdragon 8cx Gen 2 5G from earlier showed that it (in the HP Elite Folio) offered performance about on par with the Surface Pro 3 and its 4th-gen Core chip. Unfortunately, the PC industry’s answer has simply been to add more battery cells to their designs, making those laptops a bit thicker and heavier but with more performance, too. Qualcomm Snapdragon chips also haven’t been able to keep up with the Apple M1, a chip that benefits from Apple’s more open architectural license.

“If you think about the overall technology roadmap, that was the overall weakness I felt we had for quite a while,” Thompson said of the Snapdragon roadmap before acquiring Nuvia.

Thompson also claimed that the company’s graphics technology was on pace to improve, too. In terms of the Adreno integrated graphics core onboard the Snapdragon chips, Qualcomm performs somewhat better against the competition than its CPUs at present—somewhere between an 8th-gen and a 10th-gen Intel Core processor, when measured by the 3DMark “Night Raid” benchmark.

Thompson, though, said that Qualcomm could do better. “I just want to make it clear that our graphics will scale up to desktop-style gaming capabilities,” he told investors. He didn’t elaborate further.

Thompson had some advice for reviewers, however, noting that the company’s own tests had shown that competing graphics solutions offered higher benchmark scores when tested just once. When tested over a prolonged period of time via looped benchmarks, however, he said that the Snapdragon mobile processors generated better overall sustained performance.

Thompson also said that the company will continue to improve its AI capabilities over time. Today, AI has several applications: It can be a way in which Google Assistant parses your spoken commands and queries, or it can be a way in which a photo is computationally enhanced to bring out detail. The latter is known as semantic segmentation, and is responsible for the visual improvements that make skies bluer, sharpens the edges of buildings, and so on. Thompson also showed an 8K30 video, which he said Snapdragon processors support, and promised HDR enhancement would arrive soon.

Denial of responsibility! TechiLive.in is an automatic aggregator around the global media. All the content are available free on Internet. We have just arranged it in one platform for educational purpose only. In each content, the hyperlink to the primary source is specified. All trademarks belong to their rightful owners, all materials to their authors. If you are the owner of the content and do not want us to publish your materials on our website, please contact us by email – [email protected]. The content will be deleted within 24 hours.
chipsgadget updateprophesizesQualcommrebirthSnapdragontech newstech update
Share

Kevin Durant Can Score From Anywhere. Defenses Don’t Know What to Do.