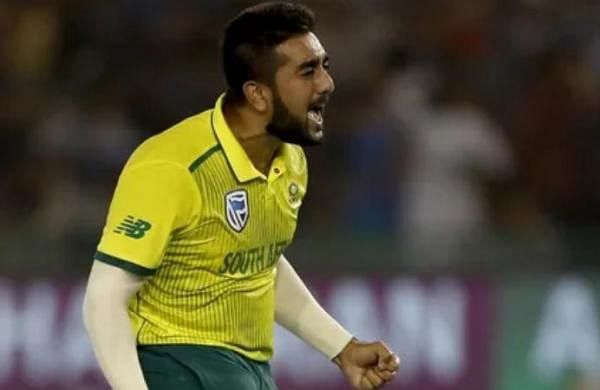 NEW DELHI: Set to play for the Rajasthan Royals in the second leg of the IPL, South African spinner Tabraiz Shamsi said he is looking to gather some “inside information” about the UAE pitches before he returns to the country for the upcoming T20 World Cup.

Shamsi, the world no.1 ranked T20I bowler in ICC rankings, will be joining the Royals squad as a replacement for Australian pacer Andrew Tye for the remainder of IPL scheduled to be held in the UAE from September 19.

“I’m not going to sit here and pretend that I’m not excited about (the IPL). I am very excited. Especially because I’ve never played in Dubai and Abu Dhabi,” Shamsi was quoted as saying by ‘ESPNcricinfo’.

“The IPL is a different thing. I have played in the past but I was a lot younger and I didn’t get a lot of game time regularly. When you get regular game time, you can showcase what you can do. You can improve,” he added.

Shamsi had earlier played four IPL matches in which he picked up three wickets for the Royal Challengers Bangalore, who had recruited him as a replacement player during the 2016 season.

“…I’m really happy I got picked up in the IPL because I’ve never been there and played there. It will be nice if I can play on those pitches and get some inside information and gain some experience; just to be able to pick up some knowledge and information that might help us in the World Cup,” said Shamsi, who has since picked up 45 wickets in 39 T20Is, along with 32 wickets in 27 ODIs for South Africa.

The 31-year-old left-arm spinner feels South Africa will do well at the T20 World Cup, considering their strong bowling attack. “…I believe we have one of the best bowling attacks in the world. All we need is a bit of game time. I’m not saying that because we’ve won a couple of series back-to-back. The talent in the squad is there,” he said.

“We might be inexperienced at the international level but it doesn’t mean that we don’t have the skill. We showcased that against a very strong West Indies team, and against Ireland. Nobody here wants to lose and I know the people back home don’t want to see us losing. So we’re pushing it. We just need a bit more time together. The more we play together the better we’re going to get,” he added.

Loading...
Denial of responsibility! TechiLive.in is an automatic aggregator around the global media. All the content are available free on Internet. We have just arranged it in one platform for educational purpose only. In each content, the hyperlink to the primary source is specified. All trademarks belong to their rightful owners, all materials to their authors. If you are the owner of the content and do not want us to publish your materials on our website, please contact us by email – [email protected]. The content will be deleted within 24 hours.
Informationiplipl 2021news updatepickpitchesRajasthanRajasthan Royals
Share

Shaili Singh is more or less like me, will be happy to see her break my record: Anju Bobby George