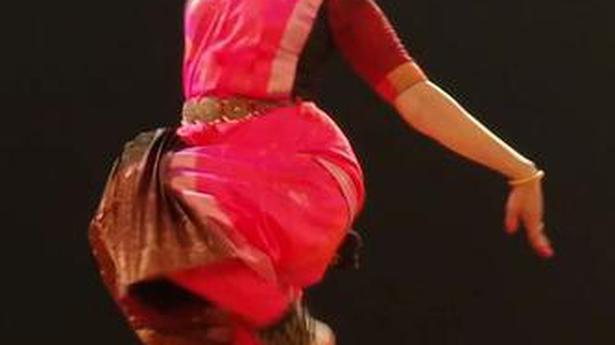 Rama Vaidyanathan’s Bharatanatyam recital was a studied effort, if a little subdued. The senior dancer chose a few compositions outside the Bharatanatyam repertoire, and presented them in her distinct style, while retaining their integrity.

The music, recorded with senior musicians such as Sudha Raghuraman (vocal), G. Raghuraman (flute), Dr. S. Vasudevan (nattuvangam), and Manohar Balatchandirane (mridangam), was of a high order, notwithstanding the patchy recording.

The opening Shabdam, ‘Thillai ambalam’, ragamalika, misra chapu, by Thanjavur Arunachalam Pillai, was stretched to afford further scope to the dancer. Simple nritta patterns set to music alternated with passages of the nayika yearning to be with Nataraja, the dancing god of Chidambaram.

Rama took artistic liberties to spice up some pieces. Syama Sastri’s ‘Samini rammannave’ (Anandabhairavi), the only piece in which the composer deals with madhura bhakti, was the centrepiece. In this composition, the pallavi loosely translates as, ‘Please ask my Swami to come here’, and Rama‘s creativity in presenting the lines as, ‘Please bring him to me; I cannot say his name, I will give you clues…’ enhanced its appeal.

Some clever delineations marked the segment where the nayika asks her lotus-eyed friend why she is being as indecisive as a pendulum instead of carrying her message to Varadaraja. She repeated the sequence at the end of the varnam, threading the composition together. Another arresting part was the Garuda Sevai in the anupallavi.

In ‘Sati ninnu gelichenu’ (tuned by Sathiraju Venumadhav in Karnaranjani, khanda chapu), Rama added a plausible context to Annamacharya’s words, ‘The lady wins over you… Find it in you to praise her…’ The imaginative dancer interpreted it as the poet counselling Venkateshwara after his tiff with Lakshmi.

Rama had her fill of rhythmic challenges in the khanda jathi-ata tala varnam that had a delayed eduppu. The jathis (Subodh Sridhar) were just right, with a ‘thakadimi thakita’ thread running through them, especially in the trikala jathi. Rama executed them with perfect timing, footwork and agility.

Denial of responsibility! TechiLive.in is an automatic aggregator around the global media. All the content are available free on Internet. We have just arranged it in one platform for educational purpose only. In each content, the hyperlink to the primary source is specified. All trademarks belong to their rightful owners, all materials to their authors. If you are the owner of the content and do not want us to publish your materials on our website, please contact us by email – [email protected]. The content will be deleted within 24 hours.
Agile and perfect footworkentertainment newsEntertainment updatenews updatePresentsRamaRama VaidyanathanRepertoire
Share