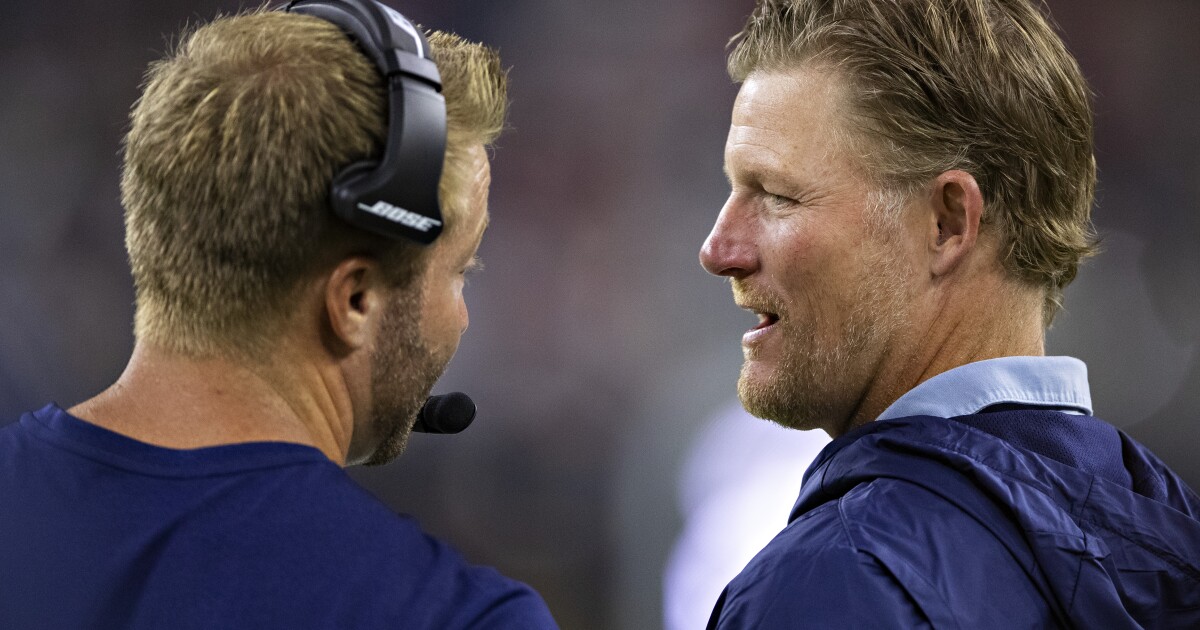 Rams feeling super about revamped roster, but real test is a field of dreams for now

For eight months, Rams general manager Les Snead added to, subtracted from and reconfigured the team’s roster to give coach Sean McVay the pieces necessary for a run to Super Bowl LVI at SoFi Stadium.

The $5-billion stadium was built by Rams owner Stan Kroenke.

But Snead said Wednesday there was not extra pressure to make sure the Rams are playing there Feb. 13.

Last season, the Tampa Bay Buccaneers became the first team to win a Super Bowl in their home stadium.

“I don’t think it adds any element of more pressure than a normal, let’s call it, a big game in December,” Snead said. “Be cool though. We could have the first home game Super Bowl with like a lot of fans, not just an abbreviated amount of fans.”

A day after Snead and McVay trimmed the roster to 53 players, the Rams re-signed to their practice squad 14 players who went unclaimed, including veteran linebacker Micah Kiser.

The roster is expected to go through more iterations before the Sept. 12 opener against the Chicago Bears on “Sunday Night Football.”

When asked to grade the Rams’ offseason, Snead answered by comparing it to a term paper.

Is Snead confident that it is a Super Bowl-caliber roster?

“That’s the top of the mountain,” Snead said of the Super Bowl. “But we’re at base camp and we’re ready to start climbing.”

After Hekker agreed to restructure his contract — the NFL’s richest for a punter — the Rams traded Corey Baroque and a 2023 seventh-round draft pick to Green Bay for a 2023 sixth-round pick. Snead declined to discuss how the Rams restructured a deal that had called for Hekker to carry a salary-cap number of $4.9 million this season.

But the 24-year-old Bojorquez’s dynamic preseason performance, and what would probably would have been impending free agency after the season, made for a “a little bit of a conundrum,” Snead said.

“Johnny really wanted to be here, would love to finish his career in Los Angeles,” Snead said. “He’s been a pillar.”

“At one time, Johnny did, but at this stage maybe he doesn’t have that driver that Corey has,” Snead said.

But Hekker’s value as passing threat — he has completed 13 of 22 passes for 184 yards and a touchdown — are among “interesting nuances Johnny brings to the table,” Snead said.

The Rams kept quarterback Bryce Perkins on the roster rather than expose him to a possible waiver claim. Snead said that was done in part to prevent other teams from benefiting from the training the Rams provided Perkins.

“If they do get claimed,” he said of quarterbacks, “a lot of training that goes into it is gone in a heartbeat.”

Stafford was a given a veteran’s day off, offensive coordinator Kevin O’Connell said. … Donald was absent because his family is expecting a child soon, a Rams official said. … Running back Sony Michel, who had been wearing No. 14, has switched to No. 25. … The 14 players signed to the practice squad: Kiser, outside linebacker Justin Lawler, defensive linemen Earnest Jones IV and Marquise Copeland, defensive backs Dont’e Deayon, Kareem Orr and Tyler Hall, running back Otis Anderson, receivers Landen Akers and J.J. Koski, tight end Kendall Blanton, guard Jeremiah Kolone, tackles Chandler Brewer and Max Pircher, who as an international player is exempt.

Loading...
Denial of responsibility! TechiLive.in is an automatic aggregator around the global media. All the content are available free on Internet. We have just arranged it in one platform for educational purpose only. In each content, the hyperlink to the primary source is specified. All trademarks belong to their rightful owners, all materials to their authors. If you are the owner of the content and do not want us to publish your materials on our website, please contact us by email – [email protected]. The content will be deleted within 24 hours.
dreamsFeelingfieldnews updateRamsrealRevampedroster
Share

Facebook Says It Took Action on 33.3 Million Indian Posts: Find Out Why