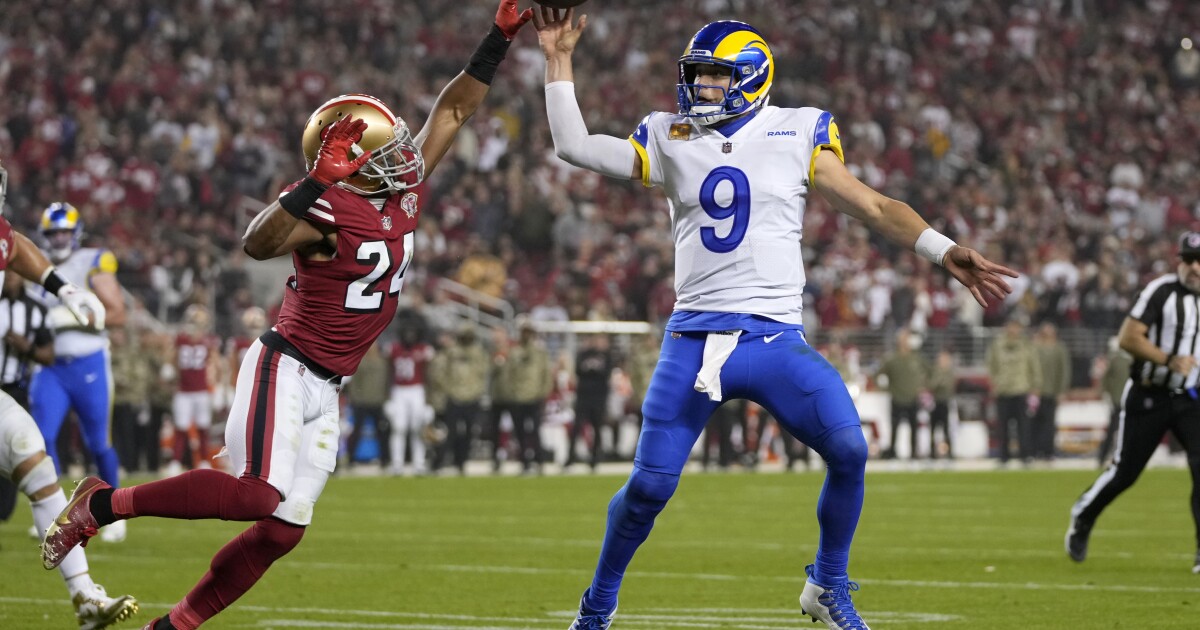 It will be a different sort of Thanksgiving for Rams quarterback Matthew Stafford.

Before he was traded to the Rams in January, Stafford spent 12 years playing for the Detroit Lions, who play a home game on Thanksgiving Day every season.

The Rams (7-3) have a walkthrough Thursday, but they don’t play until Sunday when they take on the Green Bay Packers (8-3) at Lambeau Field.

“I loved playing on Thanksgiving for the tradition, for the game, for all of that,” Stafford said Wednesday, adding that he was always home in time for Thanksgiving dinner with his family. “It was a lot of fun having the next couple days off. You could eat leftovers and do all that fun stuff.”

Stafford is looking forward to returning to Lambeau Field. He has a 7-13 record against the Packers and a 3-7 record at the historic stadium. But that does not dampen his love for playing at what he described as “one of my favorite places to play” in the NFL.

“I remember 2011 like it was yesterday,” he said, before recounting details of the game.

The forecast for Sunday calls for partly cloudy conditions with temperatures in the high 30s. If that forecast holds, it will preclude Stafford from enjoying one of his favorite Lambeau Field pastimes.

“I love playing in the snow there,” he said. “That’s what you dream about as a kid is getting to play the Packers at Lambeau Field in the snow.

“So, don’t think it’s going to snow this week, but it will be nice and chilly, which is always fun.”

Stafford is aiming to recapture the form that made him a staple of NFL most-valuable-player conversations through the first eight games of this season.

He has passed for 24 touchdowns, with eight interceptions.

But four of those interceptions occurred in the last two games — and two were returned for touchdowns. The turnovers put the Rams in deep holes that led to defeats by the Tennessee Titans and San Francisco 49ers.

Stafford has played through back stiffness and a left ankle sprain, so last week’s open date gave him time to heal physically and reset mentally.

Kevin O’Connell, offensive coordinator and quarterbacks coach, said “there’s a lot of really good stuff” in Stafford’s performance through 10 games. But the Rams collectively must improve their starts on offense.

“Like he’s done throughout his whole career, just picking his spots to really understand when to maybe push the limits on a decision and trust his ability to make some tight-window throws versus checking the ball down, throwing completions and getting drives off to a good starts,” O’Connell said.

The Rams cannot afford to fall behind early against a Packers team led by quarterback Aaron Rodgers.

Last season, in his most recent appearance at Lambeau Field, Stafford passed for two touchdowns, with an interception, in a 42-21 Lions defeat.

Now he returns with the Rams, who lost an NFC divisional-round playoff game at Lambeau Field last January.

“He’s familiar with the venue, he knows their personnel,” coach Sean McVay said, adding, “He also realizes what a special venue it is, how difficult it is to go there and to compete to try to be able to get a win.

“But I know he’s excited about that.”

Outside linebacker Leonard Floyd, who remains in concussion protocol, did not practice because of illness, McVay said. The illness is not COVID-19 related, he said. Floyd’s absence is not expected to affect his ability to be cleared to play Sunday, McVay said. … Cornerback Dont’e Deayon did not practice because of a thigh issue, according to the injury report. … The Rams were scheduled to practice Thursday, but because of expected windy conditions, the workout was changed to a walk-through.

Denial of responsibility! TechiLive.in is an automatic aggregator around the global media. All the content are available free on Internet. We have just arranged it in one platform for educational purpose only. In each content, the hyperlink to the primary source is specified. All trademarks belong to their rightful owners, all materials to their authors. If you are the owner of the content and do not want us to publish your materials on our website, please contact us by email – [email protected]. The content will be deleted within 24 hours.
BaydreamsfieldGreenMatthewnews updatePackersplaying
Share