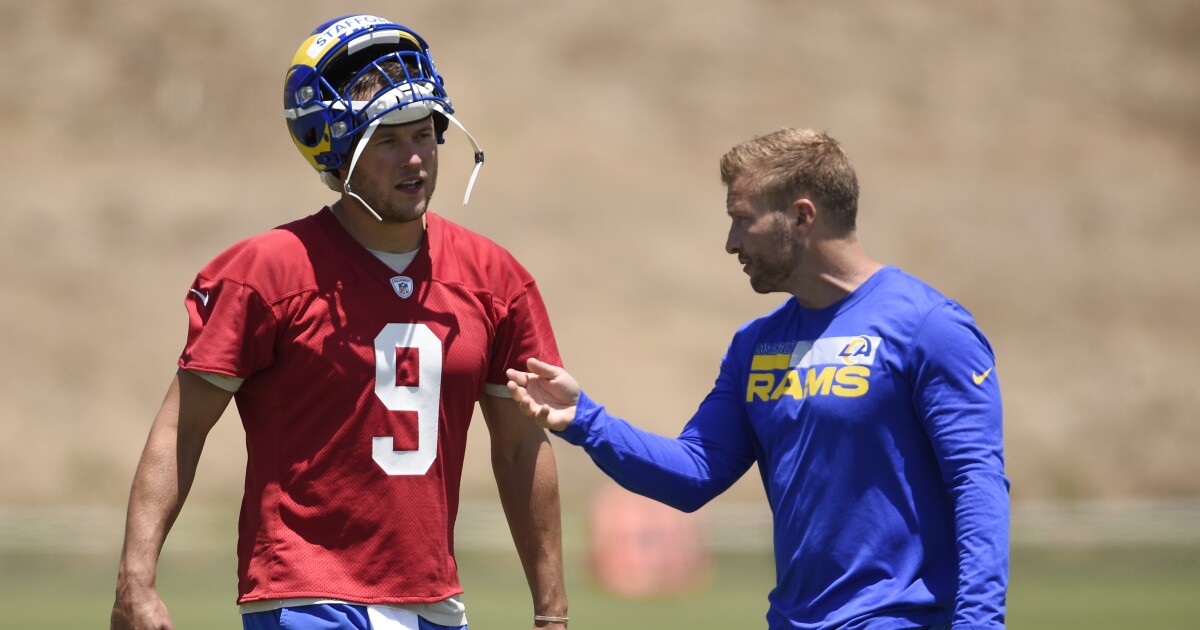 Breaking down how the Rams (10-6 last season) and the Chicago Bears (8-8) match up heading into their season-opening game at 5:20 Pacific time Sunday at SoFi Stadium. The game will be carried on NBC (Channel 4).

When Rams have the ball: After playing 12 seasons with the Detroit Lions, quarterback Matthew Stafford gets a fresh start with a Rams offense that has potential to be one of the most dynamic in the NFL. Stafford can deliver passes from all angles and is expected to be especially effective on deep throws, a factor sorely missing from Sean McVay’s offense last season. The Rams signed veteran receiver DeSean Jackson, who has averaged 17.4 yards per catch in 13 NFL seasons, to stretch defenses for big plays and create space for receivers Robert Woods and Cooper Kupp and tight end Tyler Higbee. With running back Cam Akers sidelined for the season because of an Achilles injury, Darrell Henderson and Sony Michel give the Rams a solid running back tandem. Henderson has impressed when physically sound, but durability is a question. Michel is a proven big-game performer. First-year Bears defensive coordinator Sean Desai deploys a veteran unit. Outside linebacker Khalil Mack is still a force, but he has not recorded 10 sacks in a season since 2018. Roquan Smith anchors a linebacker unit that includes former Rams Robert Quinn and Alec Ogletree. Safety Eddie Jackson leads the secondary.

When Bears have the ball: The Bears selected quarterback Justin Fields with the 11th pick in the draft, but coach Matt Nagy will start veteran Andy Dalton against the Rams. Dalton, 33, was a three-time Pro Bowl selection during nine seasons with the Cincinnati Bengals but has since become a journeyman with stops in Dallas and now Chicago. Rams defensive coordinator Raheem Morris, having watched what the New Orleans Saints have done historically with two quarterbacks and what the San Francisco 49ers appear to be adopting, also is preparing for Fields to play in packages. David Montgomery starts at running back for an offense that also features receiver Allen Robinson and tight ends Cole Kmet and Jimmy Graham. Morris is expected to build on the scheme that Brandon Staley installed last season before leaving to become coach of the Chargers. Lineman Aaron Donald, a three-time NFL defensive player, and All-Pro cornerback Jalen Ramsey lead the Rams. Ramsey is expected to be deployed in even more varied roles than last season, including as a pass rusher. Edge rusher Leonard Floyd, discarded by the Bears after the 2019 season, had two sacks against the Bears last season. Safety Jordan Fuller will call defensive signals.

When they kick: Rams punter Johnny Hekker, looking to rebound from a 2020 performance not up to his All-Pro standard, begins his 10th season. Hekker was sidelined for two preseason games because of COVID-19. Matt Gay is the kicker, and Matthew Orzeck the new long snapper. Former Rams punt returner Nsimba Webster now plays for the Bears.

Gary Klein’s prediction: McVay finally got the kind of quarterback he has pined for, and he almost certainly will call for deep passes and show the NFL that he remains one of the league’s elite offensive minds.

Denial of responsibility! TechiLive.in is an automatic aggregator around the global media. All the content are available free on Internet. We have just arranged it in one platform for educational purpose only. In each content, the hyperlink to the primary source is specified. All trademarks belong to their rightful owners, all materials to their authors. If you are the owner of the content and do not want us to publish your materials on our website, please contact us by email – [email protected]. The content will be deleted within 24 hours.
Loading...
BearsBeginschicagoFreshmatchupsMatthewnews updateRams
0
Share