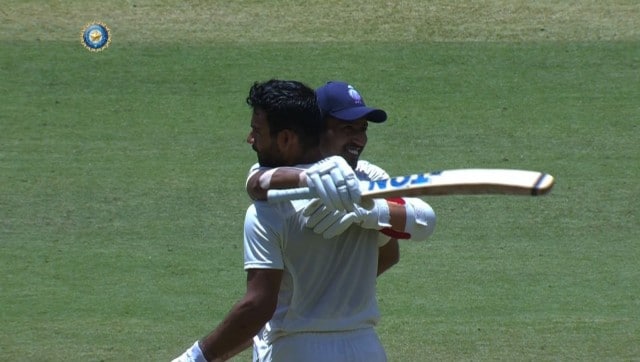 Bengaluru: Madhya Pradesh dominated with the bat on Day 3 of the Ranji Trophy final against Mumbai on Friday. Being played at the M Chinnaswamy Stadium in Bengaluru, MP were 368/3 at stumps, trailing Mumbai by just six runs.

Yash Dubey and Shubham Sharma slammed 133 runs and 116 runs respectively in what was a tough day in the field for Mumbai bowlers who were made to toil. Later, in-form Rajat Patidhar added to Mumbai’s misery by remaining unbeaten on 67 runs.

Dubey and Sharma put together 222 runs for the second wicket. This was followed by 72 runs coming between Patidhar and Dubey.

MP enjoyed their share of luck on the day with Sharma dropped when he was on 55 runs. Tushar Deshpande drew a sliced drive but Armaan Jaffer dropped the chance when MP were 148/1. Later, Patidhar was dismissed off a Shams Mulani no-ball when he was on 52 runs.

After a wicketless opening session, Sharma fell to Mohit Avasthi with the score at 269/2. At 341/3, Dubey departed to Mulani.

In the first session, Dubey brought up his second first-class century just before lunch interval from 234 balls. The 23-year-old Dubey has had a strong couple of matches in the domestic competition. He scored an unbeaten 85 against Meghalaya and 289 against Kerala to go with the century today.

Dubey swept a full ball from Tanush Kotian to fine leg, beat the fielder stationed at short fine leg to bring up the century.

Mumbai’s first cause for celebration came after 34 overs when Mulani got Dubey to defend forward only to bring out at an edge which carried to keeper Hardik Tamore.

Like Dubey, Sharma also brought up his century with a boundary. A cover drive brought up his ton and took the pairing past the 200-run partnership mark.

In the 90th over of the innings, Sharma walked down the track and looked to play a teasing delivery around sixth stump. Just a ball after surviving a close caught-behind, he finally perished for MP’s third wicket.

Madhya Pradesh are looking to win their first Ranji Trophy title against 41-time winners Mumbai who had posted 374 runs on the board in the first innings. By taking a first innings lead, MP would be in the driving seat for the trophy unless something changes dramatically in the next two days.

For Mumbai, Sarfaraz Khan and Yashasvi Jaiswal had starred with the bat scoring 134 and 78 runs respectively.

Denial of responsibility! TechiLive.in is an automatic aggregator around the global media. All the content are available free on Internet. We have just arranged it in one platform for educational purpose only. In each content, the hyperlink to the primary source is specified. All trademarks belong to their rightful owners, all materials to their authors. If you are the owner of the content and do not want us to publish your materials on our website, please contact us by email – [email protected]. The content will be deleted within 24 hours.
centuriesDayDominateDubeyFinalFirstcricketFirstpostMumbai
Share

Meta Made Millions in Ads From Networks of Fake Accounts

This new iOS 16 feature is so useful, but no one knows about it