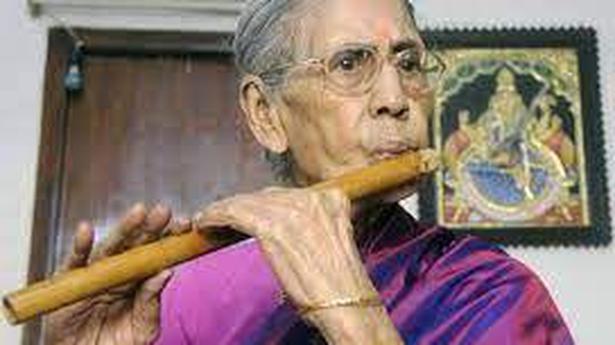 The students of Mayavaram Sarawathi Ammal, popularly known as Mayavaram Papa, organised some special events along with Bilvamusic Academy and a few other organisations to mark their guru’s birth centenary.

Born on September 3, 1921 in Mannargudi near Tiruvarur, Saraswathi Ammal’s family was deeply into music. At age seven, she began learning to play the flute from Peruncheri Muthu. She later trained under Cholavaram Subbaiah Pillai and Tirupambaram Swaminatha Pillai. Saraswathi Ammal also took lessons in vocal music from Mayavaram Venugopala Iyer. By 16, she began performing in public.

A top-grade vocalist of AIR, she shifted to Chennai in 1942 and lived in Mylapore. Here, she enhanced her musical skills by further training under Patamadai Sundaram, Patamadai Krishnan, Thanjavur Sankara Iyer, and Ramnad Krishnan. Besides performing flute recitals at temples and sabhas, she began accompanying stalwarts. She also played the flute for well-known dancers Padma Subrahmanyam and Vyjayantimala Bali

With her love for the veena, Saraswathi Ammal learnt to play the instrument from the legendary Pichumani Iyer and later, M.A. Kalyanakrishna Bhagavatar. Keen to share her vidwat with young enthusiasts, she began teaching vocal music, flute and the veena. She realised she enjoyed teaching more than performing.

She also took to composing and has many devotional songs to her credit. Her songs were released in two CDs titled, ‘Deiveega Pamalai’ and ‘Baba Nin Karunai Vendum’.

Her many awards include a citation from Ramani’s Academy of Flute, Chennai, and ‘Sangeetha Seva Nirata’ title by Sri Thyagaraja Sangeetha Vidwath Samajam, Mylapore, with which she was associated since its inception. She received the Lifetime Achievement award at Vijay TV’s Women’s Day celebrations in 2011, and was chosen for the Sangeet Natak Academy Tagore Puraskar in 2012.

Saraswathi Ammal passed away on August 17, 2013, a few days before her 93rd birthday.

The writer is a disciple of Saraswathi Ammal.

Denial of responsibility! TechiLive.in is an automatic aggregator around the global media. All the content are available free on Internet. We have just arranged it in one platform for educational purpose only. In each content, the hyperlink to the primary source is specified. All trademarks belong to their rightful owners, all materials to their authors. If you are the owner of the content and do not want us to publish your materials on our website, please contact us by email – [email protected]. The content will be deleted within 24 hours.
Loading...
Ammalentertainment newsEntertainment updateFlautists Mayavaram PappaGuruGuru and vainika Mayavaram PappaK. BhaskaranMayavaram
Share