Notice: amp_is_available was called incorrectly. `amp_is_available()` (or `amp_is_request()`, formerly `is_amp_endpoint()`) was called too early and so it will not work properly. WordPress is currently doing the `pre_get_posts` hook. Calling this function before the `wp` action means it will not have access to `WP_Query` and the queried object to determine if it is an AMP response, thus neither the `amp_skip_post()` filter nor the AMP enabled toggle will be considered. It appears the theme with slug `publisher` is responsible; please contact the author. Please see Debugging in WordPress for more information. (This message was added in version 2.0.0.) in /home/runcloud/webapps/techilive/wp-includes/functions.php on line 5313
 Remittances up for 2nd straight month - BusinessWorld - TechiLive.in This helped push first-quarter remittances by 2.6% higher at $7.593 billion, data from the central bank showed on Monday.

“This is the second consecutive month that remittances were higher than last year’s levels, reflecting mainly the easing of travel restrictions, re-opening of borders to foreign workers, and progress in COVID-19 vaccine rollout in many advanced countries,” the Bangko Sentral ng Pilipinas (BSP) said in a statement.

The March growth rate is also a reversal from the 4.7% contraction seen in the same month in 2020, when countries around the world began lockdowns to curb the spike in COVID-19 cases.

“OFWs who are medical professionals in host countries have supported the continued growth in OFW remittances since the pandemic,” Rizal Commercial Banking Corp. Chief Economist Michael L. Ricafort said in a Viber message.

Essential workers are not limited to the healthcare sector but also include skilled employees that are much needed in economic recovery, Asian Institute of Management economist John Paolo R. Rivera said.

“People in construction, electricians, housekeeping, and other skilled labor were also in demand abroad to help reboot the economies of their host economies. Some professionals and highly skilled workers have also been deployed when economies started to open slowly,” he said in a Viber message.

In March, the United States remained the country’s top source for remittances, followed by Singapore, Saudi Arabia, Japan, the United Kingdom, the United Arab Emirates, Canada, Qatar, Taiwan, and Malaysia. Together, they accounted for 78.2% of the total cash remittances.

Remittances are crucial in supporting household spending which makes up 70% of the country’s economy. Last year, remittance inflows dropped by 0.8% to $29.903 billion, the first annual decline since 2001 as some OFWs lost their jobs amid the global health crisis.

Remittances will likely continue to grow in the next few months given migrant workers’ tendency to become altruistic in times of need, Mr. Ricafort said.

“Tighter quarantine restrictions in NCR (National Capital Region) Plus since the latter part of March amid new record high COVID-19 local cases recently could also increase the need to send more remittances to assist adversely affected dependents in the country,” he said.

Tighter quarantine restrictions in Metro Manila and nearby provinces were implemented since late March until early May. The areas are currently under a more relaxed general community quarantine (GCQ) with “heightened restrictions” until the end of May.

For Mr. Rivera, the remittance outlook is still clouded by the COVID-19 situation in the Philippines and overseas.

He cited Hong Kong, a host country for many domestic helpers, which imposed a two-week travel ban for flights from the Philippines due to the recent surge in COVID-19 cases.

COVID-19 cases in the Philippines surpassed the one million mark in March. The Health department reported 5,979 new infections on Monday, with active cases currently at 54,235.

The country has already recorded COVID-19 cases with the “double mutant” Indian variant as well as other variants deemed to be more infectious by health authorities.

The BSP is hopeful that remittances will recover this year with a growth of 4%. 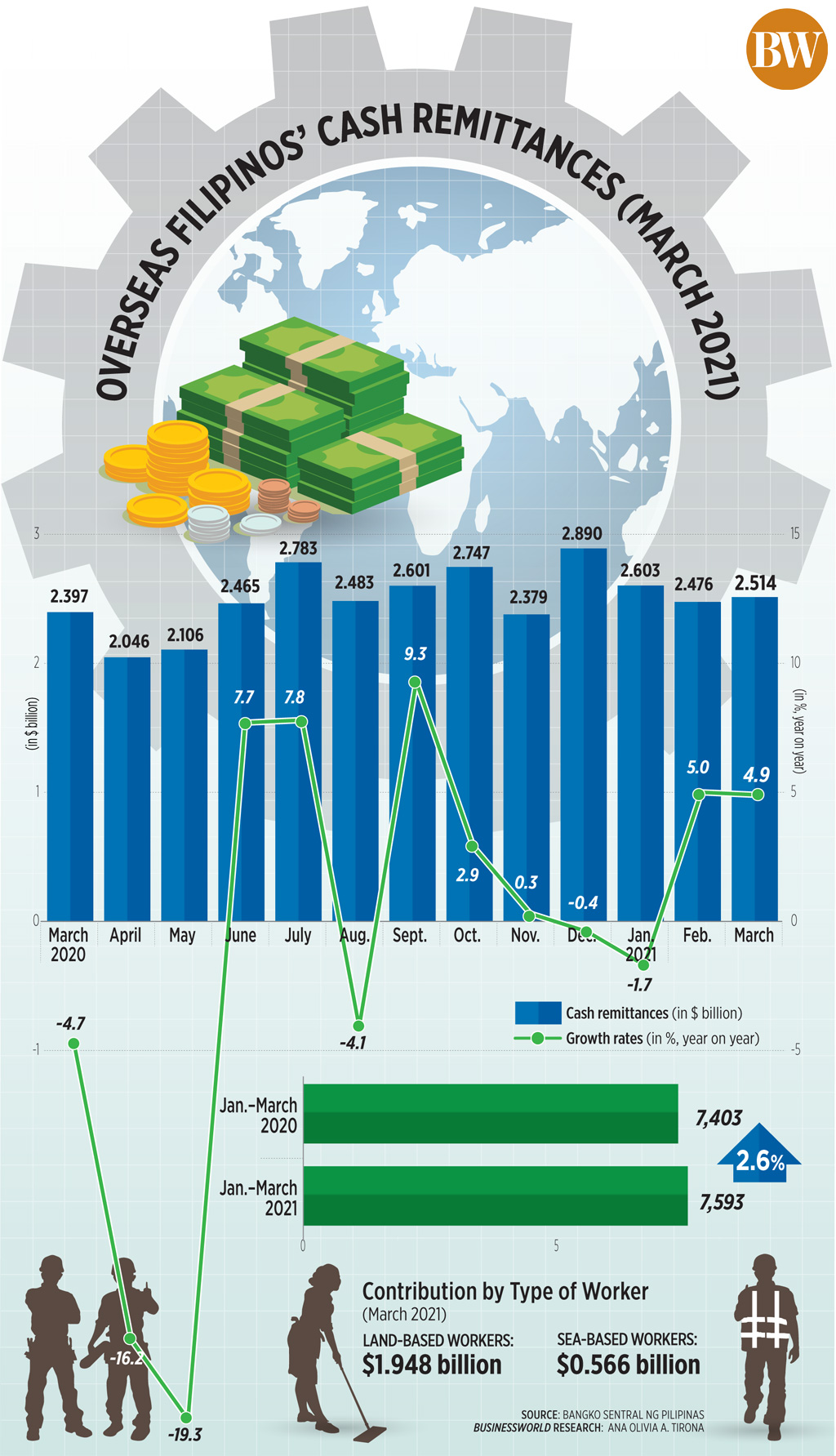 Denial of responsibility! TechiLive.in is an automatic aggregator around the global media. All the content are available free on Internet. We have just arranged it in one platform for educational purpose only. In each content, the hyperlink to the primary source is specified. All trademarks belong to their rightful owners, all materials to their authors. If you are the owner of the content and do not want us to publish your materials on our website, please contact us by email – admin@techilive.in. The content will be deleted within 24 hours.
2ndBusinessWorldEducation newsEducation updatemonthnews updateRemittancesstraight
0
Share