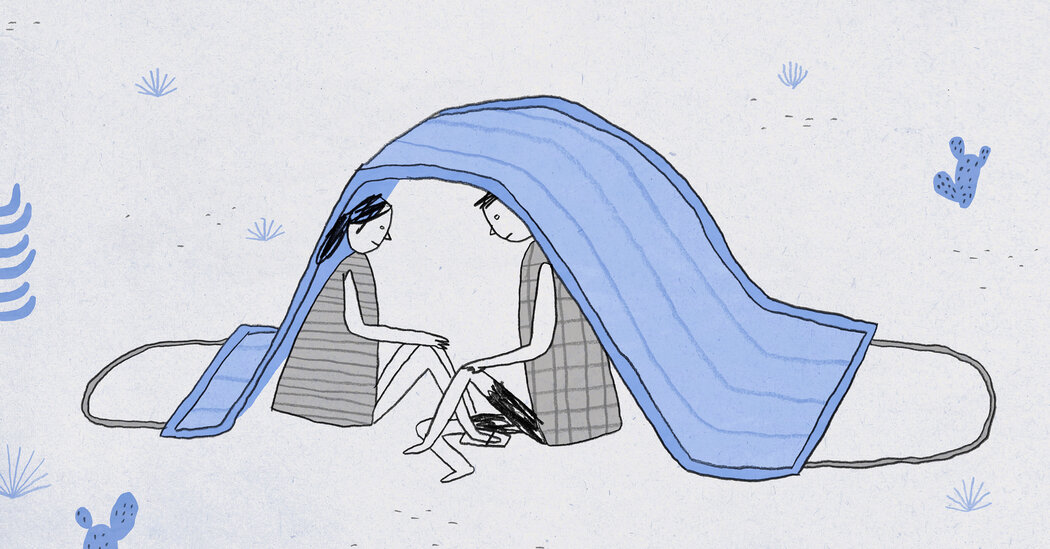 Remote Work Gave Us a Life Together. Now What?

Before the pandemic, I measured the distance between me and Matt in increments of travel. Fifteen hours by car from Ventura, Calif., to Santa Fe, N.M. If I flew, it was two hours in traffic to LAX, then a two-hour flight to Albuquerque and another hour on the shuttle bus to the adobe casita where he stayed up late with the porch light on, waiting for me.

Sometimes I would go to the smaller, mission-style airport in Santa Barbara, which was 30 minutes away, then take two connecting flights from there, praying not to get stuck in Phoenix or Denver, though I often did, losing precious hours at airport gates.

When Matt came to see me, it was the same, except I waited up for him.

Matt and I met years earlier in Santa Fe while working as editors at the same magazine. We were friends before we started dating. Two years in, as we were approaching the point of deciding how serious we were about each other, I got a job offer in Ventura. It was a good opportunity, but it didn’t make sense for Matt to leave his job to come with me, or for me to pass it up and stay.

We were in our late 20s by then, trying to figure out our lives and work and relationships, a process made more difficult by high costs of living and careers in an industry that often felt like it was fading before our eyes.

I said I would give it a year in Ventura, but one year quickly turned into two, then three. And all the while we stayed together. Afraid to put down roots in California and to save money for plane tickets, I decided not to sign a lease, instead bouncing between friends’ couches, the back seat of my car and house-sitting gigs, sometimes staying in discount hotels or evading the office security guard to curl up in a sleeping bag under my desk at work.

Matt called me every night to reassure me that we were each other’s home, and we would figure it out, but it felt impossible. For Christmas he bought me carbon offsets equal to a circumnavigation of the earth, which is about how many miles I had traveled to see him.

When I finally gave in and rented an apartment, he and I would stay up late doing the crossword on FaceTime with our dog, Meru, curled up at my feet. Every conversation we had before saying good night ended with the same refrain:

Then it was March 2020, and a new virus was spreading. Antibacterial wipes showed up on conference room tables as infections crept closer. My mother called one day after a shift at the hospital where she works as a recovery room nurse to tell me she was starting to worry. No one knew what to do.

I joked to my boss: “If we go into a quarantine situation, can I go to New Mexico?”

“Of course,” he said with an “it’s never going to happen” shrug.

I read the news and bought extra beans and rice and dog food and wondered about water. I had been through a series of fire evacuations over the previous few years, but how was a person supposed to prepare for a pandemic?

It rained the day I left California, the scary kind that sets off mudslides and makes Californians drive like the road is covered in black ice. I left after work and drove until I couldn’t anymore as rain turned to sleet on I-40, rushing off the backs of hundreds of semi-trucks and slamming into my windshield, blurring the road.

Once on this drive, I ran out of gas only eight miles west of Seligman, Ariz. It was 2 a.m., and I called Matt. An hour later, a tow truck showed up, and I limped into the Chevron station, frightened and tired.

This time, I refilled the tank more often than necessary and took pictures of the cheeky virus prevention signs at rest stops (“Wash your hands like you’ve just got done slicing jalapeños for a batch of nachos and you need to take your contacts out.”) In Flagstaff, I slept in the Whole Foods parking lot and woke up to snow.

When I finally got to Matt’s place the next day, he was a mess, doomscrolling himself into an unprecedented state of anxiety, too worried even to hug me. For better or worse, he always has been able to maintain some distance from difficult emotions, but in this case, they’d come crashing through. We talked about it, the way the news was making him feel like he had no control, and eventually some of the anxiety abated.

Months passed as it gradually became clear I wasn’t going back to California anytime soon. Amid the mask mandates and choropleth hospitalization maps, we settled into something we’d never had: a life together.

We planted squash and kale and tomatoes in the yard and made coffee for each other and went running. We did laundry, swept the floor, scrubbed hard water stains from the shower walls. I took online yoga classes as Matt critiqued my form from the couch while eating oatmeal out of our only bowl. And Meru stopped shredding books — the thing she always did when one of us left.

In August, we drove out to California in a U-Haul cargo van and moved everything out of my apartment, stopping in Big Sur on the way and sleeping in the van when we couldn’t find a spot to camp. Even my succulents made it intact all the way back to New Mexico, where we squeezed our combined lives into his tiny Santa Fe casita, despite our longstanding bewilderment at the fact that it only has one drawer.

We pickled the last of our summer tomatoes, read books, waxed our skis for winter and organized the shed. We worried as ICU beds filled and the news got worse. We shoveled snow.

In the before-time, our hours together were urgent, filled with the sense that everything had to fit into a few days: excitement at seeing each other, a fight about something, seeing friends, meeting somewhere new on those occasions when we could both get away.

Now we reveled in the exquisitely mundane experience of simply living with the person you love. As the loneliness of our long-distance life lifted, our relationship grew and deepened. Our families joked that all it took to bring us together was a once-in-a-century pandemic.

We felt guilty for being happy — we had jobs, a place to live and each other — and kept reminding ourselves how lucky we were to find this silver lining during such a dark and painful time.

And then it was April 2021, and vaccines were available, so we drove down to the Santo Domingo Pueblo health care center to get our shots. Emerging from our separate booths, our eyes met. The look that passed between us was one of gratitude but also understanding: the end of the pandemic might also mean we would be pulled apart again.

Early in the summer, as things started to open up, Matt and I attended my brother’s wedding in Montana and hugged family for the first time in a year. We had friends over for dinner and toasted promotions in a bar without masks. And all the while, we waited for news from my work in Ventura.

Then, of course, the Delta variant reeled us back toward everything we thought we were leaving behind: masks, distancing, overflowing hospitals and uncertainty about returning to work. At the same time, it has extended our time together, which causes such an incongruous and twisted feeling.

Nobody wants this pandemic to go on. The suffering and losses have been incalculable. And yet this strange set of circumstances has also allowed us to start our life together.

For now, we wait. And we return to our refrain from nearly two years before:

This time, though, whether here or there, we know we’re going to do it together. This time, for the first time, that feels possible.

Denial of responsibility! TechiLive.in is an automatic aggregator around the global media. All the content are available free on Internet. We have just arranged it in one platform for educational purpose only. In each content, the hyperlink to the primary source is specified. All trademarks belong to their rightful owners, all materials to their authors. If you are the owner of the content and do not want us to publish your materials on our website, please contact us by email – [email protected]. The content will be deleted within 24 hours.
gavelifelifestyle newslifestyle updatenews updateremotetechi liveWork
Share