Notice: amp_is_available was called incorrectly. `amp_is_available()` (or `amp_is_request()`, formerly `is_amp_endpoint()`) was called too early and so it will not work properly. WordPress is currently doing the `pre_get_posts` hook. Calling this function before the `wp` action means it will not have access to `WP_Query` and the queried object to determine if it is an AMP response, thus neither the `amp_skip_post()` filter nor the AMP enabled toggle will be considered. It appears the theme with slug `publisher` is responsible; please contact the author. Please see Debugging in WordPress for more information. (This message was added in version 2.0.0.) in /home/runcloud/webapps/techilive/wp-includes/functions.php on line 5313
 Researchers create new zinc-air pouch cells - TechiLive.in 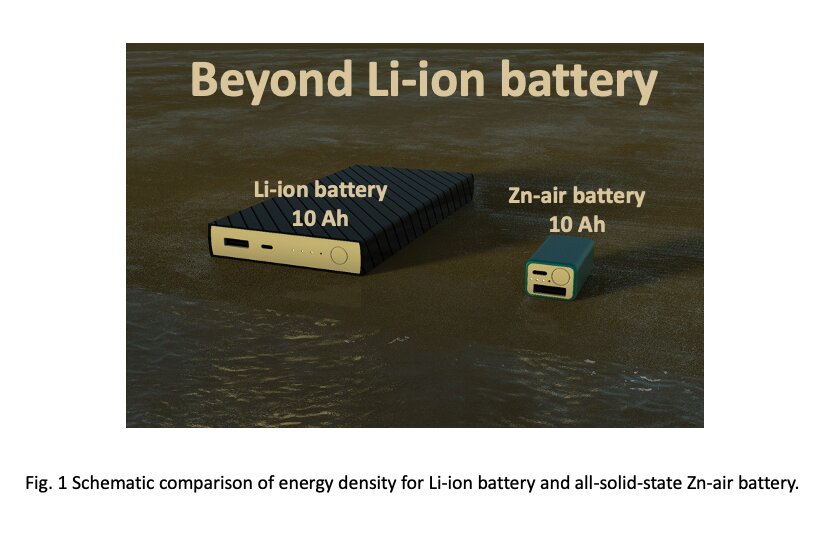 Zinc-air batteries (ZABs) are among the most promising next-generation battery technologies due to their many advantageous characteristics. Most notably, these batteries have unique half-open structures, a significant theoretical energy density (1,086 and 1,370 Wh kg−1 when including and excluding oxygen, respectively), flexible electrodes and an inherently aqueous electrolyte. Moreover, in contrast with other materials used in batteries, Zinc (Zn) is less harmful for the environment and more abundant.

Researchers at Hanyang University in South Korea recently designed a new type of zinc-air pouch cell that can outperform other commercially available battery technologies. These pouch cells, presented in a paper published in Nature Energy, use (101)-facet copper phosphosulfide [CPS(101)] as a cathode, anti-freezing chitosan-biocellulosics as super-ionic conductor electrolytes, and patterned Zn as the anode.

“Previous ZABs employing liquid (6 M KOH) electrolytes failed because of the sluggish kinetics for the oxygen reduction and evolution reactions (ORR/OER) and irreversibility of Zn accompanying the parasitic reactions over wide temperatures,” Jung-Ho Lee, one of the researchers who carried out the study, told Tech Xplore. “This feature inspired us to develop solid-state electrolytes, such as functionalized biocellulose, capable of transferring OH– ions effectively without parasitic reactions.”

The FBN-based electrolyte created by Lee and his colleagues in their previous work exhibited a high ion conductivity of 64 mS cm-1 at room temperature. However, the researchers found that it did not work at subzero and high temperatures, due to issues associated with water freezing and volume expansion.

“The two key processes we used (TEMPO oxidation and DBO quaternization) significantly improved the batteries’ anti-freezing characteristics, as well as their resistance toward swelling, compatibility for crosslinking, and ion-discerning property,” Lee said. “Water also exists and transfers inside CBCs, but its form is molecular water, not liquid water. As a result, we could obtain superior battery performance and a good stability even at -20 °C.”

The CBC-based membrane electrolytes fabricated by Lee and his colleagues were ion-exchanged using a mixture of hydroxide solutions. They thus displayed a lower pH than more conventional alkaline electrolytes. The nano-fibrous CPS(101) prepared by the researchers was specifically synthesized for pouch cells applications.

“Since the optimal stoichiometric ratio of CPS(101) is C:P:S = 1:0.5:0.5, the variation of the stoichiometric ratio is critically influencing the electrochemical performances during cell operations,” Lee said. “Phosphorus and sulfur anions spatially conjugated with equal coordination (same amount of Cu-S and Cu-P bonds) to copper cations preserved fairly stable short- and long-range order structures during subsequent cycles.”

While the Zn-air pouch cell fabricated by the researchers was operating, if the FBN membrane was unable to form the solid-electrolyte interphase (SEI), CBCs generated a robust SEI layer, which led to a superior cycle life. Moreover, CBCs protected the anode surface from corrosion and side reactions. This could promote longer cycles compared to those achieved by batteries with aqueous electrolytes or other solid-state electrolytes.

“The superior conductivity recorded at room temperature (86.7 mS cm-1) is the champion value reported to date for hydroxide superion conductors, which is twice as high as that of commercial A201,” Lee said. “A 5-µm-thin, 900-cm2-size CBCs membrane can be simply cast with exceptional mechanical robustness even at a cold temperature of -20 oC in dry ambient, whereas FBN, A201, or polysulfone readily degrades into small fragments.”

The general requirements for next-generation batteries are a cell-pack-level energy density of >300 Wh kg−1, US$75 kWh−1, a fast-charging capacity in 15 min (at least 80% charging), and the ability to operate at a wide range of temperatures. To meet these requirements, battery designers must overcome a series of limitations, while also ensuring that the batteries are safe, electrochemically/mechanically stable, built with materials that are abundant on Earth and easy to recycle, and functioning well at a broad range of temperatures.

ZABs developed in the past achieved very low energy densities at a cell level, typically of cell-1 at a low current density of -2 and only operating at room temperature. These energy densities are significantly lower than those deemed appropriate for a next-generation battery’s commercialization.

“Most reported Zn-air cells are likely to follow shallow cyclings of 5-10% depth of discharge (DOD), which is unable to achieve the competitive cell-energy to the Li-ion batteries,” Lee said. “Even though few previous reports retained the required areal energy of 35 mWh cmgeo-2, their cycle life and DOD were restricted to below 100 cycles and DOD of 5-10%, respectively. At least 20% DOD is necessary to obtain specific energy of 120 Wh kgcell-1, however, no previous work followed these minimum standards required for commercial batteries.”

In their paper, Lee and his colleagues introduced one-ampere-hour (Ah) flexible zinc-air pouch cells that could be commercially viable, as they exhibit ultrahigh cell-level energy densities (460 Wh kgcell−1 and 1389 Wh l-1) at wide range of temperatures (-20 to 80 oC), with a high rate capacity of 5-200 mA cm-2 over 6000 cycles for 20% DOD and 1100 cycles for 70% DOD. These pouch cells outperform many commercially available Li-ion batteries and other commonly used batteries.

“Our pouch cells showed the highest cell-level energy density of 523 ± 15 Wh kgcell-1 (volumetric energy density of ~1609 ± 35 Wh l-1) for 350 cycles with 70% DOD at a current density 25 mA cm-2 by optimizing the cell parameters,” Lee said. “We also showed that the volumetric energy density could be further increased to ~1800 Wh L-1 at pouch cell capacity of ~20 Ah by applying a bipolar stacking technology (increasing the number of stacks). These values allow for the driving range of ~800-900 miles per charge, 100% charging capability within 15 min, and the mileage durability of ~1 million miles.”

After they are tested further, the new zinc-air pouch cells could be produced on a large scale. According to Lee and his colleagues, they could potentially also be used to power drones, electric vehicles or electric short-distance aircrafts.

“We are now simplifying the synthesis recipes for CPS (air cathode) and CBCs (solid electrolyte) for production-worthy scaling up,” Lee added. “Although our ZABs normally operate at -20 to 80 oC, we also attempt to make an operation temperature range wider. In addition, we will consider using aluminum instead of zinc, to assess the potential of an aluminum-air battery.”

Loading...
Denial of responsibility! TechiLive.in is an automatic aggregator around the global media. All the content are available free on Internet. We have just arranged it in one platform for educational purpose only. In each content, the hyperlink to the primary source is specified. All trademarks belong to their rightful owners, all materials to their authors. If you are the owner of the content and do not want us to publish your materials on our website, please contact us by email – admin@techilive.in. The content will be deleted within 24 hours.
Cellscreategadget updatePouchresearcherstech newstech updatetechi live
0
Share