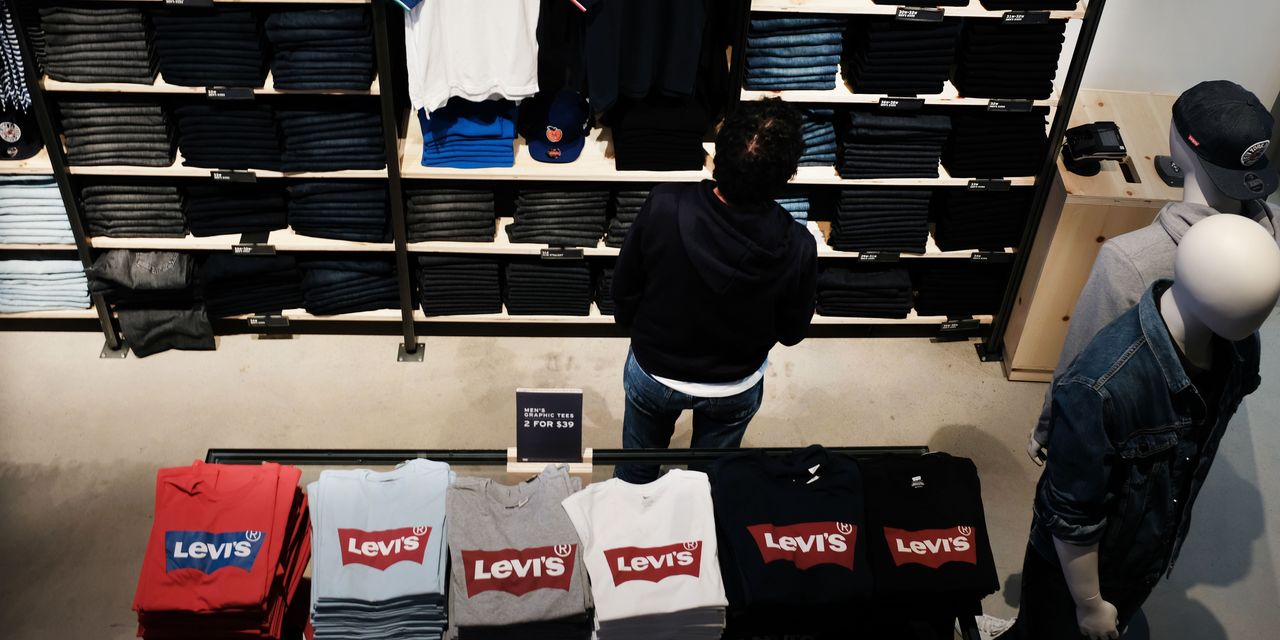 Michael Buchanan has held numerous jobs in his 15 years at Levi Strauss & Co., starting as a stock clerk and rising to store manager. At the end of May, he will add a new title to his résumé: data scientist.

Mr. Buchanan is one of 43 Levi’s employees enrolled in the San Francisco company’s machine learning bootcamp, a new program designed to teach coding and statistical analysis to people who don’t have a statistics or coding background.

Levi’s is confronting a problem faced by companies in a range of industries from finance to retail to technology. Many of their workers lack the necessary skills to address modern business challenges. For retailing, artificial intelligence and machine learning are playing an outsize role as more shopping shifts online.

are among the big retailers that will update investors on their operations this week, giving a snapshot not just on how much consumers are spending this spring but also on how they are finding workers in a revamped labor market.

U.S. job openings reached a record level of 8.1 million at the end of March, and hiring slowed in April. Last week

said it was offering $1,000 signing bonuses, while McDonald’s Corp. and

said they were raising wages.

There were 342,000 more retail job openings in March than in the same month a year ago, according to the Bureau of Labor Statistics. While some of that is due to the need for businesses to rehire as the pandemic eases, the job openings are the second-highest for March over the past decade and well above the five-year average for the month, according to the National Retail Federation.

The pandemic exposed a shortage of digital skills in retailing. Tens of thousands of retail workers were laid off a year ago as Covid-19-related restrictions required chains to close stores temporarily. Many have been rehired, but the jobs they are returning to aren’t always the jobs they left.

A tight labor market has made it harder for many chains to attract hourly staffers, while rising demand for computer scientists and engineers is leading to a shortage of workers with that expertise, executives said.

“It’s not like there is a large pool of talent out there working in this space,” said Mike Fogarty, chief executive of Choice Market, a Denver-based convenience store chain. “We want to upskill our employees from within.”

When Choice Market launched checkout-free shopping in April, allowing shoppers to leave the store without going to a cashier, it had to retrain employees at its four stores, including cashiers such as America Cardoza.

Ms. Cardoza, 21 years old, is now an e-commerce analyst in charge of data entry for the 2,500 products Choice Market sells. Instead of staffing a cash register, she uses a computer to create detailed drawings of the store layout so the system knows where products sit on shelves and monitors what is selling. She also runs the platform that integrates Choice’s third-party delivery systems with Uber Eats and

She learned her new skills from the company’s e-commerce manager.

“I’d never done anything like this before,” Ms. Cardoza said. “It’s very out of my range.”

closed most of its retail stores during the pandemic, it retrained 20,000 employees to handle new jobs ranging from sales to customer service. It plans to teach 100,000 employees new skills this year to prepare them for the demands of 5G, the next-generation wireless standard.

Walmart employees can earn a high-school or college degree for $1 a day through its partnership with Guild Education, which brokers deals between companies and colleges.

To select its first boot-camp class, Levi’s put more than 350 applicants through a three-month interview process that included computer modeling projects and a hackathon.

Those who made the cut left their jobs for two months to attend virtual classes for nine hours a day, five days a week. They studied statistics, coding, neural networks and other machine-learning skills.

“We are trying to democratize this field,” said

Levi’s chief strategy and artificial-intelligence officer, who led the creation of the program. “We had to choose people who have problem-solving skills and an ability to connect the dots.” She said there was so much interest that Levi’s is planning a second boot camp later this year.

What steps would you like to see companies take to narrow the skills divide in retail? Join the conversation below.

Dr. Walsh said a quarter of participants will change jobs, while the rest will go back to their roles.

One class tackles how to better match supply with demand. Another teaches how to personalize marketing campaigns, and a third looks at using artificial intelligence to determine which locations are best suited for new bricks-and-mortar stores.

Some attendees, such as Hazel King, a Levi’s IT director, are well-versed in computers, but their skills needed updating. Others, including Mr. Buchanan, the store manager, lack a college degree.

“I studied computer science in high school, but life happened and I didn’t pursue it,” said Mr. Buchanan, who is 38.

Ron Pritipaul, a 24-year-old design systems coordinator, said he learned how to scrape hundreds of images from the internet and classify them, a skill that could help Levi’s better predict fashion trends. “Sometimes, I’ll have a gut feeling about a trend, but these tools can help us pinpoint whether it’s cool or not,” Mr. Pritipaul said.

McKinsey & Co. estimates that replacing an employee can cost 20% to 30% of an annual salary on average. By contrast, retraining an employee costs less than 10% of annual pay. “For these reasons, we believe that reskilling will be a large part of the answer for retailers,” according to a 2019 report prepared by several McKinsey partners.

Deniz Caglar, a principal in the consulting practice of PricewaterhouseCoopers LLP, said retailers are ripe for this type of retraining because of e-commerce-fueled disruption. “Just about every retailer we work with is looking at doing some version of reskilling,” he said.

Mr. Buchanan at Levi’s said the digital training isn’t for everyone. “I told my dad what I’m doing, and he said ‘That sounds terrible,’” Mr. Buchanan said. “But the people in my classes are all really nerdy about it, because it’s fun.”

—Sarah Nassauer contributed to this article.

Denial of responsibility! TechiLive.in is an automatic aggregator around the global media. All the content are available free on Internet. We have just arranged it in one platform for educational purpose only. In each content, the hyperlink to the primary source is specified. All trademarks belong to their rightful owners, all materials to their authors. If you are the owner of the content and do not want us to publish your materials on our website, please contact us by email – [email protected]. The content will be deleted within 24 hours.
Loading...
amazon.comAMZNC&E Industry News FilterChipotle Mexican GrillChoice MarketclothingClothing/TextilesCMG
0
Share