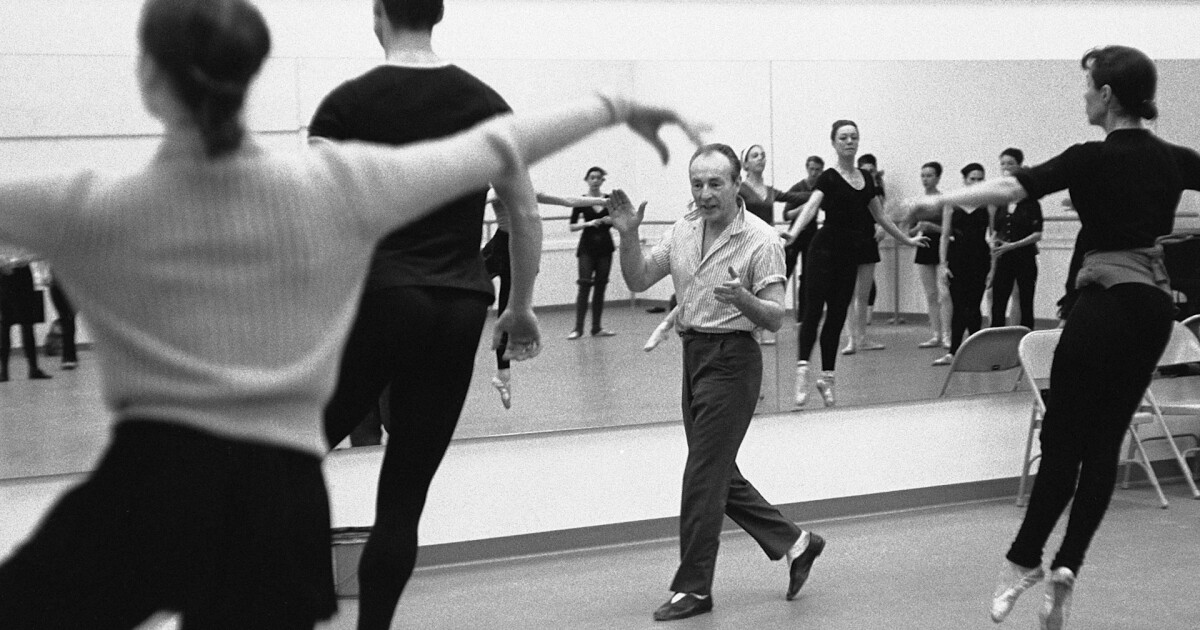 Review: A dance master’s teachings live on through his students ‘In Balanchine’s Classroom’

George Balanchine once said ballets are like butterflies, as if to suggest the beauty of a ballet performance was in the dancers’ ability to express the art in that moment, since it will be gone instantly. But underneath that sentiment was a richer truth: the hard work it took for the dancer to get to that place and, if one were taught by Balanchine himself, the lingering trust that something essential about dance could be passed on to others.

The before that made the now that secured the after could often be found in the intensive daily classes Balanchine ran for his company. They were, in one sense, where a kind of magic was prepared — but more specifically they were where bodies and drive were tested, technique was painstakingly refined, disciples might be forged and where the Russia-born master believed the legacy of ballet would be seeded. Connie Hochman’s fleet documentary “In Balanchine’s Classroom,” a remembrance of the immeasurably influential genius by those who danced for him at the New York City Ballet and were inspired to eventually teach others, is a lovingly narrated, archivally rich tour of that mysterious cocoon.

Early in the film, a grainy snippet of long-ago rehearsal footage acts as a visual metaphor for the movie’s portrait-to-be of a legend ever-present for his pupils: The view is of the stage from a darkened auditorium, and we see a pair of dancers working out steps under the lights, their teacher/choreographer taking it in mere feet away, rendered in an alluring silhouette. Balanchine’s outline in this clip looks like a cutout waiting to be filled in by the testimonials from his former dancers. These include Merrill Ashley, Jacques D’Amboise (who died earlier this year), Gloria Govrin, Suki Schorer, Heather Watts and Edward Villella, all of whom we also see in the studio with today’s young hopefuls and principals.

Everyone interviewed agrees the demanding precision, physicality, repetition and brusqueness (“Who taught you?”) in his classes turned off many; only a percentage of the company ever attended them. But to come out on the other side was to discover who one was as a dancer. And waiting there was Balanchine — ready to showcase them and willing to tailor his choreography to a dancer’s strengths (Villella’s jumping, Govrin’s height) — because he believed all along.

While audiences marveled at the speed, athleticism, rhythm and positions that made “Apollo,” “Firebird,” “Serenade” and “Agon” famous works of choreography, what they were really witnessing was the splendor of meaningful training — dancers whose relentless instruction was so internalized, it liberated them onstage to embody the art.

The biographical information is spare, deployed only for context through which the interviewees can reveal what Balanchine was like hands-on, what was important to him and how it changed them. The intimacy, warmth and humor of the memories give the footage of him teaching the feeling of watching home movies from the adoring offspring of a cherished father.

That respect for the gift of his training, though, also imbues the documentary with a melancholy at one point when these keepers of his flame admit to the difficulty of continuing that legacy, admitting something is invariably lost. Colored by the individuality of each person’s experience with Balanchine, the humility of recognizing their own failings as satellites without the same level of communication intensity and the simple passing of time, the way these veteran disciples talk about the totality of his significance is invariably bittersweet. “None of us got everything,” is how Merrill Ashley poignantly puts it.

Toward the end of the very fine, heartfelt “In Balanchine’s Classroom,” Hochman returns to that same grainy rehearsal footage of Balanchine in shadow, watching his dancers. But now it’s as if his silhouetted form on that stage is something more wistful, a ballet spirit waiting to be tapped by the next generation.

Denial of responsibility! TechiLive.in is an automatic aggregator around the global media. All the content are available free on Internet. We have just arranged it in one platform for educational purpose only. In each content, the hyperlink to the primary source is specified. All trademarks belong to their rightful owners, all materials to their authors. If you are the owner of the content and do not want us to publish your materials on our website, please contact us by email – [email protected]. The content will be deleted within 24 hours.
BalanchinesClassroomDanceentertainment newsEntertainment updateLiveMastersnews update
Share

Participate in the first course that Microsoft and Facebook offer to help MSMEs. It’s free!