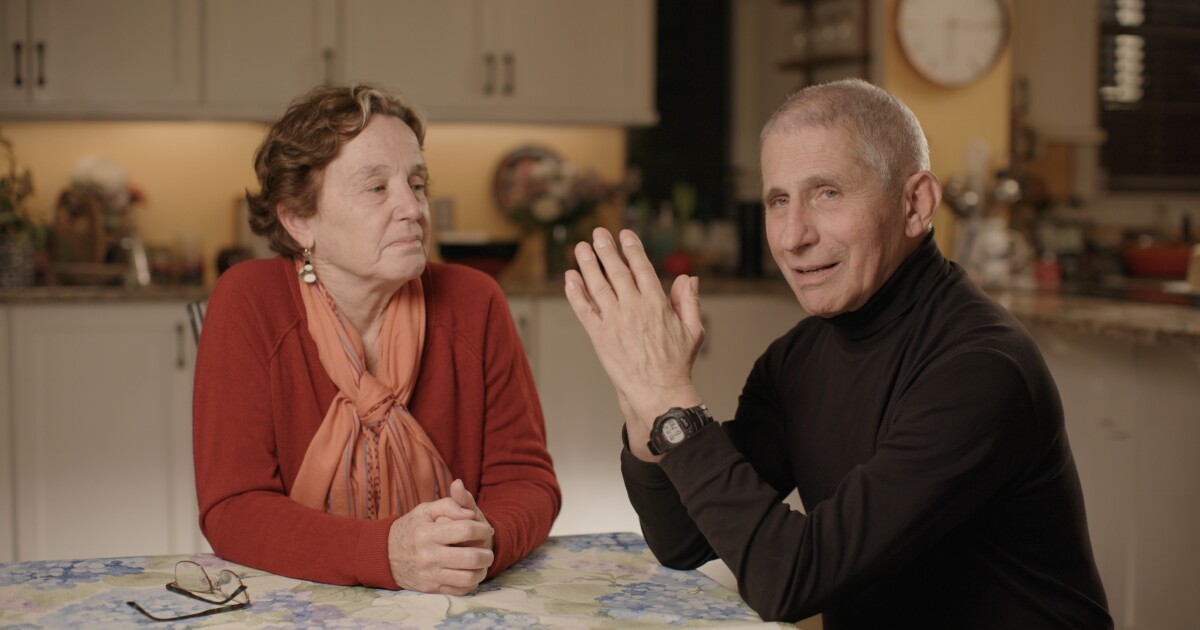 Review: ‘Fauci’ illuminates even as it flatters ‘America’s doctor’

Bobble heads, anti-science rhetoric and votive candles are certainly one type of prism through which to look at the love/hate arc that is Dr. Anthony Fauci’s stint as the public face of the government’s handling of the COVID-19 pandemic. The documentary portrait “Fauci,” however, from filmmakers John Hoffman and Janet Tobias, would prefer you to view this dedicated public servant’s life as something greater than one plague’s worth of fear, hero worship and crazy vitriol.

But that’s not because his long career at the National Institute of Allergy and Infectious Diseases, which Fauci has overseen since 1984, was some unremarkable stretch. His career there tracking outbreaks started as AIDS was going from a few cases to a crisis, and if you knew his name before last year, then you’ll know how vilified he was then, when activists were united against his stewardship of the clinical studies seeking a life-saving treatment. Needing a security detail because of death threats may be a newer, worrisome pitfall, but being targeted for criticism isn’t new to him.

Is “Fauci” strategically timed, then, to counter how insanely twisted the right-wing animosity for “America’s Doctor” has gotten? Of course, and that’s as good a reason for the film to exist as any, even if the movie — while acknowledging legitimate gripes against him — is occasionally as machine-stamped for adulatory portraiture as a commercial bio doc can be. Daniel Hart’s adrenalized score, for instance, marked by solo trumpet blasts, sounds like it was pulled from a heroic race-against-time thriller.

But where the filmmakers’ approach sets itself apart in these days of image-massaged biographies is in juxtaposing the bookending health catastrophes of Fauci’s career as an especially illuminating lens through which to examine his drive, decisions and personality. (And if you’re wondering whether Fauci had some control over or financial stake in the film, the promotional materials make a point of saying he didn’t and doesn’t.)

It’s no surprise that the Brooklyn-born, Cornell-educated immunologist is an engagingly blunt chronicler of his own background, and one can imagine that doing so for admiring documentarians is temperamentally easier than fighting to squeeze facts into (and swat away untruths from) those bizarre, muddled, Trump-led pandemic task force news conferences. Scenes inside his office at the National Institutes of Health or at home with wife Christine Grady, a nurse-bioethicist, are sparse. But you get some idea of the toll that the last 18 months battling egos, misinformation and politicization has taken on his outlook for the effectiveness of communication to shepherd the populace through a pandemic, when the country is so divided.

In the ’80s, when fighting HIV/AIDS was scientific, regrettably cultural, yet rightly political, Fauci was not only leading the charge for a cure but also pushing back on television against anti-gay prejudice and fear, and realizing he needed to bridge the divide with ACT UP protesters angry at the NIH for the slow pace of treatments. This sequence is “Fauci” the movie and the subject at its most compelling. Using great archival footage and interviews with those activists, we see how his ability to talk truth to people, and listen to their concerns, led not only to consequential change in clinical trials but also lasting friendships with once fierce critics, many he would count on for support this last year.

Fauci and Christine’s daughter Jenny (one of three children, shown Zooming with her parents at one point) helps fill out the picture of a father whose ethic and compassion continues to inspire — he still cries at the memory of dying AIDS patients in his care and the frustration he felt for so many years in the darkness of trying to solve it. Now, it’s a surreal world of death threats and, in one captured scene, debating whether he needs a Twitter handle. When Ebola was contained, Fauci made a point to embrace a recovered patient for the cameras, just to assuage fears. “Fauci” is a hug too, but maybe it’s also, for this tireless public servant, in this moment, what the job needs.

Rated: PG-13 for thematic material, some strong language, and some suggestive material.

Denial of responsibility! TechiLive.in is an automatic aggregator around the global media. All the content are available free on Internet. We have just arranged it in one platform for educational purpose only. In each content, the hyperlink to the primary source is specified. All trademarks belong to their rightful owners, all materials to their authors. If you are the owner of the content and do not want us to publish your materials on our website, please contact us by email – [email protected]. The content will be deleted within 24 hours.
Loading...
AmericasDoctorentertainment newsEntertainment updateFauciflattersilluminatesnews update
Share

Why Is Employee Engagement Crucial For An Organization’s Success?