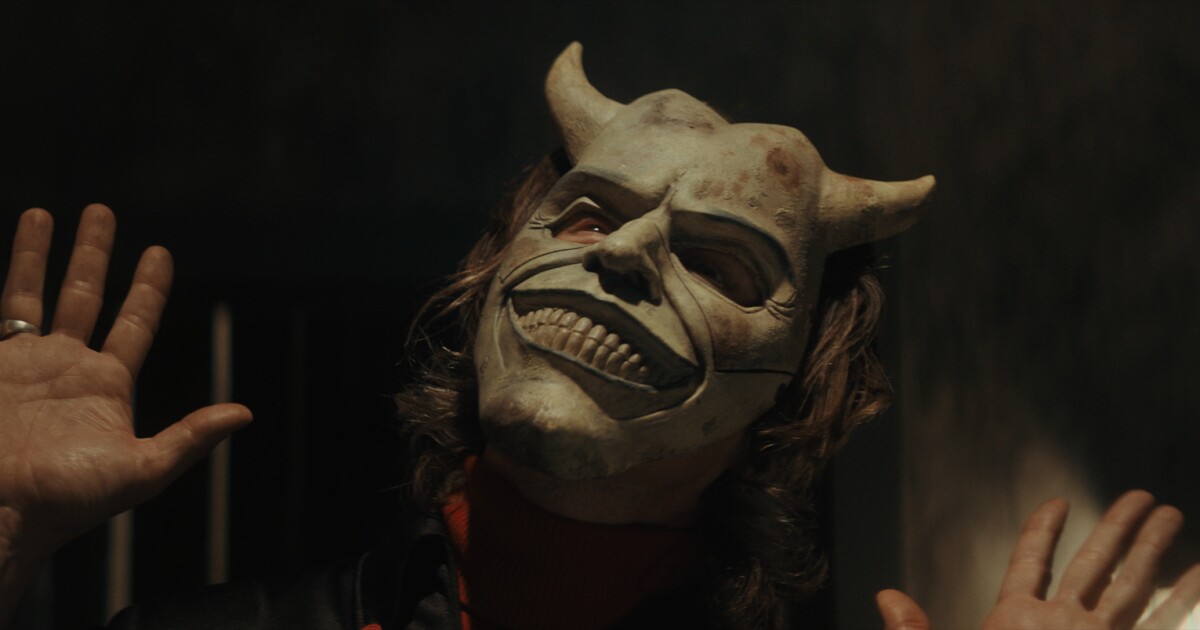 Review: If ‘The Black Phone’ rings, you’re already in trouble

There’s been a flood of throwback tween terror on movie screens and streaming services for the past few years: From “Stranger Things” to the newer “It” iterations, it’s been a banner era for floppy-haired pubescents in ringer tees. Scott Derrickson’s “The Black Phone” fits neatly into this subgenre, but this incredibly dark kiddie kidnap horror film hits different with a hard-R rating. It goes for the jugular with a surprising extremity of violence, plus a tone that wobbles between the bleak and the buffoonish.

Adapted from a short story by Joe Hill (the son of Stephen King), “The Black Phone” sees “Doctor Strange” director Derrickson reunite with his “Sinister” co-writer, C. Robert Cargill, and star Ethan Hawke, under the Blumhouse production banner, known for its low-budget, high-return horror flicks. “Sinister” co-star (and “It: Chapter Two” star) James Ransone also joins the gang for a film that’s nostalgic not just in setting but with regard to our fears as well. Perhaps it’s trying to show the dark side of nostalgia: It wasn’t all classic rock tunes and absentee parenting back in the ’70s — there were also real threats, not just supernatural ones.

Mason Thames stars as Finney Blake, a kid just trying to make it through middle school in 1978 Denver. His dad (Jeremy Davies) is a drunk, and the bullies are brutal (the beatdowns onscreen are astonishingly bloody). Plus, all of his friends keep disappearing at the hands of a kidnapper known as “the Grabber,” who leaves black balloons at the scene of his crimes. It’s only a matter of time before the vulnerable loner Finney gets snatched too, and considering neighborhood stud Bruce (Tristan Pravong) and tough kid Robin (Miguel Cazarez Mora) didn’t escape the Grabber, Finney figures he’s a goner.

Much of “The Black Phone” takes place in the drab basement where Finney is kept by the terrifyingly masked Grabber (Hawke), who occasionally shows up to thoroughly creep him out and make vaguely menacing threats. On the wall is a black rotary phone with a cut cord, but it keeps ringing, and Finney keeps answering. Through the static, voices come through, and Finney realizes they are the voices of the boys who have disappeared before him. They coach him through this experience, giving him tips and tricks and guidance to survive the Grabber’s clutches — if not for him, for them.

Thames delivers a searingly authentic performance as the young Finney, and when he’s all alone in the basement with ghosts, “The Black Phone” is at its best: suspenseful, emotional and filled with jump scares. Aboveground, things are a bit shakier, the characters more two-dimensional, the performances much, much bigger. Davies plays the drunk, abusive dad to the hilt, and Madeleine McGraw is a bit over-the-top as Finney’s overly precocious, potty-mouthed psychic sister, Gwen. Ransone, as a coke-addled armchair detective, brings a level of humor at odds with Finney’s rather heroic journey in the basement.

Desaturated color and grainy, dreamlike sections bring a vintage feel to the film’s style, and even the fear of a child kidnapper feels appropriately retro. The period setting doesn’t seem to be trying to comment on current events — it’s almost as if the film is nostalgic for simpler times when the greatest worry for a child was a creepy guy with a van and a soundproofed basement rather than the larger existential threats of climate change and mass shootings. At least it seems like there’s a way out of the Grabber’s clutches, and the larger message of “The Black Phone” is in that perseverance, standing up to the biggest bully of them all. It’s a positively quaint moral at the center of a shockingly violent and scary movie.

Rating: R for violence, bloody images, language and some drug use.

Denial of responsibility! TechiLive.in is an automatic aggregator around the global media. All the content are available free on Internet. We have just arranged it in one platform for educational purpose only. In each content, the hyperlink to the primary source is specified. All trademarks belong to their rightful owners, all materials to their authors. If you are the owner of the content and do not want us to publish your materials on our website, please contact us by email – [email protected]. The content will be deleted within 24 hours.
blackentertainment newsEntertainment updatenews updatePhonereviewRingstechi live
Share