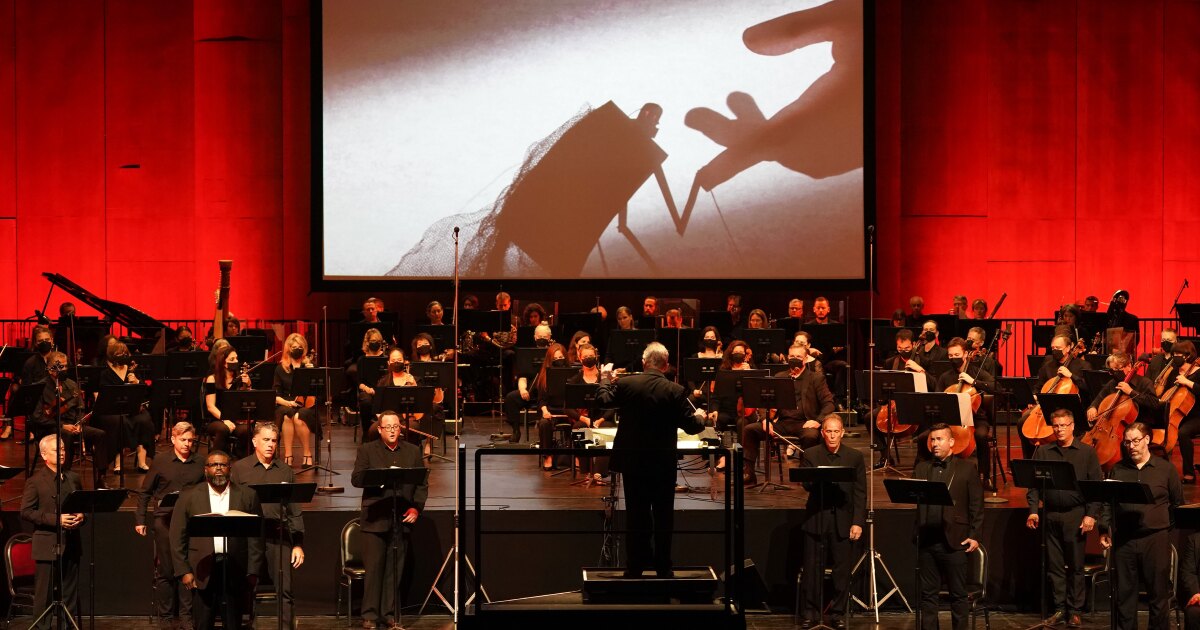 Review: L.A. Opera is first in the U.S. to return to its home stage. Emotions flow

The Music Center opened its doors to the public Sunday afternoon for the first time in nearly 15 months. Nothing much has changed inside the center’s Dorothy Chandler Pavilion. Whatever cobwebs might have flourished have been swept away. The lobby’s busts of a brooding Beethoven and beloved cellist Gregor Piatigorsky appeared to have been carrying on their otherworldly dialogue unconcerned by pandemic.

It was us, the music-deprived audience of Los Angeles Opera, who had changed. We came masked. Our identity still partially in question.

Those seated in the orchestra section sported black wristbands signifying proof of COVID-19 vaccination. The nonvaccinated were in balconies, where evidence of a negative COVID-19 test was required. Capacity was limited to 25% and seats were assigned, and the Music Center clearly meant it. There were no lobby concessions. Celebratory Champagne is so 2019.

This was, we were told, the first time since the pandemic shutdown that an American opera company was performing for an audience inside its opera house. L.A. Opera had no intention of letting anyone off the pandemic hook. It chose Stravinsky’s plague-infested opera-oratorio, “Oedipus Rex,” which harps on the futility of it all. It was performed though not staged — that is, presented as a stony oratorio, with video animations on screens as illustration.

L.A. Opera Music Director James Conlon stood on an imposing podium with a sweeping view. Rows of soloists and a male chorus kept the requisite six feet apart. Far upstage, members of an orchestra, also safely spread out, sat on a raised platform. Conlon joked to the audience that he always had wanted to conduct an ensemble of soloists, chorus and orchestra on a space the size of a football field.

It felt weird. It felt, in certain essential ways, wonderful. But there was no escaping that this remains a conflicted period in the pandemic, where we are neither here nor there. We’re back, but as yet we don’t how back or back to what. With “Oedipus Rex,” a not happy, not hopeful work, overt visceral thrills competed with demanding, thoughtful pause.

The singing was tremendous. Stunning soloists — Russell Thomas, J’Nai Bridges and Morris Robinson — dominated. These three L.A. Opera regulars have had a significant presence in the company’s programing that contends with diversity in opera and social justice throughout the last year. Thomas is L.A. Opera’s welcome choice for artist-in-residence.

Stravinsky did not intend to display diversity. He asked that characters in “Oedipus,” whether staged or not, be masked (they weren’t) and treated as living statues, their movement restricted to head and arms. Free will and expression come from the composer and the composer alone. Jean Cocteau’s libretto was less concerned with solving a murder mystery than underscoring the fated tragedy of Oedipus not knowing who he was.

That, of course, has a timelessness all its own. Stravinsky wanted the French libretto translated into Latin (however poorly) to make it all the more formalistic and antique. The drama becomes the age-old embodiment of human beings caught in a trap. King Oedipus sets out to save Thebes from a plague with blind ambition that leads to the most pathetic fall from power and grace imaginable — unknowingly marrying his mother, killing his father and figuring he has no further option than bloodily poking out his eyes.

There is further striking context to this “Oedipus Rex,” whether or not intentional on L.A. Opera’s part. Esa-Pekka Salonen’s first concert with the L.A. Phil after being named music director was a staging of Stravinsky’s work in the Chandler in collaboration with Center Theater Group (those were the days). In 1997, Salonen conducted “Oedipus” again in the hall, this time on the same program in which he led the premiere of his own groundbreaking “LA Variations.”

A memorable Peter Sellars staging of Stravinsky’s “Oedipus” in Walt Disney Concert Hall, with a revelatory set of African sculptures, began Salonen’s historic final concert as music director of the L.A. Phil in 2009. The men’s chorus (Stravinsky calls for only tenors and basses) consisted of singers from the Los Angeles Master Chorale, and several choristers in the brilliantly articulate chorus Sunday were in that performance.

We are, for whatever reason, having a Cocteau moment. Two weeks ago, Long Beach Opera made its pandemic comeback with a parking lot production of the last opera in Philip Glass’ Cocteau trilogy, “Les Enfants Terribles.” This too is an example of the multidisciplinary French writer’s “infernal machines” of fortune and doom that populate his plays and overrun our sense of purpose. As we attempt to find ourselves and reimagine our post-pandemic world, Cocteau might well serve as one guide.

Even the puppet animation created by Manual Cinema and shown on screens around the stage further suggested a kind of Cocteau-esque macabre stylized elegance. These, I suspect, will prove more effective when L.A. Opera streams a video version of the performance June 17.

What we got in the theater was, instead, a feast of the raw, powerful, emotional singing that opera lovers hunger for a little more than a neoclassical Stravinsky did. He wanted a lyric tenor as vulnerable, clueless Oedipus. Thomas proved the compelling opposite, magnificent in his authority and surety, a study in the vanity of conceit. On the other hand, Bridges’ nuanced, somewhat less regal Jocasta was sensual and, toward Oedipus, disquietingly maternal. Robinson’s bass boomed the shocking prophecy of Tiresias, the voice of fate who kept all — among them Creon (sung by John Relyea, who was also the messenger) and the shepherd (Robert Stahley) — under his vocal thumb.

By contrast, Stephen Fry’s narration on video was charming and disarming. The mixed messages made their own sense.

Conlon’s grand conception was to capture all this by matching power with power. The raised orchestra allowed for more bass than we usually get in the Chandler and increased prominence of the winds, which served Stravinsky well. Brass you can hear from almost anywhere. But distance is distance. Football fields and opera don’t normally mix.

Then again, nothing is normal. It has taken well over a year for opera in America to finally come in from the cold.

Loading...
Denial of responsibility! TechiLive.in is an automatic aggregator around the global media. All the content are available free on Internet. We have just arranged it in one platform for educational purpose only. In each content, the hyperlink to the primary source is specified. All trademarks belong to their rightful owners, all materials to their authors. If you are the owner of the content and do not want us to publish your materials on our website, please contact us by email – [email protected]. The content will be deleted within 24 hours.
emotionsentertainment newsEntertainment updateFlowhomenews updateOperareturn
0
Share

Assam Congress for cancellation of class 10th and 12th exams