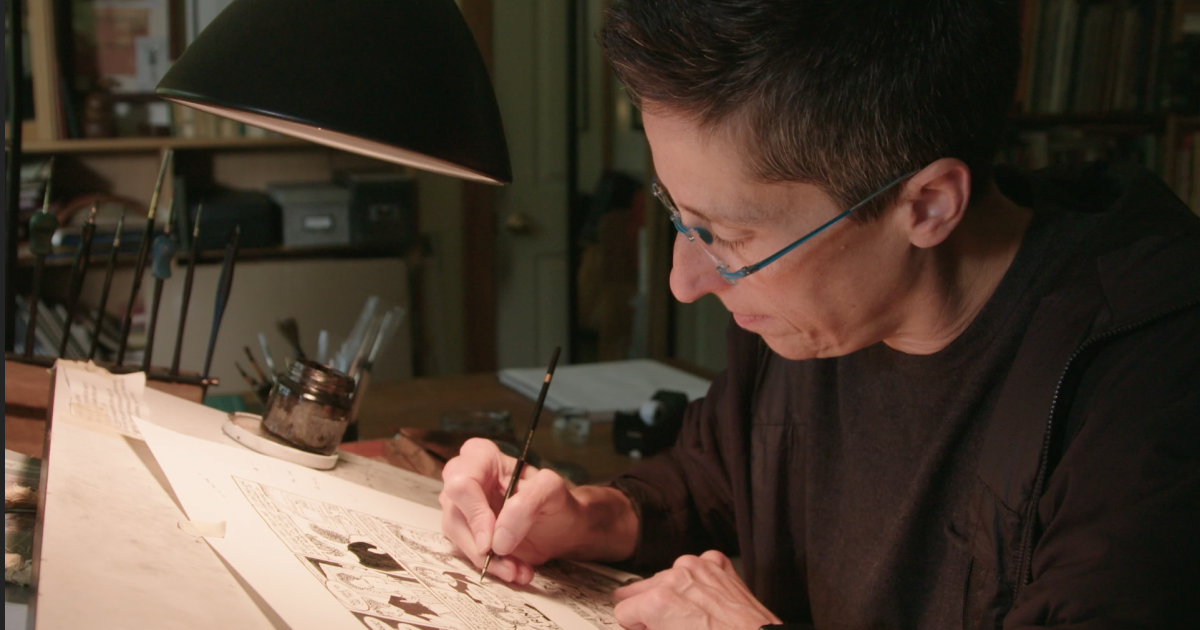 Review: ‘No Straight Lines’ is a timely celebration of the history of queer comics

Despite what certain blockbuster franchises would have you believe, there is more to comic books than the mainstream superheroes that jump to various screens. So it’s well past time for the heroic pioneers of queer comics to get time in the spotlight.

Directed by Vivian Kleiman, “No Straight Lines: The Rise of Queer Comics” is a celebration of the history of comics by and about LGBTQ people. The documentary profiles five pioneers of queer comics, painting a picture of resilience and community as they carved out a space to tell their own stories.

More of a broad overview than an exhaustive history, “No Straight Lines” is nevertheless an enjoyable and informative look at the careers of Alison Bechdel, Howard Cruse, Mary Wings, Rupert Kinnard and Jennifer Camper and their influence on queer comics and the queer comics community.

Interviews with these cartoonists broken into vignettes make up the bulk of the documentary, which also creatively showcases their work to help illustrate different moments and topics of conversation. But it’s when the documentary offers glimpses of context into the broader history of the queer community that it is also quietly powerful.

Bechdel — the namesake of a popular female representation test and the author of the critically acclaimed graphic memoir “Fun Home,” which was adapted into a Tony Award-winning musical — is likely the most well-known of the subjects, but “No Straight Lines” makes it clear that they are all trailblazers. These are all creators that realized that they could make comics that reflect their own identities and experiences, and that these stories were needed, at a time where there really wasn’t any LGBTQ representation in any mainstream media.

The film is also a lovely tribute to Cruse, an Eisner Award winner and the founding editor of “Gay Comix” who died in 2019. Cruse helped make a space for queer comics to publish stories about queer people, leading by example at a time where it was professionally risky to be out. The frequency with which Cruse is warmly mentioned in anecdotes by the other subjects makes his influence, and the closeness of the early queer comics community, abundantly clear.

One of the underlying takeaways of “No Straight Lines” is that the history of queer comics is a history of resilience and being true to who you are. When the Comics Code Authority was established in the ‘50s, banning all mention of LGBTQ people and subject matter, queer comics creators moved underground where they could tell their stories on their own terms.

It was within the pages of these comics that queer cartoonists could partake in the revolutionary act of representing a world where LGBTQ people exist, as well as respond to the Stonewall riots and the AIDS epidemic and other issues affecting the community. And that’s just one way queer comics have had to adapt over the years, as the rise and fall of alternative newspapers, independent booksellers and the internet affected the comics landscape.

“No Straight Lines” is also a reminder that the history of LGBTQ comics is relatively brief. Besides Cruse, these queer comics pioneers are still active (Bechdel’s latest book was published in May). But as the ongoing movement to ban books, including LGBTQ graphic novels that exist because these pioneers helped pave the way, from school libraries continues in states like Texas, it’s a history worth fighting for.

‘No Straight Lines: The Rise of Queer Comics’

Denial of responsibility! TechiLive.in is an automatic aggregator around the global media. All the content are available free on Internet. We have just arranged it in one platform for educational purpose only. In each content, the hyperlink to the primary source is specified. All trademarks belong to their rightful owners, all materials to their authors. If you are the owner of the content and do not want us to publish your materials on our website, please contact us by email – [email protected]. The content will be deleted within 24 hours.
Celebrationcomicsentertainment newsEntertainment updatehistoryLinesnews updateQueer
Share

Hyderabadi Chicken Fry And Warqi Paratha: A Delicious Meal From The City Of Nizams