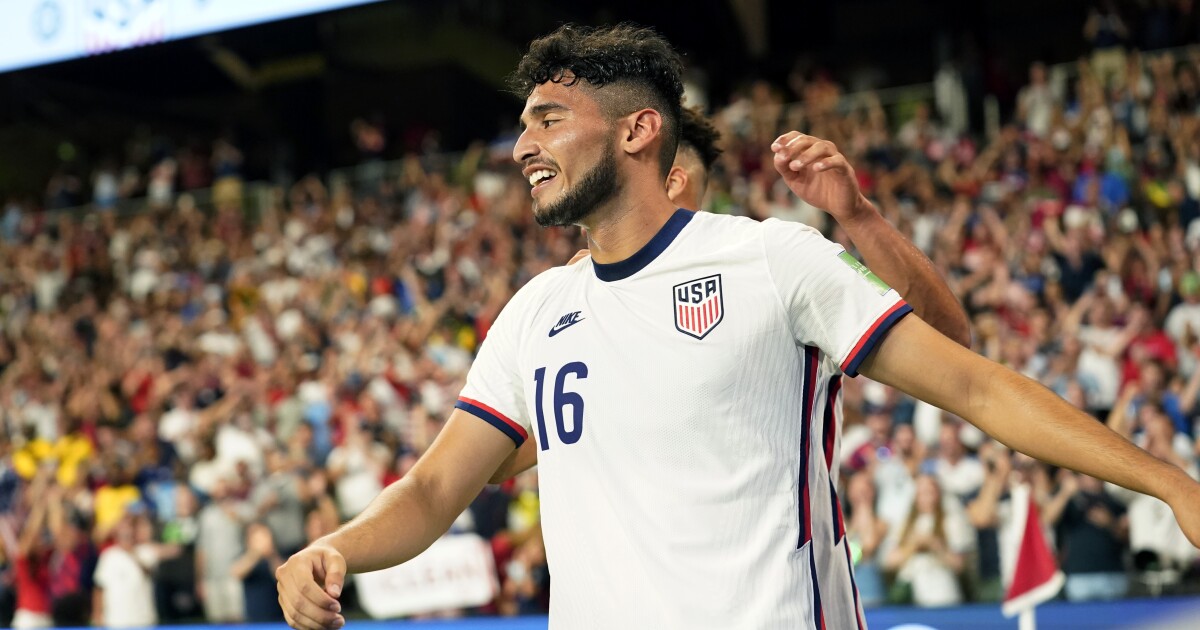 In mid-August, when U.S. coach Gregg Berhalter began putting together his roster for World Cup qualifying, Ricardo Pepi wasn’t on it.

The Texas teenager, a dual national, didn’t formally announce his intention to play for the U.S. over Mexico until just before the first game. When he did, Berhalter quickly gave him a jersey and that has proved to be a good decision. Less than two months later, Pepi leads the tournament in scoring for an American team that’s unbeaten after four games, the latest victory coming Thursday when Pepi scored two second-half goals in a 2-0 win over Jamaica.

“We’re on the train. We’re just observing everything that’s happening,” Berhalter said. “It’s amazing. An 18-year-old gets an opportunity and takes advantage.”

For Pepi, becoming an overnight sensation has been a long time coming, beginning when he began playing organized soccer in El Paso at age 4.

“I feel like I’ve worked just to be able to be on the squad. And when I made my decision, I was going to give my all to the team,” he said. “I don’t know if it’s too fast or if it’s slow.

It’s coming at just the right time for a team without its top two scoring threats, Christian Pulisic and Gio Reyna, who are injured. But Pepi, making his second start for the U.S., made sure the team missed neither, becoming the youngest player to score in consecutive qualifiers for the U.S. and the second youngest to score multiple goals in a game, behind only Pulisic.

The U.S. didn’t lack for possession in the first half, but it did lack precision, controlling the ball for nearly 30 of the 45 minutes yet failing to put a shot on target and misfiring on all 11 crosses, failing to score in the first half for a seventh straight game.

That hasn’t happened in at least three decades — or more than a dozen years before Pepi was born.

Playing in front of a sellout crowd of 20,500 that included many family members, Pepi needed just four minutes to open the scoring in the second half, heading home Sergiño Dest’s right-footed chip from the right edge of the box for his second goal in as many qualifiers.

Another 18-year-old, midfielder Yunus Musah, set up the score with a long, driving run up the center of the field, which put the Jamaicans in retreat and allowed Dest to find space on the right wing. Musah, who had an inconclusive COVID-19 test earlier in the week, wasn’t cleared to play until less than 24 hours before kickoff.

Pepi doubled the lead in the 62nd minute, one-touching in a low feed from Brenden Aaronson on the left wing.

“He has this instinct … an instinct to score,” Berhalter said. “It’s really hard to teach that to players.”

With the win, the U.S. (2-0-2) moved past Mexico to the top of the standings on goal differential. The top three teams in the eight-team tournament qualify for next year’s World Cup in Qatar.

And the U.S. figures to get only better because 21 players have made their qualifying debuts in the last month. The lineup Berhalter started Thursday, which included two teenagers and two 20-year-olds, was the second youngest in a qualifier — behind the one he used in the previous game.

“I don’t even think we think of ourselves as young guys anymore,” said Aaronson, 20. “We’re put in a situation where the whole country is looking at us and we need to perform.”

Still, Berhalter was preaching caution with games against Panama and Costa Rica coming up in the next six days.

“Everything was pretty good about this game,” he said. “The trap is going to be us thinking we were great, thinking we’ve qualified for the World Cup. If we do that, we’ll get our ass kicked in Panama on Sunday.

He could always take the train.

Denial of responsibility! TechiLive.in is an automatic aggregator around the global media. All the content are available free on Internet. We have just arranged it in one platform for educational purpose only. In each content, the hyperlink to the primary source is specified. All trademarks belong to their rightful owners, all materials to their authors. If you are the owner of the content and do not want us to publish your materials on our website, please contact us by email – [email protected]. The content will be deleted within 24 hours.
CupgoalsJamaicaliftmatchnews updatePepisqualifying
Share