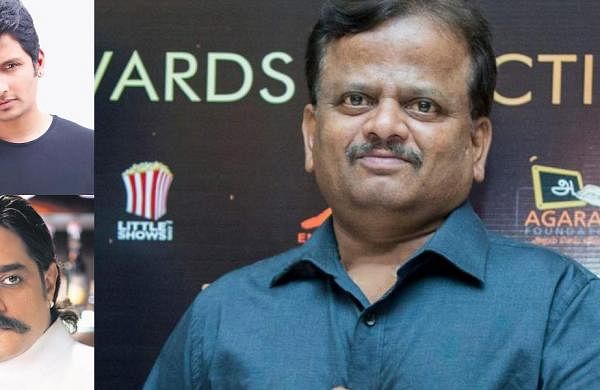 KV Anand, who turned director with 2005’s Kana Kandaen, did a total of seven films over a span of 15 years. The films, that always showed a love for the big ‘twist’ and were built on a labyrinthine plot structure, were often noted for their commentary on socio-political issues, and crimes such as smuggling, terrorism, bio-war, and even the dark side of media.

Here are stars and associates who worked under his direction, speak about what made him such a special filmmaker:

Kabilan Vairamuthu (Co-writer of Kavan, and lyricist in Anegan, Kavan and Kaappaan)

He would never do a film for the sake of doing it. He believed in fine-tuning a script to the maximum and only then, would he think about casting the lead. I can confidently tell you that he has never done a film to work with a hero. In his world, the story is the hero. Then, he would work on the research, characterisation and engineering required for the script.

Only then would he entertain thoughts on the actors who would fit the universe. He was a rare director who appreciated the significance of writing, and valued writers. Young filmmakers have a lot to learn from how he presented a film. He knew the difference between a story and a screenplay, and would spend so much time on the latter. He always came up with novel ways to communicate what he wanted.

For instance, a TV playing something in the background wouldn’t just be a prop; it would communicate something useful. He used properties and lighting to pull off such results. Over the last year, we, along with Pratibha Nandakumar, were finishing work on a script. He was in the last leg of talks with producers, and we were planning on shooting this script from June or July.

The film is a love story set in the backdrop of electoral politics. The film would have joined the lines of Kavan and Ko as one that looked to spread awareness about social issues. He was confident about the script and we were even joking about how we could get in trouble with the censor board over certain scenes.

He is a hardworking genius. It was surprising how he was able to be both intelligent and dedicated at work. It is a rare quality for someone in cinema. His demise is an irreplaceable loss, not only to his friends and family but to the entire industry.

When I shot for Kavan, I had just begun exploring the craft of acting, and working with KV Anand sir was an enriching learning experience. A day after we shot an emotional sequence, he came to me and shared that he had tears in his eyes while watching my scene in the edit suite.

Despite our limited interaction, I learned a lot. He called me after watching C U Soon and was curious to know how we pulled off the film during the lockdown. Sadly, that was the last time I spoke to him. His demise is a huge loss.

My experiences with him are very many. We have done so many films. He had said many times that he had learnt so much from me, and vice-versa. We shared a unique bond and would often share film recommendations. He was one of the best technicians I have worked with.

Though he was a cinematographer himself, he always let his assistants shoot the films he directed. He always supported his assistants who branched out from working with him. He challenged my ability by giving me the maximum rushes and angles for films we worked on. He was like a big brother to me. Everything that has happened to me professionally and personally… he was around.

One of my greatest experiences was working with him. I had actually grown up watching his films as a cinematographer, like Khakee. I never imagined I would, one day, work with him. When he offered me Ko, I stepped in at a time when the pre-production was on the verge of completion.

He told me he had enjoyed my work in films like E, Kattradhu Thamizh and Siva Manasula Sakthi. I was to work with him on Ayan, but it was a big-budget film and Kattradhu Thamizh had not done well financially. But I was still happy that he approached me first.

When he narrated Ko to me, I remember telling him that even if I did not go ahead and do the film, it was one of the best scripts I had heard. On the sets, when we used additional cameras, he would often take over one of them. He was an artist who showed tremendous knowledge over all departments of filmmaking. As he got the best out of me in Ko, I was eager to work with him again.

Till Ko, I was playing happy-go-lucky roles like in E, romcoms like SMS or dark scripts like Kattradhu Thamizh. It was KV Anand sir who gave me my first truly big commercial success in my career. The film gave me the opportunity of travelling across Tamil Nadu with him and it expanded my exposure.

I remember that each day on the sets of Ko, we were confident that we were doing a successful film. He never let himself be bogged down by circumstances. For instance, he would go ahead and shoot a fire sequence, even when it was raining.

After seeing the first copy of Ko, he thanked me and all the technicians. In the ‘Ennamo Aedho’ track, he noticed that the lipsync was off in the rap portions. He had such an eye for detail, and was a perfectionist.

He should have stayed back and done so many more films with youngsters, who would have benefitted from learning the craft of filmmaking and his work culture. I can’t believe news of his demise.

Before becoming a successful director in Tamil cinema, KV Anand had already made a name for himself as an ace cinematographer across South cinema, having won a National Award for his very first film, Thenmavin Kombath. Here are artists speaking about his excellence as a cinematographer:

KV Anand was instrumental in introducing several cutting-edge camera techniques. He experimented with a technique called reverse film processing for the first time in Asian cinema in Mudhalvan’s Shakalaka Baby song, and achieved a certain kaleidoscopic tone and thawed colours.

In order to achieve that psychedelic effect, he got a Kodak Ektachrome 100 camera. Anand used the speed ramping technique, otherwise called the time remapping approach, to create the illusion of time getting accelerated at specific points to heighten the dramatic effort.

While convention dictated that the concerned ‘shot’ is filmed in 24 fps routinely, and 4 fps (for slow motion) or 48 fps (high frame rate), Anand, again for the first time in Asian cinema, wanted to try a real-time version of this “time-ramping” in the same song.

This would mean that for a 10-second shot that requires time-based orchestration, the capture frame rate is adjusted from 60 fs to 24 fps in a single shot, which when played back at the standard movie rate of 24 fps results in a unique time-manipulation effect.

Achieving something like this, with such precision and quality, at a time when advanced video-editing software like AVID wasn’t readily available, speaks a lot about his thirst for learning and implementing the most recent technologies.

KV Anand flew to the US in the early 2000s and attended a two-week hands-on training workshop on the then new Super 35 mm single-sensor electronic camera. After testing it in a few portions of The Legend of Bhagat Singh and Khakee, he used it as the predominant format for shooting the whole of the ‘Vaaji Vaaji’ song in Rajinikanth’s Sivaji: The Boss.

The format made space for improved ISO, state-of-the-art sensors, unparalleled clarity, the ability to shift tones within a long shot, and almost AI-like autofocus. He was also the first Indian cinematographer to use the Digital Intermediate (DI) technique and bypass the routine path for digital colour grading.

After getting thrice the number of technicians for colour grading and getting the colourists trained, he made sure Sivaji’s final output was in 4K DI format, which quite conspicuously enhanced the image quality, gave it that much-celebrated glossy touch, and greater flexibility within the spectrum of colour grading.

I’m feeling extremely sad at hearing this news. He was a thorough gentleman, always shy and soft-spoken. But he was extremely good at his work. I remember (for Josh) we were shooting in a lot of sun. So, he would wet the floor or the sand in order to make his frames sharper and glossier.

Shooting under the top sun isn’t ideal but we had no choice. The film was shot over three years, and he was a constant companion throughout the film. I’m shocked to hear about his death. I’m sure all the industries he worked in felt deeply connected to him.

KV Anand had a very different, and definite commercial voice. There is something about the way he brings the light in, which was unique in those days.

His use of light was sensual. It was unlike anyone else. And he had a good sense of colour. He was influential, and we spoke a few times. He was someone who also got to experience the reality of life before he became a cinematographer.

He was very hardworking. I found his work to be intriguing and had asked him to do the cinematography for Kadhal Desam. Even during the 90s, it was impossible to shoot in Mount Road. So, he used to get the shot ready early in the morning to capture crowded locations.

‘Mustafa Mustafa’ is relevant even today because of his visuals. Be it rain or shine, he was always ready with his camera. A few months ago, I had approached him to work on Gentleman 2. He said he was busy with his directorial commitments and would definitely take it up if he found time in between.

With cinematographer-turned-director KV Anand breathing his last yesterday, we speak with prominent artists who worked with and were inspired by him.

Loading...
Denial of responsibility! TechiLive.in is an automatic aggregator around the global media. All the content are available free on Internet. We have just arranged it in one platform for educational purpose only. In each content, the hyperlink to the primary source is specified. All trademarks belong to their rightful owners, all materials to their authors. If you are the owner of the content and do not want us to publish your materials on our website, please contact us by email – [email protected]. The content will be deleted within 24 hours.
AccoladesforanaceAnandartistChandrachur Singhentertainment newsEntertainment updateJiiva
0
Share