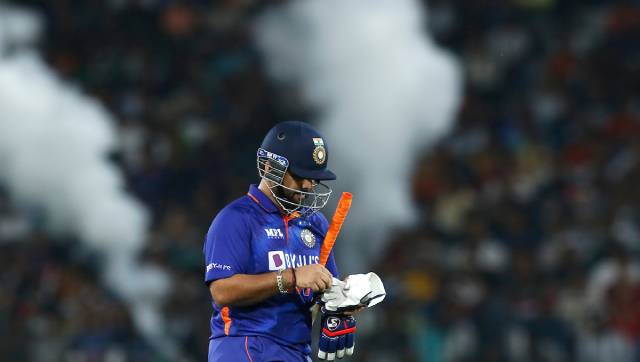 Rishabh Pant gets better but has a long way to go as captain – Firstcricket News, Firstpost

Around twenty days back, the Indian selectors had announced the squad for the South Africa T20Is and as anticipated the mainstays, Rohit Sharma, Virat Kohli and Jasprit Bumrah were rested and captaincy was handed to KL Rahul with Rishabh Pant being named as his deputy. But just a day before the first clash, Rahul was ruled out of the series due to a groin injury.

KL’s exclusion meant some major changes and one of them was the responsibility of leading the side that eventually came to Pant with Hardik Pandya being named as the vice-captain. The Indian team was all set be led by a wicket-keeper batter again.

Captaining an Indian side is a high-pressure job and Pant was about to taste the same in a few game’s time. It wasn’t the first time he was asked to lead a side as he had led his state Delhi in domestic competitions and IPL team Delhi Capitals in the past.

In the five-match T20I series, the Pant of the old was not on show with the bat as returns weren’t encouraging throughout the series. Has the burden of captaincy bogged him down? Delhi Capitals’ Head of Talent Search Saba Karim feels otherwise.

“Being the captain can’t be an overburden. Leading the side is an honour and one should feel proud that he has been asked to lead the side,” Saba told Firstpost.com in a select media interaction facilitated by Sony Sports Network.

The former India cricketer further added that the left-handed batter has got a lot to achieve in white-ball cricket.

“This is the great opportunity for Rishabh Pant to prove himself not only as a player but also a captain.”

“Having said that I do believe that there is so much more for Rishabh Pant to achieve in white-ball cricket. There is immense potential in him but he is yet to fully utilise that kind of talent and potential,” he added.

Pant, given the talent he has, is definitely an underachiever in the T20Is as he has managed 741 runs at an average of just over 23 from the 48 matches he has played.

The outside off plan

Pant the batter failed to leave a mark in the drawn series vs South Africa and credit for the same must also go to the visitors who who persisted with the outside off line against him and didn’t allow him to explore scoring options on the on side.

Former India captain Sunil Gavaskar felt Pant has to stop looking for the aerial option against deliveries outside off as the left-hander “can’t throw enough muscle on that”.

“He hasn’t learned. He hasn’t learned from his previous three dismissals. They throw wide, and he keeps going for it. He can’t throw enough muscle on that. He has got to stop looking to go aerial that far outside the off-stump,” spoke Gavaskar during his commentary on Star Sports.

A young Rishabh Pant had led Delhi to the final of Ranji Trophy 2017-18 season. The side eventually ended as the runners-up but he was later removed as the captain for Syed Mushtaq Ali Trophy.

The then chairman of selectors Atul Wassan had said that Pant’s batting was becoming an issue as he was feeling the pressure of captaincy and that’s why he was removed. Pant had only managed to score 315 runs in Ranji Trophy.

“We observed during Ranji Trophy that Pant was feeling the pressure of captaincy. He wasn’t able to take it. We didn’t want it to happen this time around because T20 is the format he enjoys and we want him to score runs and do well for the team. We discussed the same with coach (KP) Bhaskar and he was on the same page and felt captaincy was affecting his batting and he wasn’t able to play his natural game,” Wassan told The Indian Express.

This season with the Delhi Capitals, who appointed him skipper at the start of the 2021 edition, Pant blew hot and cold with the bat and scored 340 runs at an average of 30.91 and strike-rate of 151.79. Pant is a quick learner on the field. After facing flak for his bowling changes in the series opener, Pant regained control in the middle quickly as the hosts staged an emphatic comeback to level the series after losing first two games.

The decision making only got better with every game as Pant looked more in control in the third and fourth fixture of the series.  The opinions will keep rolling in but it’s on the Indian team management as to how do they want to use the services of this exceptionally exciting player. With the mainstays returning to action with the England series, Pant will be relieved from captaincy duties but Dravid & Co. would desperately want Pant-the-batter to fire on all cylinders with the bat.

Denial of responsibility! TechiLive.in is an automatic aggregator around the global media. All the content are available free on Internet. We have just arranged it in one platform for educational purpose only. In each content, the hyperlink to the primary source is specified. All trademarks belong to their rightful owners, all materials to their authors. If you are the owner of the content and do not want us to publish your materials on our website, please contact us by email – [email protected]. The content will be deleted within 24 hours.
CaptainFirstcricketFirstpostlongNewsnews updatePantRishabh
Share

2022 World Series of Poker In Review: Week Three Highlights and What to Look Forward To