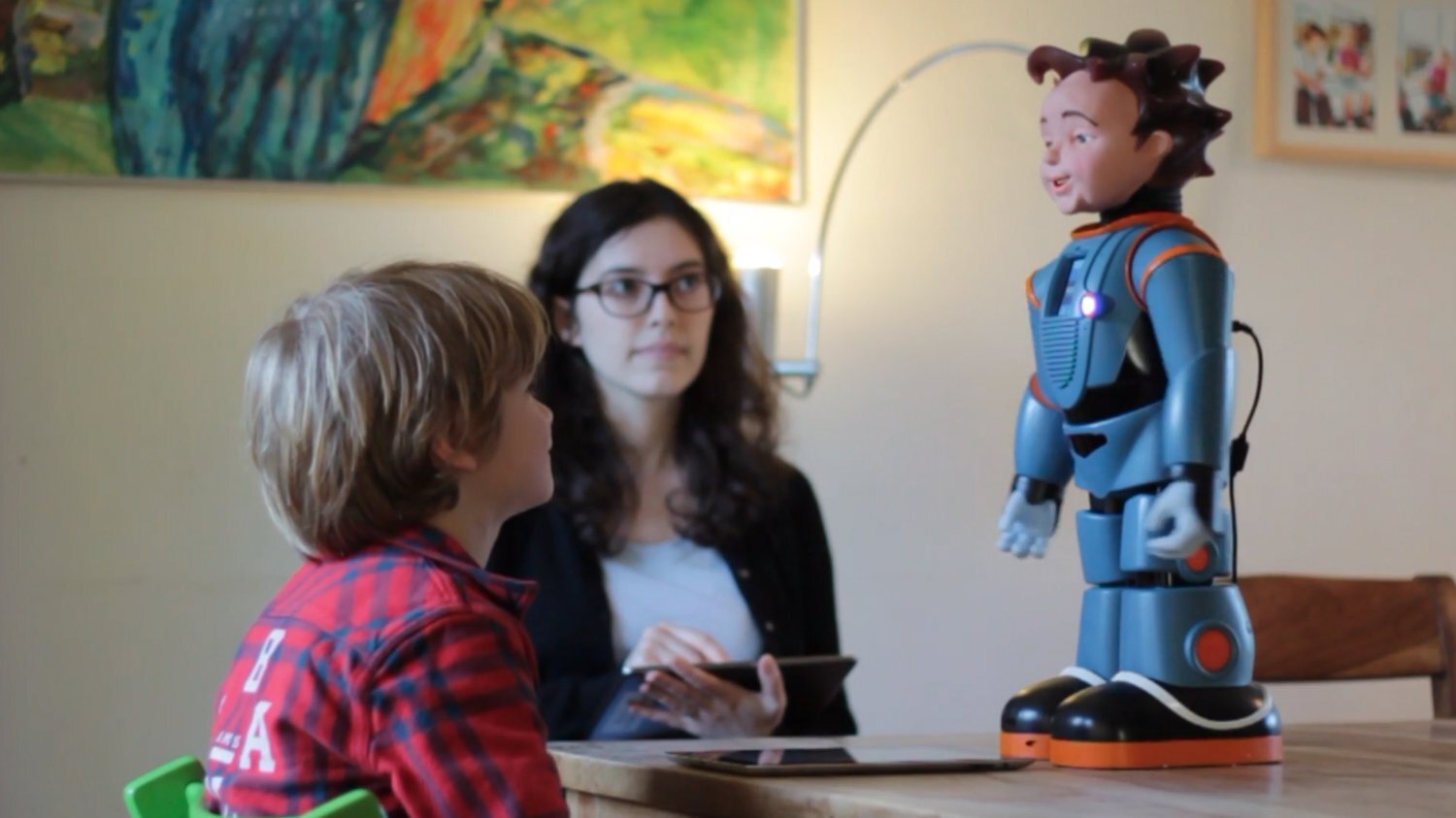 Researchers at the University of Twente have discovered that primary school children in both regular and special needs schools make strides when they learn together with a robot. On 30 April, both Daniel Davison and Bob Schadenberg will obtain their Ph.D.s from UT, with comparable research but working in different contexts.

Whereas Davison’s robot worked independently at a Montessori primary school, Schadenberg took his robot lab, with explanations, to a special class for autistic children. Davison: “As far as I know our Zeno robot is the first to have spent this long—four months—working independently in a classroom. Our results show that social robots have the potential not just to help educate children but to improve their mindset with regard to their own learning process and intelligence. We also saw that children returned to the robot for help with their tasks throughout the entire period, even after the initial novelty had worn off. This is a very promising result, and it paves the way for more of this kind of long-term research.”

Schadenberg’s study examined whether a robot could support learning processes for children with an Autistic Spectrum Disorder (ASD, hereinafter referred to as ‘autism’). His Zeno social robot was deployed as an assistant in the supervision of these children by a teacher or therapist. Schadenberg: “I was there myself, too, given that my study was also about the design of the robot, which I wanted to be a close fit with the kinds of interaction suited to autistic children. The results showed that these interactions varied widely from one child to another, partly because of how autism affects the development of the individual child. The robot needs to anticipate this fact in determining how best to communicate with these children. Our results will now allow us to develop more tightly-focused robots able to take account of the differences between individual children.”

Davison’s study made use of a Zeno robot that worked independently for four months at Montessori primary school Het Zeggelt, with children from six to nine years of age. The Zeno robot was able to give individual feedback on tasks and learning processes. In Davison’s view, a social robot can help to change a child’s mindset about their own learning process—for instance, in reacting to mistakes. Davison: “After making a mistake, children are often inclined to think “I can’t do that’ or ‘what’s the point, I won’t get it right anyway.” Zeno helps to motivate a child after a mistake has been made, and we saw that children who worked with the robot were better able to explain their reasoning. They also showed a growth in their mindset towards learning itself.”

Schadenberg’s research used the Zeno social robot in special needs schools in the Netherlands, the UK, and Serbia, as a learning assistant for autistic children being supervised by a teacher or a therapist. These children needed considerable support; some understood little spoken language or were simply unable to speak. By using extremely simple language, and by offering an alternative communication channel with the robot through a tablet, these children were able to follow the curriculum.

An important element in the robot’s behavior was its predictability, as this is an important concept in autism. Many autistic children have difficulty dealing with change, and therefore prefer predictable environments. While adult behavior is sometimes hard to predict, a robot can easily be programmed to be extremely predictable. Schadenberg: “Our results showed that the children paid significantly more attention to their tasks when the robot displayed predictable behavior. A robot can therefore be a useful tool for teachers and therapists in practicing basic social skills because the children need to pay less attention to decoding unpredictable behavior and can focus more closely on the learning material itself. We are talking here about the basic principles of social skills, as in time these children will also have to be able to apply their social skills in interactions with unpredictable people.”

One of the Zeno robots used in the DE-ENIGMA project, Serbian Society of Autism donated to the Anton Skala Elementary School in Belgrade. Due to the significant results during the project, they were very motivated to continue working on the development of social skills and emotion, which are a challenge for children with autism.

Primary school children benefit from learning with a social robot

Provided by
University of Twente

Loading...
Denial of responsibility! TechiLive.in is an automatic aggregator around the global media. All the content are available free on Internet. We have just arranged it in one platform for educational purpose only. In each content, the hyperlink to the primary source is specified. All trademarks belong to their rightful owners, all materials to their authors. If you are the owner of the content and do not want us to publish your materials on our website, please contact us by email – [email protected]. The content will be deleted within 24 hours.
benefiteducationgadget updaterobotsspecialstudentstech newstech update
0
Share