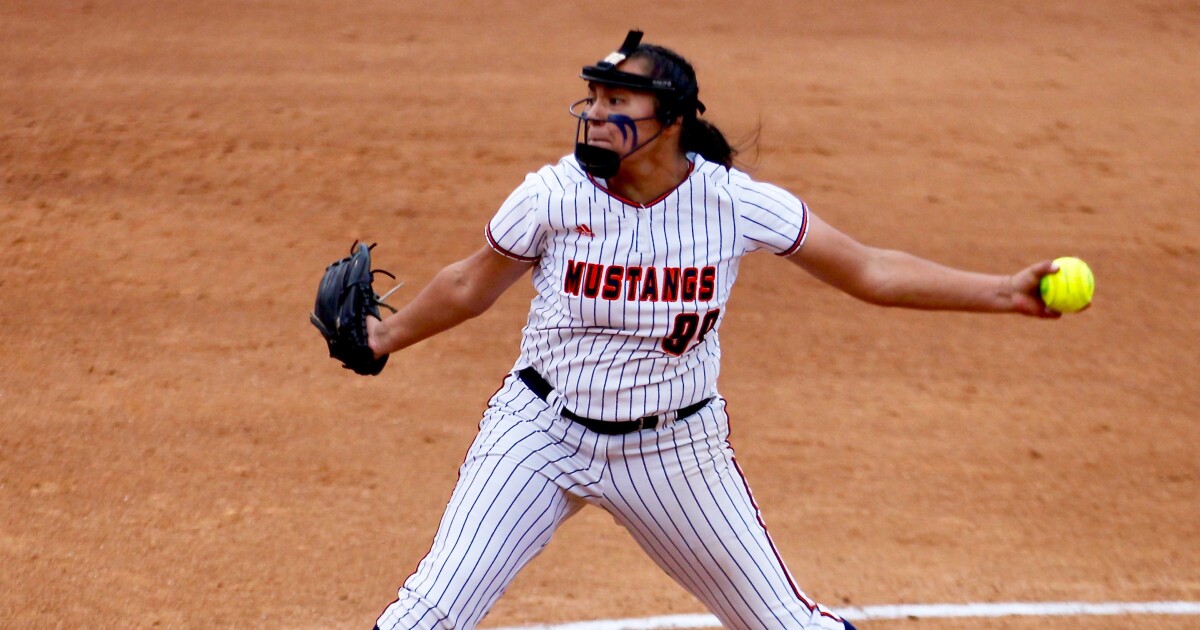 Down to its last at-bat and trailing by three runs, the Eastvale Roosevelt softball team never stopped believing.

With the bases loaded and one out, Jordan Elias singled to drive in one, then Emily Carr slapped the ball through a hole on the right side of the infield to clear the bases and lift the Mustangs to a thrilling 5-4 victory over Los Alamitos in the Southern Section Division 1 softball final Saturday night at Bill Barber Park in Irvine.

Los Alamitos entered postseason play unseeded but reached the final to set up a championship duel between powerhouse programs and legendary coaches.

Roosevelt coach Mike Smith became the first in Southern Section softball history to lead three programs to Section titles, having won one at Chino Hills in 2005 and adding titles at Chino in 2012 and 2013.

“You’ve got to get 21 outs to win,” Los Alamitos coach Rob Weil said. “Mike and I are good friends. He’s a great competitor, and we always have good battles.”

Said Carr: “Coach [Smith] is rough around the edges, but he believes in us and told us it was our destiny to win. I’m glad we proved him right.”

The game could not have started better for Los Alamitos. Leadoff hitter Julie Holcomb beat out a bunt single and Jazzy Santos followed with a double to right-center field that scored Holcomb.

Roosevelt responded in the bottom of the first on a bases-loaded single by Alexia Lopez, but Los Alamitos pitcher Sydney Saldana escaped the jam when Marissa Morales grounded into a fielder’s choice and Jordan Elias grounded out to shortstop.

The score remained 2-1 until two outs in the fifth when Callie Fitzpatrick belted a solo home run one foot inside the left-field foul pole to pad the Griffins’ lead. One inning later, Johnson launched a 1-1 pitch high over the center-field fence to make it 4-1.

The third-seeded Mustangs (27-3) had runners at second and third with one out in the third but failed to score. In the fifth, with two outs and two runners on, Saldana struck out pinch-hitter Cheyanne Castille swinging. Priscilla Llamas doubled to right-center in the sixth but was left stranded.

After pitching a four-hitter in Roosevelt’s 3-0 semifinal shutout over Gahr, Llamas struck out seven Los Alamitos batters in a complete-game effort that proved to be just good enough for a Mustangs squad that had fallen to Esperanza 3-2 in the final last year.

The Griffins (24-8) knocked off top-seeded Westlake Village Oaks Christian 4-0 in the semifinals but were unable to pull off the upset of the Big VIII League champions, who entered the game having won 10 straight.

Weil confirmed that his team will not participate in the Southern California Regionals.

“A lot of the girls play travel ball. We took a vote, and the majority of them said no,” Weil said. “It’s hard to console them after they’re two outs away from a CIF title.”

Denial of responsibility! TechiLive.in is an automatic aggregator around the global media. All the content are available free on Internet. We have just arranged it in one platform for educational purpose only. In each content, the hyperlink to the primary source is specified. All trademarks belong to their rightful owners, all materials to their authors. If you are the owner of the content and do not want us to publish your materials on our website, please contact us by email – [email protected]. The content will be deleted within 24 hours.
AlamitosdivisionFinalLosnews updateralliesRooseveltSection
Share

Opinion | Two Americas After the Fall of Roe