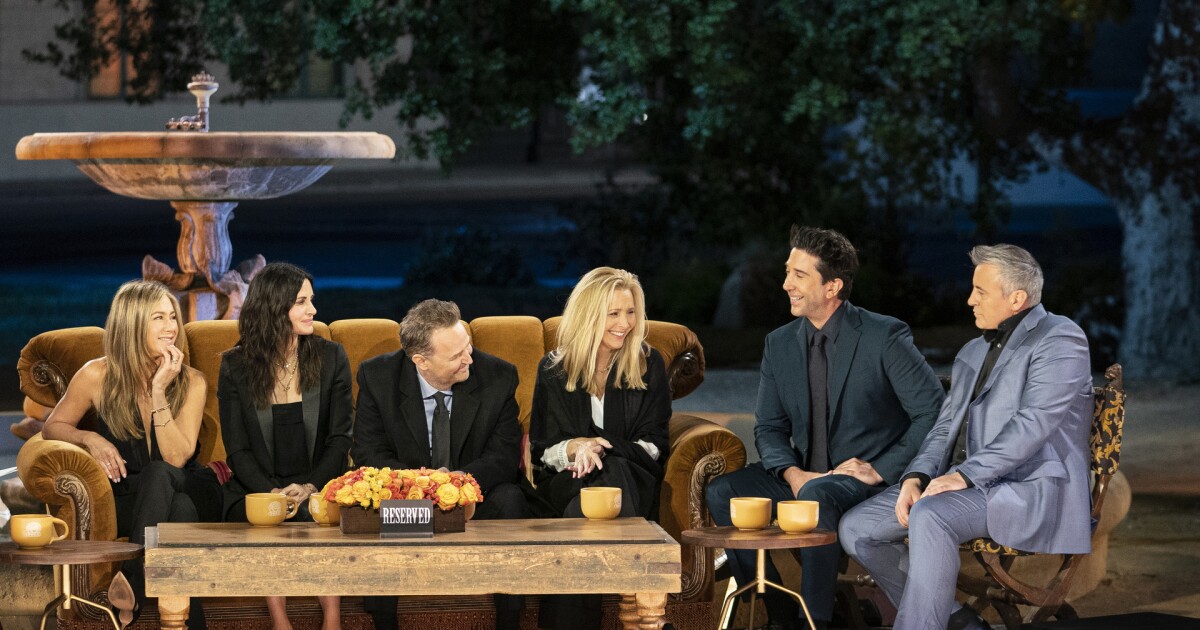 “Will you allow me to ask what I would consider to be a cheeky question?” host James Corden says to the cast of “Friends” during the beloved sitcom’s highly anticipated reunion special, premiering Thursday on HBO Max. “It’s impossible not to realize and see that you are all young, hot, good-looking, successful actors. It’s inconceivable to me that there weren’t, perhaps, off-screen romances.”

As the six friends look around, Jennifer Aniston (who played Rachel Green) goes wide-eyed while David Schwimmer (who played her on-again, off-again love interest, Ross Geller) glances over at her before breaking his silence.

“The first season I had a major crush on Jen,” Schwimmer reveals — with Aniston adding that the feelings were reciprocated.

“At some point we were both crushing hard on each other, but it was like two ships passing because one of us was always in a relationship,” Schwimmer continues. “And we never crossed that boundary. We respected that.”

“When we had breaks from rehearsal, there were moments we would cuddle on the couch,” he adds. “We would spoon and fall asleep on the couch … and I kept thinking, how did not everyone know we were crushing on each other?”

Matthew LeBlanc, who played Joey on the show, affirms, “We knew. We knew for sure.”

For the series that entered “We were on a break!” into the cultural lexicon, it may be the biggest news out of the long-delayed reunion, which filmed over two days in April after being postponed by the COVID-19 pandemic.

Kevin Bright, executive producer of “Friends,” told The Times that rumors and suspicions floated around set regarding Schwimmer and Aniston‘s mutual attraction but that ultimately everyone lived vicariously through their characters. But not everyone was clued in: David Crane, the co-creator of “Friends,” said he didn’t know about the crush at the time — though he admitted it was fun to learn of its existence.

Cox said it was probably for the best that the relationship between Schwimmer and Aniston didn’t pan out, in case the pair broke up during filming. Though Aniston ventured that Rachel and Ross, who ended up together in the series finale after she got off that plane to Paris, are probably now married with kids.

The question about Schwimmer and Aniston’s crush was pre-planned by Ben Winston, the director of the “Friends” reunion, who got to know the cast over Zoom before taping the special. Schwimmer told Winston that there was something he and Aniston had never spoken about before, but he was unsure if he wanted to talk about it. And neither, after he asked Aniston about it, was she.

Winston then fed the question about the “good-looking, successful” cast to Corden — who asked it without knowing to expect the response — in hopes of stirring a reaction..

“You can see David and Jen are a bit like, ‘Shall we answer this? Oh, what the heck, let’s do it,” Winston told the Times. “And so I was really delighted. It makes you look at all that whole arc [between their characters] through a real different lens.”

The reunion features a scene from Season 2, a turning point for Rachel and Ross’ relationship, where they share their first kiss in a coffee shop. But it was also a significant moment for the actors as well.

“Honestly, I remember saying one time to David, ‘It’s going to be such a bummer if the first time you and I actually kiss is going to be on national television. … Sure enough, first time we kissed was in that coffee shop,” Aniston said. “We just channelled all of our adoration and love for each other into Ross and Rachel.”

Denial of responsibility! TechiLive.in is an automatic aggregator around the global media. All the content are available free on Internet. We have just arranged it in one platform for educational purpose only. In each content, the hyperlink to the primary source is specified. All trademarks belong to their rightful owners, all materials to their authors. If you are the owner of the content and do not want us to publish your materials on our website, please contact us by email – [email protected]. The content will be deleted within 24 hours.
Anistoncrushentertainment newsEntertainment updateFriendsIRLnews updateRachel
0
Share

In ‘Cruella,’ Fashion Is Toxic