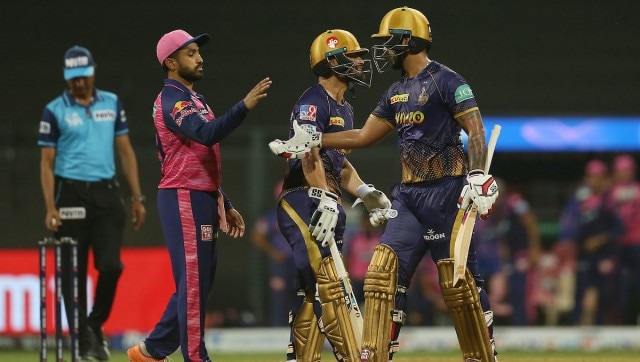 RR vs KKR, IPL 2022: Why did Buttler and Samson go slow? How RR erred with their plans? – Firstcricket News, Firstpost

Kolkata Knight Riders rode on an unbeaten 66-run stand between Nitish Rana and Rinku Singh to complete a seven-wicket win over Rajasthan Royals and grab two crucial points after losing five successive matches. In a game that saw KKR bowlers strangle the RR batters and put a leash on the scoring rate there were several contentious choices made. A few burning questions popped up in our heads during the game and we put it across here.

Why KKR’s handling of Shivam Mavi has been poor

Shivam Mavi has played five matches this IPL, taking four wickets at an average of 44.25 and an economy rate nearly touching 10 runs per over. Definitely not ideal numbers, but it’s worth pointing out that Mavi has been in and out of the side right through the season.

Mavi had a strong season in 2021 and has constantly enjoyed the backing of the KKR management in the past, which makes him being dropped after the first two matches this year an odd call. To top it off, KKR repeated the sequence when he was eventually recalled into the XI, playing him in two matches before benching him again, only to play him again two games later.

Is Sunil Narine the most difficult bowler to get away in IPL history?

Sunil Narine bowled a spectacular spell of 4-0-19-0 to completely tighten the screws on Rajasthan Royals. This season, Sunil Narine has clocked an economy rate of 5.25 across 40 overs, an incredible feat in a line-up where four regular bowlers have gone at over eight runs per over. Despite Narine’s outstanding season with the ball, KKR haven’t been able to push the advantage with the others around him faltering.

Across his IPL career, Sunil Narine has an economy rate of 6.64. The brilliant economy rate this season is a massive drop from 2019, where he clocked an economy rate of 7.82. He hasn’t, however, been amongst the wickets as much as in 2019, and an average of 30-plus this year is a sign of him being used as a defensive bowler.

Is he the best defensive bowler in IPL history, though? Not really. Among bowlers to bowl 500 or more deliveries in IPL history, Narine comes third in terms of economy rate behind Rashid Khan and Anil Kumble. However, while Rashid Khan has no four-plus wicket hauls, Narine has eight such hauls in his IPL career.

Why did Jos Buttler and Sanju Samson adopt a go-slow approach?

Rajasthan Royals’ innings petered to a mediocre end after Jos Buttler and Sanju Samson adopted a go-slow approach. While Buttler took his time settling in against some quality new ball bowling from Umesh Yadav, Samson started at decent clicks only to score four of his last 11 balls to make a half-century that raised a few debates.

These are two of the most phenomenal hitters in the top-order going at a scoring rate below and just above hundred. What prompted Buttler and Samson to take such an approach? On a two-paced Wankhede deck, Umesh and Anukul Roy bowled brilliantly in the powerplay overs and Buttler took no undue risks, an approach he has donned many times this season. While he couldn’t accelerate post that, this isn’t the first time Buttler has looked to play himself in to cash in later.

The more surprising approach was that of Samson, who rarely plays an anchor role and prefers to go hard even in dire situations to look to turn around the advantage. But with batting depth a concern, and his own string of ordinary scores this year – although his strike-rate has been fantastic, Samson hasn’t put up big scores – Samson took a cautious approach that backfired towards the end when he put too much pressure on himself with a series of dots and then got out.

Alex Hales was one of the saving graces for Kolkata Knight Riders after a dismal auction where they couldn’t plug big holes in their line-up. But with the England opener backing out of the tournament, KKR were in a pickle as they lacked a solid opener who can give quickfire starts. They opted to go for Aaron Finch as his replacement, a decision that arguably cost them more than they think.

For one, Finch’s striking capabilities have come down massively in even T20Is. Since 2021, he averages in the mid-20s for Australia, while striking at a rate of less than 120. Going for reputation over performance saw them end up with another opener who cannot maximise the powerplay overs.

In the IPL itself, Finch has the worst batting average and batting strike-rate for an opener since 2019 with a basic filter. The fact that there are so many options to choose from in this role makes KKR’s choice very ordinary. Aside from the fact that Finch hasn’t been great of late, he’s just not the right player that KKR needed at the top and the decision is proving to be costly already with him dismissed in the single digits in three of the four matches.

Why RR erred in their plans against Nitish Rana

Nitish Rana is a pretty good middle-order batter, who has often floated under the radar a bit. A terrific player of spin, Rana has been a mainstay in the KKR middle-order and came into this game off the back of a fine half-century in the previous one. This time, with more time on his hands, and an ordinary target to chase down, Rana made merry, finishing unbeaten on 48 in 37 balls.

He was, however, helped by Rajasthan’s ordinary bowling moves against him. Using Ravichandran Ashwin against Rana, possibly because he is a left-hander, was the wrong call given Rana’s outstanding record against off-spinners and Ashwin himself. In IPL history, no one to face 150 or more balls from an off-spinner has a better strike-rate than Rana’s 166.67. Against Ashwin, Rana has made 99 runs off 52 balls with no dismissals.

On the flip side, Rana has been dismissed thrice by Chahal since 2021, but the leg-spinner was held back for the 18th over. Despite Chahal being phenomenal at the death this season, Rajasthan needed to break the Nitish Rana – Rinku Singh stand to win the game, and their best bowler in the season bowled his last when the game was nearly decided.

Despite RR having two high-pace quicks up their sleeve – Nitish Rana struggles against high pace and bounce – he faced just 10 balls combined from Prasidh Krishna and Kuldeep Sen and 14 balls from Ashwin.

Denial of responsibility! TechiLive.in is an automatic aggregator around the global media. All the content are available free on Internet. We have just arranged it in one platform for educational purpose only. In each content, the hyperlink to the primary source is specified. All trademarks belong to their rightful owners, all materials to their authors. If you are the owner of the content and do not want us to publish your materials on our website, please contact us by email – [email protected]. The content will be deleted within 24 hours.
ButtlererredFirstcricketFirstpostiplKKR&Newsnews update
Share