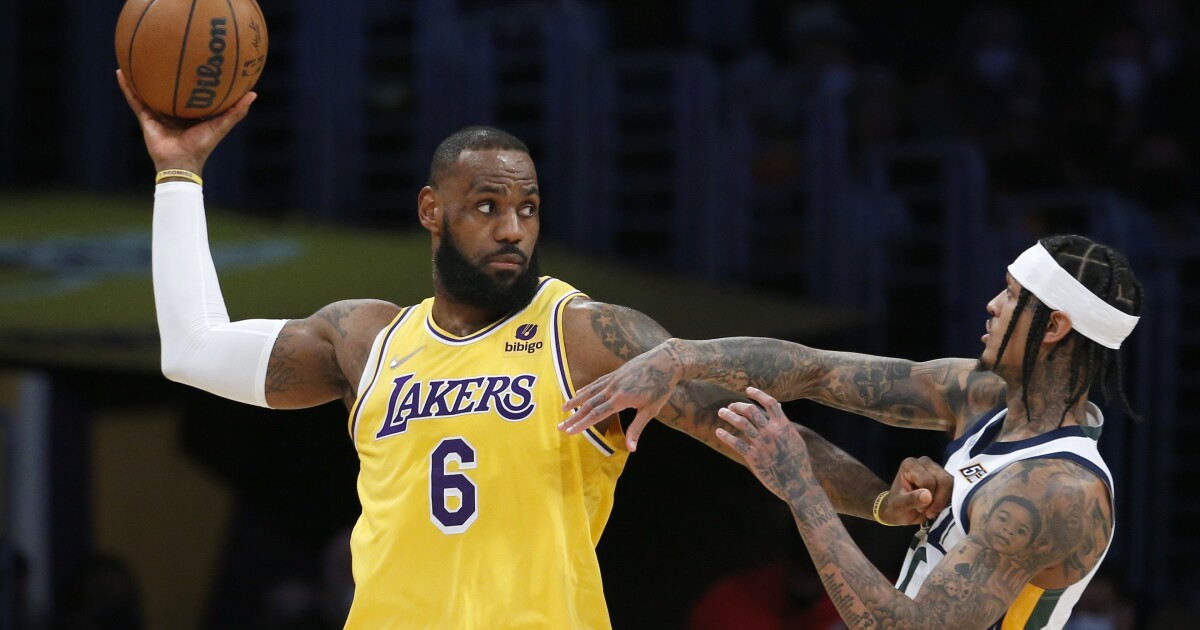 Before the Lakers’ Russell Westbrook made a mess of Utah center Rudy Gobert, he cleaned up.

Early in the first quarter Monday night, Utah star Donovan Mitchell slipped on a spilled drink, stopping action while officials and Crypto.com Arena staff grabbed for towels. Westbrook, searching for a more simple solution, went underneath the nearest basket and grabbed a mop.

That was polite — what was about to happen later in the half was much more rude.

Displaying the kind of athleticism and ferocity that he hasn’t really shown since being traded to the Lakers this summer, Westbrook hit the paint, jumped and uncorked a violent one-handed slam over one of the NBA’s premiere defenders.

If that was the moment of the season, this might’ve been the best win to go along with it — a 101-95 victory in which the team came back from a 10-point deficit in the second half to even its record at 22-22.

LeBron James led five Lakers in double digits while the team rediscovered some defensive snarl after being walked over in three straight losses. It ended with the entire team on their feet celebrating a Westbrook three-point play that capped what has to be considered their biggest win of the season.

And then there was Stanley Johnson, signed to his third 10-day contract with the Lakers earlier Monday before playing like someone who the team needs to keep from walking out the door again.

Playing center with LeBron James and mostly reserves, Johnson repeatedly attacked Gobert without any fear for the French player nicknamed “The Stifle Tower.”

Possession after possession, his confidence grew, Johnson playing to the crowd, flexing at Gobert and refusing to back down even though he’s functionally an hourly employee playing against a bunch of tenured professionals.

Johnson scored 15 points on seven-of-nine shooting with 10 of those points coming in the fourth quarter as the Lakers needed to mount a comeback.

Spurred on by Johnson’s play, the Lakers started flying around the court with the kind of energy they’ve been unable to sustain all season.

It all had to mean a lot to the Lakers and to coach Frank Vogel, who was starting to lose his ability to disguise how losing affected him.

But when it comes to the way his team is playing, there’s always been a seriousness — Vogel trying to get the Lakers to be a team defined by effort, intensity and defensive aggression.

It’s why that veneer of positivity briefly got pulled back Monday, the stench of the worst loss of the Lakers’ season still following the team into their game with the Jazz.

Vogel talked about how Lakers legends should be disappointed, about how his team wasn’t playing hard enough and didn’t have the necessary defensive habits. He said Saturday’s blowout loss at Denver did stick with him … only to add that each of the last three losses felt that way.

And, most telling of all, the Lakers’ patron of positivity admitted this was all grinding on him a little bit.

“Not seeing the results wears on you,” Vogel said pregame. “I will say that strongly.”

Even though the team got bad news on guard Kendrick Nunn — he was nearing a return from an injured knee but suffered a setback with his bone bruise — the team proved it could grind out a win when things didn’t exactly go its way.

After making eight of their first 12 from three-point range, the Lakers finished with just three more makes on 25 attempts. They were outscored by seven at the foul line. And Trevor Ariza, pushed into the starting lineup, went just one for eight from the field.

But whether it was showy stuff like Westbrook’s dunk, James’ repeated aggression or Johnson’s fearlessness, the Lakers grabbed a win and some good vibes for a team — and coach — that needed them.

Denial of responsibility! TechiLive.in is an automatic aggregator around the global media. All the content are available free on Internet. We have just arranged it in one platform for educational purpose only. In each content, the hyperlink to the primary source is specified. All trademarks belong to their rightful owners, all materials to their authors. If you are the owner of the content and do not want us to publish your materials on our website, please contact us by email – [email protected]. The content will be deleted within 24 hours.
defeatJazzJohnsonLakersnews updateRussellSparksports news
Share