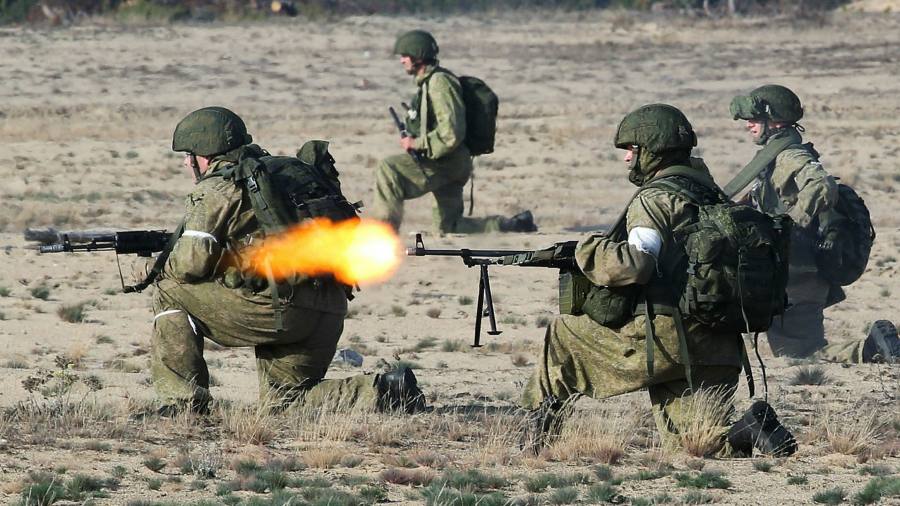 Russia and Belarus are expected on Thursday to strengthen political and security ties as they also start a joint military exercise that is rattling European neighbours.

Belarus’s strongman leader Alexander Lukashenko is due in Moscow for his fifth meeting this year with Russian president Vladimir Putin. Lukashenko wants to shore up Russia’s support after his brutal crackdown on dissent following a disputed presidential election prompted US and EU sanctions.

Moscow is prepared to add to the $1.5bn it lent Minsk last year, according to Russia’s finance minister Anton Siluanov, while Lukashenko said Belarus would soon buy a big consignment of Russian military equipment — possibly including its state of the art S-400 anti-aircraft system.

The two countries also started the Zapad-2021 military exercises on Thursday. Belarus has said 13,000 troops may be directly involved although Russia has claimed the exercises will involve up to 200,000 troops, which would make them among the largest in history.

The drill, held every four years, has alarmed Belarus and Russia’s EU and Nato-member neighbours, who are depicted as lightly fictionalised adversaries in the exercise.

Poland declared a state of emergency this week ahead of the exercises, which prime minister Mateusz Morawiecki said could end in “provocations”. Poland has also experienced an increase in illegal migration from Iraq and Afghanistan that Warsaw blames on Belarus.

Lukashenko has described the protests, which drew hundreds of thousands of people to the streets at their height last year, as a western attempt to overthrow him and destabilise Russia. He has called on both countries to face a common threat.

“We effectively have a single army, with the Belarusian military forming its backbone in the western direction,” Lukashenko said last week. “If, God forbid, a war starts, the Belarusian army will be the first to engage in the fight, and the western group of Russia’s armed forces will join quickly after to form a joint defence.”

The summit may also underscore how dependent Lukashenko has become on Russia to ensure his survival — and how he remains a problematic ally for the Kremlin even as it backs his increasingly repressive rule.

Belarus lacks the funds to pay for the military equipment Lukashenko said it would acquire, meaning that Russia will have to provide it at a significant discount or in exchange for political concessions.

“Promising to make major arms purchases from Russia is a way from Lukashenko to evade Russia’s demands to integrate their militaries further. Especially since he’s mostly planning to buy it on Russia’s tab,” said Ruslan Pukhov, director of the Centre for Analysis of Strategies and Technologies, a Russian defence think-tank.

“Obviously, Lukashenko was forced to strengthen integration with Russia after the protests, but he’s still avoiding becoming too dependent on Russia in a very flexible and skilful way.”

The 28 agreements that Putin and Lukashenko are set to announce stem from a stalled 1999 “union state” treaty. However both sides have dialled down expectations for the summit after dropping key demands.

The deal is likely to omit measures that Minsk feared would cost it sovereignty, such as adopting the Russian rouble, as well as longstanding Belarusian priorities such as a deal to buy gas at domestic Russian prices.

“It suits Minsk just fine and Russia’s not prepared to do anything more to change the situation. If Lukashenko signs it then he can get some sort of new loan,” said Artyom Shraibman, founder of Belarusian political consultancy Sense Analytics.

The Zapad exercises have provoked less alarm in western capitals than in 2017, when Russia’s use of snap military drills as a pretext for the invasion of Crimea three years earlier was still recent, said Michael Kofman, a senior research scientist at CNA, a US policy studies non-profit organisation.

“There were reciprocal fears on both sides. We really didn’t know what Russia’s intentions were,” Kofman said. “Now, the actors’ perceptions of each other [have] stabilised.”

For Moscow, the main goal of the exercises is to maintain combat readiness rather than provoke the west, Pukhov said. “Since it’s obvious that Nato’s military potential exceeds Russia’s several times over, the only way Russia can withstand Nato’s military superiority is through rapid reaction and quick deployment,” he said.

Nonetheless, the Baltic states sense that the potential for mischief is higher during this year’s exercises because of Lukashenko’s erratic behaviour. In May, he scrambled a fighter jet to force the landing of a Ryanair plane carrying a prominent dissident. Since then, Poland and Lithuania have accused him of massing tens of thousands of migrants on their border.

The Baltic states increasingly view Belarus as being run by a rogue regime, with Marko Mihkelson, chair of the foreign affairs committee of Estonia’s parliament, describing Lukashenko as “a madman”.

He added: “If you have equipment at the border like machine guns and sniper rifles, you never know when this tension can turn into a provocation. Lukashenko needs an enemy, and European countries are very useful for that. Of course, he could exploit this.”

All three Baltic states and Poland — each the base for a multinational Nato battalion — have clear rules of engagement for any border incidents, officials say, but still there is concern over the chance of a mistake.

Edgars Rinkevics, Latvia’s foreign minister, added that there was a “rather high potential” for a misunderstanding not approved by superiors, such as when a US aircraft was shot down by the Soviet Union during the Cuban missile crisis. “Such things can be dangerous,” he added.

Denial of responsibility! TechiLive.in is an automatic aggregator around the global media. All the content are available free on Internet. We have just arranged it in one platform for educational purpose only. In each content, the hyperlink to the primary source is specified. All trademarks belong to their rightful owners, all materials to their authors. If you are the owner of the content and do not want us to publish your materials on our website, please contact us by email – [email protected]. The content will be deleted within 24 hours.
Loading...
BelaruscloserdealDrillsEducation newsEducation updateEmbraceMilitary
Share

Saif Ali Khan, trolled for naming sons Jehangir and Taimur, reacts to negativity: ‘We are good people, we pay our taxes’