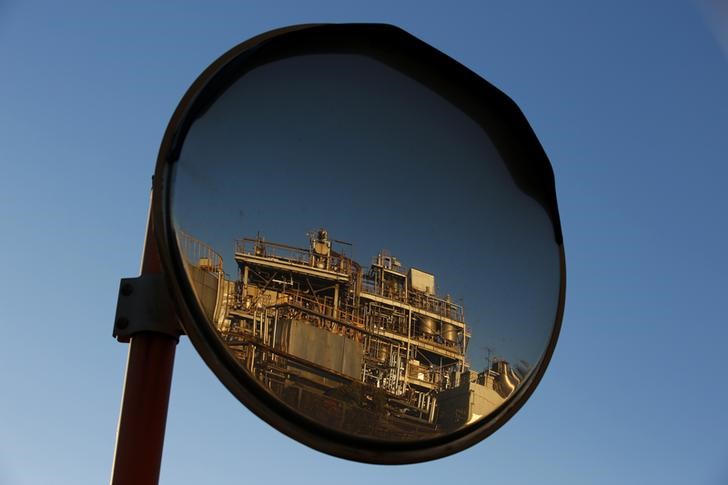 © Reuters. Local women walk along a street while Ukrainian servicemen patrol an area, as Russia’s attack on Ukraine continues, in the town of Kurakhove, in Donetsk region, Ukraine May 20, 2022. Picture taken May 20, 2022. REUTERS/Anna Kudriavtseva

By Pavel Polityuk and Conor Humphries

KYIV/SLOVYANSK, Ukraine (Reuters) -Russian forces waged an all-out assault on Tuesday to encircle Ukrainian troops in twin cities straddling a river in eastern Ukraine, a battle which could determine the success or failure of Moscow’s main campaign in the east.

Exactly three months after President Vladimir Putin ordered troops into Ukraine, authorities in its second-largest city Kharkiv re-opened the underground metro, where thousands of civilians had sheltered for months under relentless bombardment.

The move reflected Ukraine’s biggest military success in recent weeks: pushing Russian forces largely out of artillery range of Kharkiv, as they did from the capital Kyiv in March.

But the decisive battles of the war’s latest phase are still raging further south, where Moscow is attempting to seize the Donbas region of two eastern provinces, Donetsk and Luhansk, and trap Ukrainian forces in a pocket on the main eastern front.

“The situation on the (eastern) front is extremely difficult because the fate of this country is perhaps being decided (there) right now,” Ukrainian Defence Ministry spokesman Oleksandr Motuzyanyk told a televised briefing.

The easternmost part of the Ukrainian-held Donbas pocket, the city of Sievierodonetsk on the east bank of the Siverskiy Donets river and its twin Lysychansk on the west bank, have become the pivotal battlefield there, with Russian forces advancing from three directions to encircle them.

“The enemy has focused its efforts on carrying out an offensive in order to encircle Lysychansk and Sievierodonetsk,” said Serhiy Gaidai, governor of Luhansk province, where the two cities are among the last territory still held by Ukraine.

“The intensity of fire on Sievierodonetsk has increased by multiple times, they are simply destroying the city,” he said on TV, adding there were about 15,000 people living there.

Further west in Slovyansk, one of the biggest Donbas cities still in Ukrainian hands, air raid sirens wailed on Tuesday but streets were still busy, with a market full, children riding bikes and a street musician playing violin by a supermarket.

Three months into a war that some Western experts predicted Russia would win within days, Moscow still has only limited gains to show for its worst military losses in decades, while much of Ukraine has suffered devastation. Around 6.5 million people have fled abroad, uncounted thousands have been killed and cities have been reduced to rubble.

The war has also had massive international ramifications, including growing food shortages and soaring prices caused by sanctions on Russia and disrupted supply chains. Both Ukraine and Russia are major exporters of grain and other commodities.

“In Russian-occupied Ukraine, the Kremlin’s army is confiscating grain stocks and machinery (…) And Russian warships in the Black Sea are blockading Ukrainian ships full of wheat and sunflower seeds,” she told the World Economic Forum in Davos, Switzlerland.

Earlier, she had called for talks with Moscow on unlocking wheat exports that are now trapped in Ukraine.

“The best and perhaps only way to preserve our civilization is to defeat Putin as soon as possible,” he said.

Underlining the global geopolitical tensions unleashed by the war, Japan – a key U.S. ally in Asia which has joined Western sanctions against Russia – scrambled jets on Tuesday after Russian and Chinese warplanes neared its airspace during a visit to Tokyo by U.S. President Joe Biden.

Comments by senior Russian officials on Tuesday suggested plans for a drawn-out conflict ahead.

In Kharkiv, hundreds of people were still living underground in trains and stations when the authorities asked them to make way on Tuesday so metro service could resume.

In one station, a few people were moving out, while others sat on makeshift beds or stood amid possessions and pets.

“Everyone is crazily scared, because there is still shelling, the rocket attacks haven’t been stopped,” said Nataliia Lopanska, who had lived in a metro train below ground for nearly the entire duration of the war.

The Donbas fighting follows Russia’s biggest victory in months: the surrender last week of Ukraine’s garrison in the port of Mariupol after nearly three months of siege in which Kyiv believes tens of thousands of civilians have died.

Petro Andryushchenko, an aide to Mariupol’s Ukrainian mayor now operating outside the Russian-held city, said the dead were still being found in the rubble.

Around 200 decomposing bodies were buried in rubble in a basement of one high-rise building, he said. Locals had refused to collect them and Russian authorities had abandoned the site, leaving a stench across the district.

Highlighting the obstacles to a diplomatic resolution of the conflict, a new poll on Tuesday showed 82% of Ukrainians believe their country should not sign away any territory as part of a peace deal with Russia under any circumstances.

In Russia, where criticism of what it calls a “special operation” is banned and independent media has been shut, jailed opposition leader Alexei Navalny used a court appearance by video link from a prison colony to denounce the “stupid war which your Putin started”.

“One madman has got his claws into Ukraine and I do not know what he wants to do with it – this crazy thief,” Navalny said.

Ukraine and Russia: What you need to know right nowGraphic on Russian invasionhttps://graphics.reuters.com/UKRAINE-CRISIS/zdpxokdxzvx/ANALYSIS-Putin takes Mariupol, but wider Donbas victory slipping from reachTIMELINE-Russia’s invasion of Ukraine enters fourth monthEXPLAINER-Ukraine looks for ways to get its grain out Ukraine gathers Russian dead in chilled train for prisoner exchange

Denial of responsibility! TechiLive.in is an automatic aggregator around the global media. All the content are available free on Internet. We have just arranged it in one platform for educational purpose only. In each content, the hyperlink to the primary source is specified. All trademarks belong to their rightful owners, all materials to their authors. If you are the owner of the content and do not want us to publish your materials on our website, please contact us by email – [email protected]. The content will be deleted within 24 hours.
alloutassaultbusiness newsBusiness updateeastencirclenews updateReuters
Share

Call Of Duty: Modern Warfare 2 (The New One) Releases This October