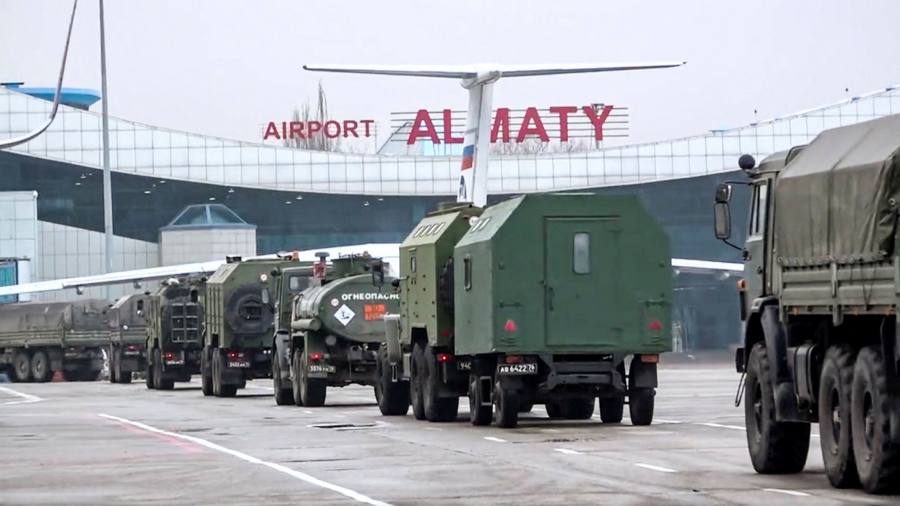 Russian troops will withdraw from Kazakhstan, the country’s president said, following a week of violent protests in which citizens demanded social and political change in the central Asian republic.

Kazakhstan’s president Kassym-Jomart Tokayev, who requested help from Russia last week after claiming the protests were a “coup d’état”, said on Tuesday that the Moscow-led military mission was complete and the contingent would leave the country within 10 days.

His comments came amid signs that the worst unrest in Kazakhstan’s modern history was beginning to calm. Witnesses in Almaty, the country’s largest city, said that cafés were reopening and families were going out for walks, while Tokayev said the situation was stabilising.

In his first move to rejig the government he sacked last week, Tokayev named Alikhan Smailov, an official from the previous regime, as the prime minister with the approval of parliament.

The protests began as peaceful demonstrations against fuel price rises and the longtime rule of Nursultan Nazarbayev, the 81-year-old former president who stepped aside as the head of Kazakhstan’s security council last week when the violence began.

Russia sent a peacekeeping mission from the Collective Security Treaty Organization bloc, consisting of 2,030 troops and 250 units of military equipment, to Kazakhstan to help quell what Tokayev called a terrorist threat with foreign influence.

On Monday, Vladimir Putin said that the Russian-led forces were securing critical infrastructure to “normalise the situation” and help “restore order to the country”, in comments that showed Moscow’s willingness to back allies in former Soviet states against street protests.

Kazakhstan’s own special forces focused on Almaty, where the most violent clashes left more than 100 people dead.

At least 164 people have been killed, including three children, and almost 8,000 people arrested in Kazakhstan, according to the country’s authorities.

“One has to understand, when we made that decision, we were risking losing control of Almaty, which would have been given up to the terrorists for grilling. Having lost Almaty, we would have lost the capital and then the whole country,” Tokayev said, notably avoiding mentioning the capital, which was renamed from Astana to Nur-Sultan in 2019 to honour Nazarbayev.

The name of the capital has been a source of debate in the past days, as protesters across the country demanded a break from the Nazarbayev era. Until last Wednesday, Nazarbayev still held effective power as head of the country’s security council, despite resigning from the presidency in 2019 after almost three decades in power.

Analysts said that the appointment of Smailov, who served as finance minister and deputy foreign minister before becoming deputy prime minister under Tokayev, indicated the limited human resource to staff official positions, with little immediate changes in the country’s top echelons.

“There are no others in Kazakhstan, they are all Nazarbayev people, just like Tokayev himself,” said Temur Umarov, a central Asia expert at Carnegie Endowment in Moscow. “We will be seeing a lot more of Nazarbayev’s people in important roles in the future. But they will be the ones Tokayev considers professionals, who are not financially linked to the Nazarbayev family and did not actively fawn under Nazarbayev.”

Tokayev fired the previous prime minister Askar Mamin and his cabinet last week, conceding to the demands of protesters. He then appointed Smailov as acting prime minister while the dismissed government continued to function until further changes were made.

Denial of responsibility! TechiLive.in is an automatic aggregator around the global media. All the content are available free on Internet. We have just arranged it in one platform for educational purpose only. In each content, the hyperlink to the primary source is specified. All trademarks belong to their rightful owners, all materials to their authors. If you are the owner of the content and do not want us to publish your materials on our website, please contact us by email – [email protected]. The content will be deleted within 24 hours.
business newsBusiness updateKazakhstansnews updatePresidentRussiantechi livetroops
Share