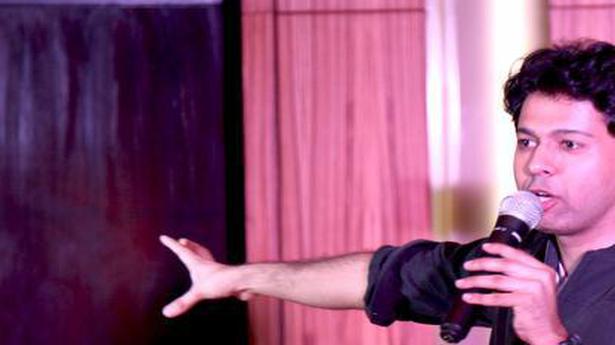 Two years ago, Saad Khan’s company, FirstAction Media, merged with the Mumbai-based Rainshine Entertainment. His first project for the parent company was underway soon after. It was the web series version of Humble Politician Nograj, an English-Kannada film he had directed in which his friend, Danish Sait, played the lead role. The series is yet to be released. Then, he wrote two more mini-series for Disney+ Hotstar — Chattis Aur Maina, a rom-com set in North India, and Ankahi Ansuni, a horror-thriller, which is yet to be released. In between these projects, he also managed to stage two improv shows in Bengaluru.

“It has been non-stop writing,” he says over the phone from Mumbai, where he is scouting for locations for another project. He is probably among the few who have been busy during the pandemic. “ I’ve always wanted to be in a situation where my hands are full with multiple projects. And that’s happening now. So, I hope to keep this momentum going.”

Chattis Aur Maina (produced by CM Studios) and Ankahi Ansuni are a part of Quix, Disney+ Hotstar’s series of shows with episodes as short as 10 minutes. “The short format will be the trend in the coming days,” predicts Saad. “It’s not just about the length; the content must be engaging as well. But with a 10-minute episode, the audience can quickly make a decision whether they want to watch the rest of the show or not,” he explains.

Dividing a nearly 150-minute story into 15 episodes, in the case of Chattis Aur Maina, threw up unique challenges for Saad and his fellow writers Pankaj Machvi and Ashutosh Chaturvedi and the director Shraddha Pasi Jairath. The show presents a love story of Chattis (Vikram Singh Chauhan), the son of a failed politician, and Maina (Sandeepa Dhar), who is part of a dance troupe.

“From a writing standpoint, we asked ourselves, how to present the series and what to establish in each episode, considering we don’t have a three-act structure. There are subplots, like the politics associated with a dancing troupe. We have also tried to show how a confident group of women tackle the misogyny they face. But at the end of the day, it’s a show for the family, so we needed to keep it light-hearted. It had to be about the journeys of the protagonists. We were conscious of not adding too many secondary characters,” explains Saad.

It has been almost 15 years since Saad began his career as a creator of plays, shows and films. Among the major changes over the years has been the evolution of digital media. “It has opened up more avenues for creators,” he says, “An aspiring writer can now easily get in touch with an established one for help. Also, with recent avenues like Twitter Spaces and Clubhouse, you get to understand your audiences better. So, it’s easier now to tailor content for your target audience.”

Denial of responsibility! TechiLive.in is an automatic aggregator around the global media. All the content are available free on Internet. We have just arranged it in one platform for educational purpose only. In each content, the hyperlink to the primary source is specified. All trademarks belong to their rightful owners, all materials to their authors. If you are the owner of the content and do not want us to publish your materials on our website, please contact us by email – [email protected]. The content will be deleted within 24 hours.
ankahi ansuniAurChattisChattis Aur MainaChattis Aur Maina downloadChattis Aur Maina episodesChattis Aur Maina hotstarChattis Aur Maina streaming
Share

Does Your LMS Do This? 10 Top LMS Features Missing From Your Current Platform