The SATA SSD space is fairly boring now – all excitement has shifted to the PCIe SSD category, and if you’re an enthusiast or gamer looking for the best speeds, that’s where you should be looking. The SATA protocol is a leftover from the days of spinning hard drives, and it definitely helped make transitioning to SSDs easier for everyone. SATA 3.0 has now gone as far as it can go in terms of performance, and there won’t be any future versions. While it had plenty of headroom in the beginning, SSDs have managed to fully saturate it for quite a while now. That means we’re in commodity territory – new models are iterative upgrades focused more on manufacturing efficiency than delivering new capabilities.

With that said, SATA SSDs aren’t going away anytime soon. They’re still relatively affordable and plenty of desktops as well as laptops are designed around them. A SATA SSD is a very quick and simple upgrade for an older PC – even a 120GB drive, which is more than enough to hold your OS and essential data, will cost less than Rs. 1,800 today. On the other hand, if you want lots of storage, you can get higher capacities and don’t have to worry about running out of M.2 slots.

So what is Samsung doing releasing a new SATA SSD model? The new Samsung SSD 870 Evo is an obvious replacement for the SSD 860 Evo, a popular workhorse that performed admirably in our review almost exactly three years ago. Here’s everything you need to know.

SATA SSDs are not as popular as they once were, but there’s still demand

The big difference with this generation is a shift to 128-layer TLC flash, which, of course, Samsung produces itself. As a side note, the company uses the marketing term “3-bit MLC” which might be a little misleading (it’s technically true – M stands for “multi” but is commonly understood to refer to two bits stored per cell). At least the lower-endurance QLC variety of flash is still confined to Samsung’s QVO SSD lineup. 128 layers is a pretty big jump in density from the SSD 860 Evo’s 64-layer chips. There’s also a new in-house Samsung controller called MKX.

Capacity options range from 250GB to 4TB. It’s important to note that while Samsung boasts of an impressive 530Mbps sequential write speed, that only applies to the 1TB and higher capacities; it gets cut down to 300MBps if you go with the 250GB or 500GB options. Sequential reads are rated at 560MBps which is as good as it gets in the SATA world.

Endurance ratings scale evenly, from 150TBW for the 250GB version to 2400TBW for the 4TB version. The lower two capacities each have a 512MB DRAM cache while the 1TB, 2TB and 4TB versions get 1GB, 2GB and 4GB respectively. The rated power draw also scales between 3.5W and 5W in use and between 30mW and 35mW at idle.

There’s 256-bit hardware AES encryption with support for the TCG/Opal standard and Windows 10’s eDrive feature. The warranty is 5 years or the TBW threshold of your capacity, whichever comes sooner.

There’s very little to say about physical quality – design hardly matters, but you do get a simple metal enclosure, and the whole thing weighs about 48g. The package it ships in has only a paper leaflet – the days of SATA SSDs coming in elaborate packages with cables and adapters are over.

It’s worth noting that Samsung has launched the SSD 870 Evo only in the 2.5-inch form factor. There’s no mSATA option anymore, but more surprisingly, there’s no M.2 option either. It’s unlikely that such an option will be introduced later, and Samsung seems to think there’s no need for a mainstream M.2 SATA SSD anymore, with NVMe prices coming down as much as they have. Conversely, it doesn’t look like there’s going to be an enthusiast-class SSD 860 Pro SATA successor. 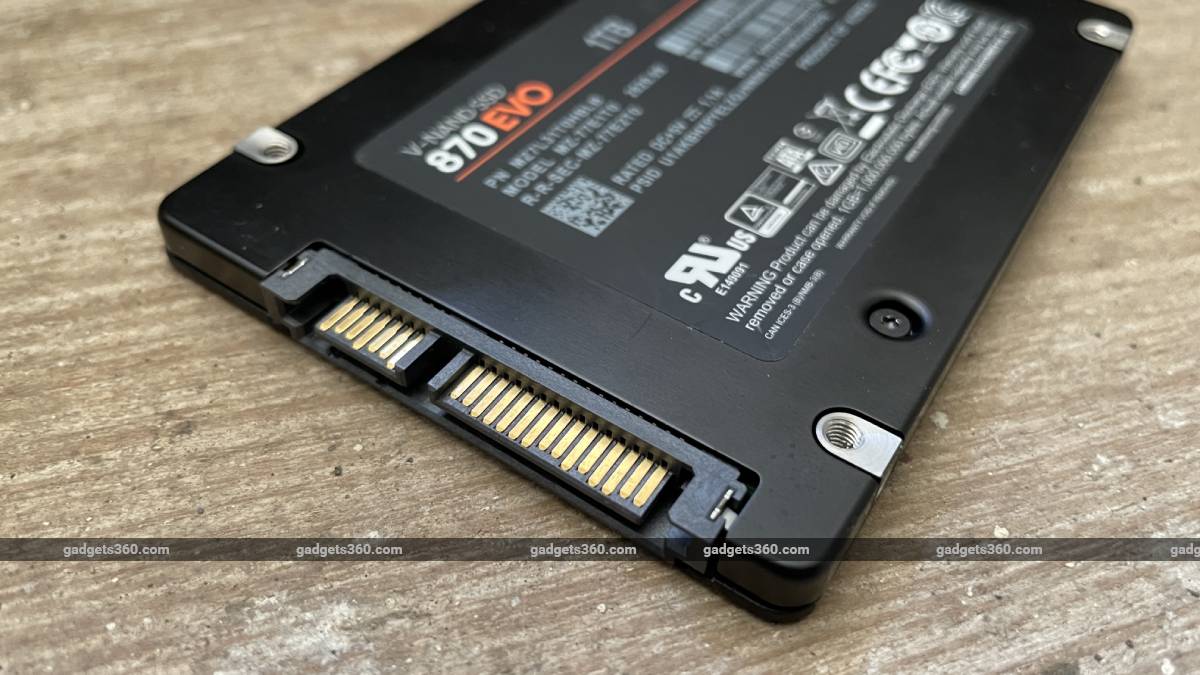 The Samsung SSD 870 Evo offers great performance within its category

One of Samsung’s best SSD features is the free software that you can download – if you know it exists. First, there’s a Data Migration Tool that will let you clone an older hard drive or SSD to a Samsung SSD, and it seems pretty straightforward. What’s more interesting is the brand new Samsung Magician SSD utility which has loads of features. You can check detailed stats including drive health, temperature and TBW; run a quick diagnostic and benchmark; set overprovisioning manually; set up encryption; and securely erase the entire drive. The only downside is that Samsung felt the need to display ads for its other products in the UI.

I tested a 1TB version of the Samsung SSD 870 Evo using an AMD Ryzen 2700 CPU, ASRock X470 Taichi Ultimate motherboard, 2x8GB of G.Skill F4-3400C16D-16GSXW DDR4 RAM, a trusty 1TB Samsung 860 Evo SSD, and a Corsair RM650 power supply.. All the latest drivers and OS patches were installed at the time of testing. Windows reported a total formatted capacity of 931.5GB.

CrystalDiskMark 6 showed sequential read and write speeds of 563.9MBps and 535.4MBps, slightly exceeding Samsung’s own rated speeds. Random reads and writes, which are a much more realistic indication of real-world use, came in at 403.7MBps and 377.1MBps respectively. Samsung Magician’s built-in benchmark also reported 563MBps and 535MBps respectively. Interestingly, the 1TB SSD 860 Evo had posted pretty much identical data speeds in both tests at the time of its own review. Finally, the Anvil benchmark reported read and write scores of 2,536.86 and 2,657,92 points for a total score of 5,194.78. 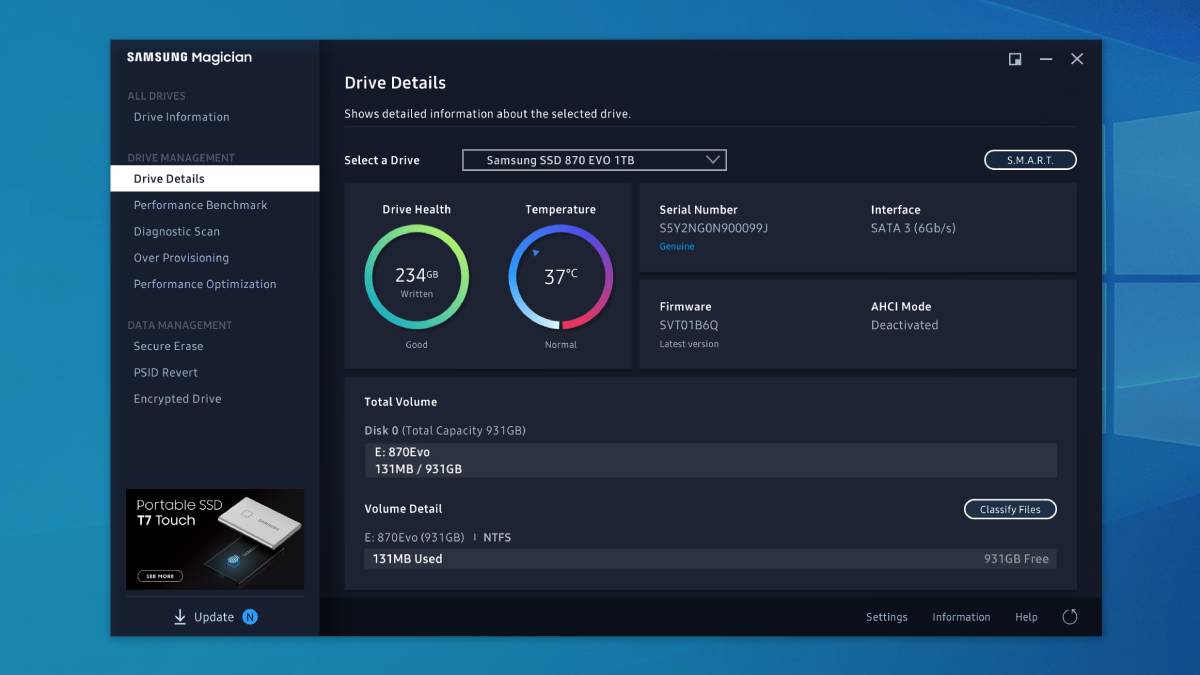 In terms of performance, there’s nothing that the Samsung SSD 870 Evo does better than its predecessor, the Samsung SSD 860, at least as far as what the average consumer will experience in everyday use. This release is purely about Samsung moving to newer tech and optimising its production. As a buyer, you’ll be just fine choosing whichever of these you find selling for less. The SSD 860 Evo is already disappearing from retail listings, but thankfully the newer SSD 870 Evo is not all that much more expensive.

Samsung’s official prices are Rs. 3,599 for 250GB; Rs. 5,999 for 500GB; Rs. 10,999 for 1TB; Rs. 21,999 for 2TB and Rs. 43,999 for 4TB. It’s good to see that the top-end capacities aren’t disproportionately more expensive. Also, for once, these numbers are actually pretty close to current street prices – usually, the two have no relation whatsoever. You’ll pay a few hundred rupees less online or at your local hardware shop, and do keep in mind that SSD prices fluctuate all the time.

You can get substantially less expensive 1TB SATA SSDs but these tend to ditch the DRAM cache and performance isn’t always in the same league. These days, even 1TB M.2 NVMe drives go on sale for less, and this option would offer far better bang for the buck. Samsung’s own SSD 970 Evo Plus is only slightly more expensive but is rated for seven times faster speeds . Hopefully, SSD 870 Evo prices prices will drift lower over time.

The SSD 870 Evo has a pretty limited market these days, but the higher capacity options will serve those who want a large secondary SSD for games and data, as well as those who have exhausted their motherboards’ M.2 slots already or who want to give an older PC new life. This is an excellent drive with top-notch features, but NVMe is the better option for those who can take advantage of it.