Notice: amp_is_available was called incorrectly. `amp_is_available()` (or `amp_is_request()`, formerly `is_amp_endpoint()`) was called too early and so it will not work properly. WordPress is currently doing the `pre_get_posts` hook. Calling this function before the `wp` action means it will not have access to `WP_Query` and the queried object to determine if it is an AMP response, thus neither the `amp_skip_post()` filter nor the AMP enabled toggle will be considered. It appears the theme with slug `publisher` is responsible; please contact the author. Please see Debugging in WordPress for more information. (This message was added in version 2.0.0.) in /home/runcloud/webapps/techilive/wp-includes/functions.php on line 5313
 Sanjeet gets gold, Panghal silver  - TechiLive.in 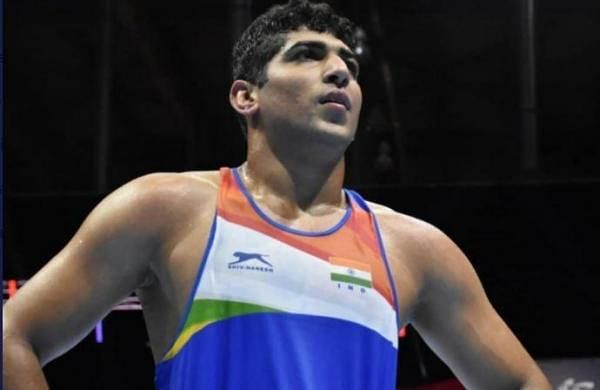 CHENNAI: After the end of the contest, Amit Panghal turned towards his corner and gave a double fist pump. After a strong finish in the final two rounds of the 52 kg final of the Asian Championships against arch-rival Shakhobidin Zoirov of Uzbekistan, it looked likely that the diminutive pugilist had unlocked the code against Zoirov, with whom he had lost twice in the past. He had thrown everything he had in his tank, putting Zoirov on the defensive on numerous occasions, especially in the closing period.

However, it was still not enough as he narrowly missed out on points, losing by a split verdict (3-2 in Zoirov’s favour). When the scores were later put up, it was clear that Panghal’s emotional gesture after the fight was not misplaced. He had, in fact, bagged the last two rounds, getting three (Rd 2: 10-9, 9-10, 9-10, 10-9, 10-9; Rd 3: 10-9, 9-10, 10-9, 9-10, 10-9) votes out of five on both the occasions. However, overall, it was not enough as he couldn’t get the votes from the right combination of right judges, thereby just missing out on gold. The Boxing Federation of India (BFI) had officially contested the verdict but the jury rejected it.

In a much-anticipated contest in Dubai, which was also a re-match of the 2019 World Championships final, both the fighters made explosive starts like wild cats fighting for territory. It was a high-quality affair with both the southpaw boxers exchanging some solid punches. But Zoiroz, entering the contest as a slight favourite based on past meetings, seemed to hold an edge over the Indian early on. The second round started in the same vein with Panghal, the shorter boxer of the two, landing some overhand punches and catching Zoirav off guard with his right on the follow-up. Panghal, who has been working on his close exchanges in recent times, seemed alert to maintain distance and continued to have Zoirov on his toes.

By the third round, Panghal had suffered a minor cut in his right eye, but that did not seem to distract him. The Asiad champ seemed to control the rhythm of the fight as Zoirov, the reigning world and Olympic champ, showed his mettle to withstand pressure. “It’s important to get the victory and show that Amit is capable of beating Zoirov. It’s an important fight psychologically. But the Olympics will be different,” Santiago Nieva, India men’s high performance director, had said on the eve of the fight. Panghal certainly showed what this fight means to him. He fell just short again. Hopefully, as Nieva says, the Olympics will be different.

Shiva Thapa (64kg) also suffered heartbreak, losing 2-3 against Baatarsukh Chinzorig of Mongolia in the final. The Olympian, who’s not part of the upcoming Olympics, had done well to reach the final.

Sanjeet (91 kg) shocked Rio Olympic silver medallist Vassiliy Levit to claim the top prize. The Kazakh veteran, who was seeking his fourth gold medal in the competition, seemed to be in disbelief with the final verdict (4-1 in Sanjeet’s favour). With this outcome, Sanjeet became the only male boxer from India to clinch gold in this edition of the continental event. India ended the campaign with 2 gold, 5 silver and 8 bronze medals overall.

Loading...
Denial of responsibility! TechiLive.in is an automatic aggregator around the global media. All the content are available free on Internet. We have just arranged it in one platform for educational purpose only. In each content, the hyperlink to the primary source is specified. All trademarks belong to their rightful owners, all materials to their authors. If you are the owner of the content and do not want us to publish your materials on our website, please contact us by email – admin@techilive.in. The content will be deleted within 24 hours.
amit panghalgoldnews updatePanghalSanjeetSilversports newssports update
0
Share

Peanut butter without worrying about the calories?

Reliance Jio working with SEGA to bring Sonic the Hedgehog 2, Streets of Rage 3 to its platform – Times of India