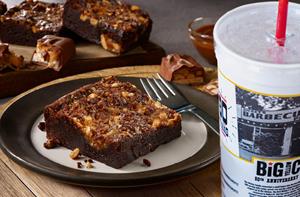 Dickey’s fans can indulge in the new Caramel Crunch Brownie made with SNICKERS as part of the Texas-style barbecue restaurant’s seasonal menu. In honor of its 80th anniversary and to celebrate its new menu item, Dickey’s is offering fans a special that includes a Pulled Pork Classic Sandwich, your choice of side and a Caramel Crunch Brownie made with SNICKERS for dessert, all for just $8.80. This limited-time item and meal will be available all summer long at participating Dickey’s locations.

“May is National Barbecue Month and there’s no better way to celebrate than with Dickey’s Legit. Texas. Barbecue™,” said Laura Rea Dickey, CEO of Dickey’s Barbecue Restaurants, Inc. “And now, guests can finish off their meal on a sweet note with our new dessert! It’s a chocolate lover’s dream. Our Summer of Family Favorites menu items have been a big hit, so we are confident this dessert will also quickly become a fan favorite.”

Earlier this year, Dickey’s kicked off its Summer of Family Favorites with the launch of its King’s HawaiianÒ Pulled Pork Sandwich with Dr PepperÒ Barbecue Sauce and Texas Sweet Corn. Only available for a limited-time, guests won’t want to miss out on the opportunity to try these tasty menu items.

Prior to the launch of the Summer of Family Favorites, Dickey’s transformed its iconic Big Yellow Cup into the Golden 80th Anniversary Big Yellow Cup Edition. Dickey’s will continue to release commemorative, limited-edition cups totaling six throughout the year to celebrate its 80th anniversary. Currently, its special throwback edition cup is available through June. Guests can visit any Dickey’s location and collect the limited-edition cups. All of the limited-edition cups will support The Dickey Foundation to provide financial opportunities, safety equipment such as helmets, shields, respiratory masks and overall support for local first responders.

Dickey’s Barbecue Restaurants, Inc., the world’s largest barbecue concept, was founded in 1941 by Travis Dickey. For the past 80 years, Dickey’s Barbecue Pit has served millions of guests Legit. Texas. Barbecue.™ At Dickey’s, all our barbecued meats are smoked onsite in a hickory wood burning pit. Dickey’s proudly believes there’s no shortcut to true barbecue and it’s why they never say bbq. The Dallas-based, family-run barbecue franchise offers several slow-smoked meats and wholesome sides with ‘No B.S. (Bad Stuff)’ included. The fast-casual concept has expanded worldwide with three international locations in the UAE, Singapore, and Tokyo and operates over 550 locations in 44 states. In 2016, Dickey’s won first place on Fast Casual’s “Top 100 Movers and Shakers” list and was named a Top 500 Franchise by Entrepreneur in 2018. Dickey’s Barbecue Pit has also been recognized by Fox News, Franchise Times, The Wall Street Journal, QSR Magazine, Forbes Magazine and Nation’s Restaurant News. For more information, visit www.dickeys.com.

Denial of responsibility! TechiLive.in is an automatic aggregator around the global media. All the content are available free on Internet. We have just arranged it in one platform for educational purpose only. In each content, the hyperlink to the primary source is specified. All trademarks belong to their rightful owners, all materials to their authors. If you are the owner of the content and do not want us to publish your materials on our website, please contact us by email – [email protected]. The content will be deleted within 24 hours.
additionBarbecuebarbequeBBQDickey'sDickey's BarbecueDickey's Barbecue PitDickey's Barbecue Restaurants
Share

23 Russians allowed to compete as neutrals