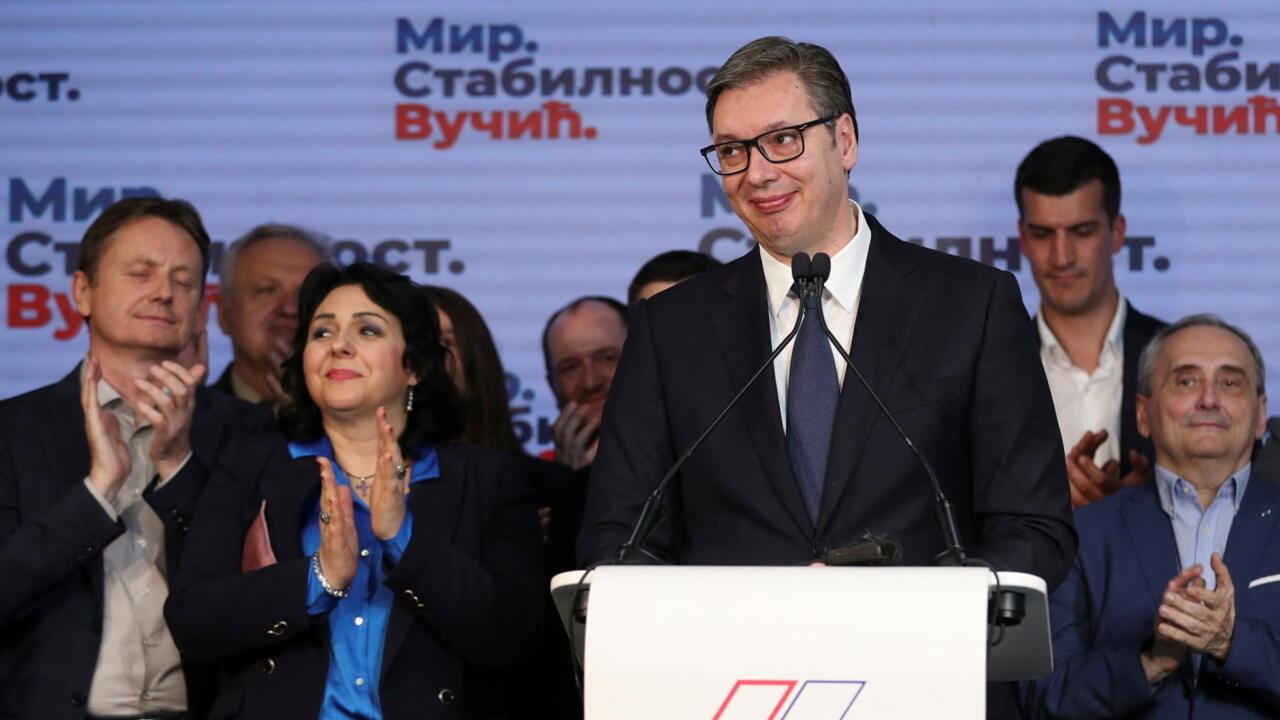 Serbia’s leader Aleksandar Vucic claimed a landslide victory in general elections Sunday paving the way for another term as president and extending his decade-long rule in the Balkan nation.

“I have won 2,245,000 votes in the first round, that is the first round,” Vucic announced during a televised victory speech, saying he secured roughly 60 percent of the vote.

“Personally, I see stable progress and I voted in accordance with this opinion,” Milovan Krstic, a 52-year-old government employee, told AFP after casting his vote in Belgrade.

Russia’s invasion of Ukraine has cast a long shadow over a contest that observers had earlier predicted would focus on environmental issues, corruption and rights.

Vucic has deftly used the return of war in Europe along with the coronavirus pandemic to his advantage, promising voters continued stability amid uncertain headwinds.

“We expect a huge victory. That’s what we worked for in the past four or five years, and we believe we will continue with the great efforts and the development of this country,” the president said after casting his ballot early Sunday.

Serbia’s leading opposition candidate Zdravko Ponos said he hoped the contest would offer a path to institute “serious change” in the country.

“I hope for a bright future. Elections are the right way to change the situation. I hope the citizens of Serbia will take the chance today,” said Ponos.

In the capital Belgrade, the elections were briefly marred by scuffles between parliamentary candidate Pavle Grbovic and supporters of Vucic’s SNS, along with scattered reports of small skirmishes and voter intimidation.

The country’s election commission predicted voter turnout would likely hover around 60 percent, nearly a 10-point jump from the last general elections in 2020.

Serbs from the former breakaway province of Kosovo also participated in the contest and boarded around 40 buses headed north to vote, after authorities in Pristina refused to allow polling centres on its soil.

Only a few months ago, the opposition seemed to have gained momentum.

In January, Vucic axed a controversial lithium mine project following mass protests that saw tens of thousands take to the streets.

The move was a rare defeat for Vucic, who has rotated through a range of positions, including prime minister, president and deputy premier along with a stint as the defence chief during a decade in power.

The polls predict he will win again on Sunday even as the opposition hopes a high turnout could force a run-off.

Analysts, however, say the opposition has little chance of dethroning Vucic or eating away at his parliamentary coalition, which holds a lion’s share of the seats.

The president has also carefully managed the country’s response to the war in Ukraine by officially condemning Russia at the United Nations but stopping short of sanctioning Moscow at home, where many Serbs hold a favourable view of the Kremlin.

The opposition in turn has largely refrained from attacking Vucic’s position on the conflict, fearing any call for harsher measures against Russia would backfire at the ballot box.

Vucic also headed into elections with a plethora of other advantages.

Following a decade at the helm, he has increasingly tightened his grip over the various levers of power, including de facto control over much of the media and government services.

In the months leading up to the campaign, the president rolled out a range of financial aid offers to select groups, prompting critics to say he was trying to “buy” votes before the contest.

Denial of responsibility! TechiLive.in is an automatic aggregator around the global media. All the content are available free on Internet. We have just arranged it in one platform for educational purpose only. In each content, the hyperlink to the primary source is specified. All trademarks belong to their rightful owners, all materials to their authors. If you are the owner of the content and do not want us to publish your materials on our website, please contact us by email – [email protected]. The content will be deleted within 24 hours.
aleksandar vucicdeclareselectionElectionsEuropeHealth newsHealth updateIncumbent
Share

Review: French comedy ‘The Rose Maker’ is a buoyant romp

Wimbledon 2022: No Russians, no rankings, but Serena is back

6 Popular Myths About Instructor-Led Training And The…