Notice: amp_is_available was called incorrectly. `amp_is_available()` (or `amp_is_request()`, formerly `is_amp_endpoint()`) was called too early and so it will not work properly. WordPress is currently doing the `pre_get_posts` hook. Calling this function before the `wp` action means it will not have access to `WP_Query` and the queried object to determine if it is an AMP response, thus neither the `amp_skip_post()` filter nor the AMP enabled toggle will be considered. It appears the theme with slug `publisher` is responsible; please contact the author. Please see Debugging in WordPress for more information. (This message was added in version 2.0.0.) in /home/runcloud/webapps/techilive/wp-includes/functions.php on line 5313
 Serena Williams' 1000th match ends in defeat at Italian Open - TechiLive.in 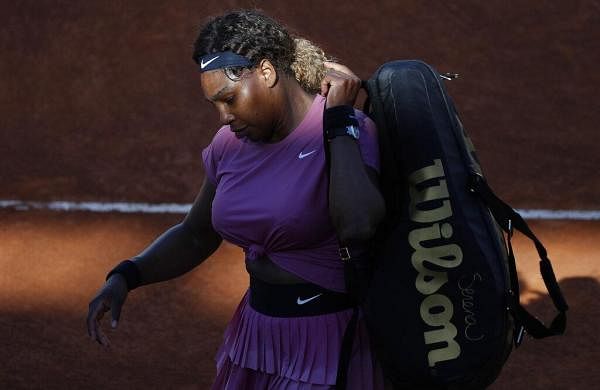 ROME: Serena Williams’ 1,000th tour-level singles match ended in defeat as she marked her return to action with a 7-6 (6) 7-5 loss to Nadia Podoroska in the second round of the Italian Open.

The eighth-seeded Williams, who hadn’t played since the Australian Open, rallied from a break down twice in the opening set on Wednesday and saved the first three set points she faced in the tiebreaker before Podoroska converted her fourth.

The Argentine went on to win in 1 hour, 58 minutes.

“It’s tough to have a first match on clay. It was definitely kind of good to go the distance and to try to be out there, but clearly I can do legions better,” said Williams, who has won the Italian Open four times.

“Maybe I do need a few more matches, so I’m going to try to figure that out with my coach and my team and see what we would like to do. I have been training for months, but it feels definitely different on clay to make that last adjustment.”

The 24-year-old Podoroska took a 5-2 lead in the second set but was broken at love the first time she tried to serve out the match.

She broke Williams again in the 12th game to seal her third career win over a top-10 player.

“It’s special win. She’s a great athlete. She did too many things for our sport. It’s history,” Podoroska said.

“So for me it’s very special. But most of all, I’m happy the way I played. I felt again comfortable on clay, on my game, and that’s most important for me.”

Defending champion Simona Halep was forced to retire with a left calf injury in the second set of her match against fellow former No.1 Angelique Kerber. The third-seeded Halep was leading 6-1 3-3 before her injury.

Second-seeded Naomi Osaka is also out after losing 7-6 (2) 6-2 to Jessica Pegula of the United States.

In the men’s tournament, Rafael Nadal held off a strong challenge from local teenager Jannik Sinner to prevail 7-5 6-4.

Denial of responsibility! TechiLive.in is an automatic aggregator around the global media. All the content are available free on Internet. We have just arranged it in one platform for educational purpose only. In each content, the hyperlink to the primary source is specified. All trademarks belong to their rightful owners, all materials to their authors. If you are the owner of the content and do not want us to publish your materials on our website, please contact us by email – admin@techilive.in. The content will be deleted within 24 hours.
defeatendsItalianmatchnews updateOpenSerenaSerena Williams
0
Share

Protest over denying opportunity to a Paralympic champion

He’s a Dogecoin Millionaire. And He’s Not Selling.