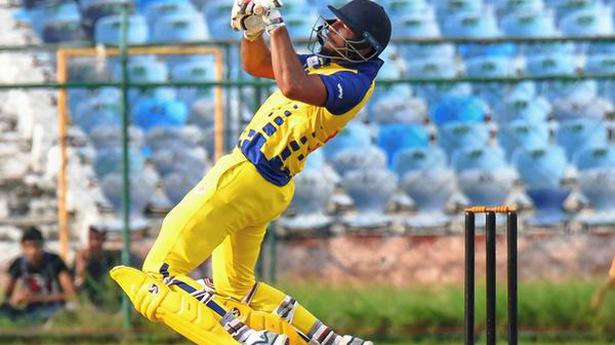 The eye of a tiger and the calmness of a monk; qualities of a finisher.

The finisher is a rare breed. He does not receive too many balls to face, has to strike almost immediately after sauntering in, take the game deeper, and deliver the decisive, sledge-hammer blow.

As Shahrukh Khan said to The Hindu, “When they [the bowlers] miss, I hit them out of the park.’

It’s a role that requires nerve and courage; breaking through the small window that the game offers during the climactic stages.

Shahrukh has a swagger as he walks to the crease. And then he pulls off heists.

When Karnataka seamer Prateek Jain ran in for the final ball of the 20th over, what was going through Shahrukh’s mind?

A four for a Super Over and [since a five is improbable] a six for a title triumph in the Syed Mushtaq Ali championship final. The stakes were high.

“I kept my mind blank. A finisher has to keep things simple. But I wanted to hit a six for a win,” revealed the 26-year-old Shahrukh.

Prateek sent down a leg-stump yorker. “The good thing was I was able to get my right leg out of the way immediately to free my arms.”

He added, “Initially I wanted to hit over long on, then I chose to go over square-leg. The moment I connected I knew it was a six.”

Shahrukh said, “A finisher needs to get into the zone. Have belief in his ability to complete the job. Trust his partner. Target a particular bowler.”

He elaborated, “A finisher’s vision has to be confined to within the ground. Anything outside the arena is a distraction.”

The Tamil Nadu lad, who grew up watching great finishers such as Michael Bevan, Michael Hussey and M.S. Dhoni, admiring them for both skills and on-field behaviour, practises range hitting to send the ball further and stronger.

He was picked last season by Punjab Kings for a whopping ₹5.25 crore; he won a game too as a finisher against Kolkata Knight Riders.

“I am fortunate that my State team too has given me the role of a finisher,” he acknowledged.

Shahrukh imbibed much from his IPL experience and became close to Wasim Jaffer [in the support staff] and West Indian players Fabian Allen and Nicholas Pooran.

In the Tamil Nadu team, Shahrukh shares a special bond with assistant coach R. Prasanna. “He has helped me metally and in the technical aspects. He is really close to me.”

This game-changing Shahrukh reserves his best for the end with brutal blows. He’s a feared finisher.

Denial of responsibility! TechiLive.in is an automatic aggregator around the global media. All the content are available free on Internet. We have just arranged it in one platform for educational purpose only. In each content, the hyperlink to the primary source is specified. All trademarks belong to their rightful owners, all materials to their authors. If you are the owner of the content and do not want us to publish your materials on our website, please contact us by email – [email protected]. The content will be deleted within 24 hours.
cricket newscricket news livecricket resultsExcellencefinishernews updateParShahrukh
Share