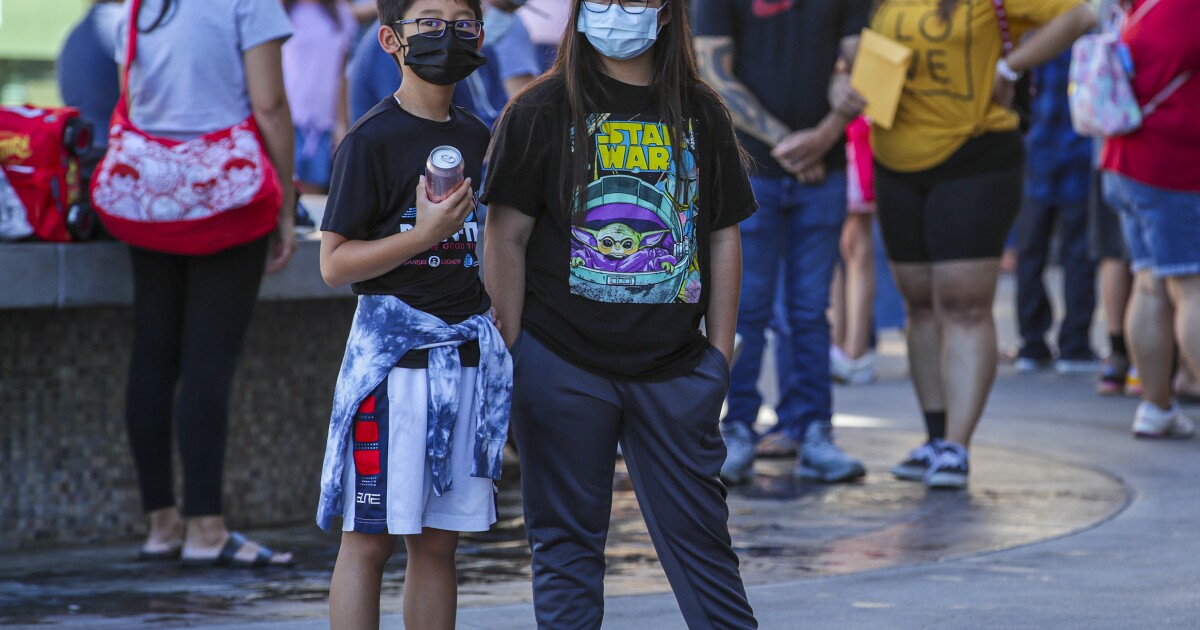 While watching “Shang-Chi and the Legend of the Ten Rings” — Marvel’s latest superhero spectacle about a retired assassin who comes out of hiding to protect a mythical village from vicious, soul-sucking monsters — 17-year-old Daniel Ho was reminded of his grandmother’s house.

When not dangling from skyscrapers in Macau or speeding through the busy streets of San Francisco, the film’s predominantly Asian characters spend the occasional quiet moment visiting “incense stations to remember the dead,” Ho observed Saturday during a private screening of the tentpole epic.

“I see those when I go over to my grandma’s,” he said. “It’s very cool to see all the Asian culture represented in the film.”

Daniel Ho and his 11-year-old brother, Russell, were among more than 125 kids and chaperones who attended an opening-weekend showing of “Shang-Chi” at an AMC theater in Monterey Park, courtesy of the Boys & Girls Club of West San Gabriel Valley.

The complimentary event was sponsored by the “Shang-Chi” Challenge, a GoFundMe campaign launched by POC Culture Editor in Chief Ron Han in an effort to give kids from his hometown a chance to see Marvel’s first leading superhero of Asian descent on the big screen.

“I hope that Asian American kids … can see themselves in the biggest franchise in the world as leads, as heroes, as multifaceted, layered people,” Han told The Times. “That’s really important.”

“Shang-Chi and the Legend of the Ten Rings” stars Canadian actor Simu Liu as a Chinese warrior turned San Francisco valet driver who embarks on a daring homeward journey under the impression that his younger sister (played by newcomer Meng’er Zhang) is in imminent danger of being attacked by their estranged father (screen icon Tony Leung), bearer of the magical 10 rings.

One Boys & Girls Club member who saw himself reflected onscreen in Liu’s eponymous protagonist was Ho, who came for the dynamic martial arts sequences and stayed for the visual nods to Asian American identity — such as a suspenseful bus-chase scene partly set in San Francisco’s Chinatown.

“I liked Shang-Chi because I relate to him,” he said. “I’m the older brother of the family, and I really agree with his family values. … He’s a very good character.”

Asked if the Marvel Cinematic Universe’s newest superhero reminded him of his big brother, Russell Ho responded with a swift and firm “No” — rivaling the impeccable comedic timing of his own favorite “Shang-Chi” character, Katy, played by rising movie and TV star Awkwafina.

Awkwafina’s key role in the film — as Shang-Chi’s loyal and wise-cracking best friend — was also a major draw for 15-year-old Kelly Hu, whose family and friends fell in love with the rapper turned actor while viewing “Crazy Rich Asians” on repeat after the groundbreaking rom-com hit theaters in 2018.

“I personally am not that big of a Marvel fan, but I think it’s really cool that … there’s more Asian representation in this movie,” said Hu, the lucky raffle winner of a “Shang-Chi” Funko Pop signed by cast member Andy Le and director Destin Daniel Cretton. “My parents were also excited [to see] some Asian actors.”

Pleased to see so many local families in the audience was Cretton, who made a surprise appearance at this weekend’s event and briefly addressed the enthusiastic crowd before the lights dimmed in the theater.

“As a kid, there can be a temptation to try to change who you are in order to fit in, to keep yourself from being bullied — to try to shift your dress a certain way or act a certain way,” the filmmaker said in his speech.

“It took me a long time to get to a place where I was able to look in the mirror and be happy with who I was. And that is, to me, the biggest superpower … looking at yourself and seeing all the imperfections, all the good, all the weaknesses, the strengths, the things that people tease you about, the things that people praise you about, and learning to just embrace it all. And that’s what you will see Shang-Chi do over the course of this movie, and I hope it’s something that we can all carry with us.”

Also in attendance was Le, an actor and martial artist from Orange County who appears in the Disney blockbuster as Death Dealer, a mysterious masked ninja who frequently spars with Shang-Chi and company throughout the film.

To give the Boys & Girls Club a special sneak peek of the movie’s action-packed fight sequences, Le performed a series of high-flying stunts ahead of the screening, eliciting plenty of awestruck gasps from the rapt moviegoers.

“I got bullied a lot [growing up]. … I feel like my forehead had ‘pick on me’” written on it, said Le, who became enamored with martial arts at a young age and encouraged the Boys & Girls Club members to pursue their dreams.

“Watching Jackie Chan films, Bruce Lee films — watching these martial arts heroes standing up to the bullies, standing up to the bad guys — when you’re a kid, that does something to you, and you feel a sense of empowerment. … I knew that I wanted to be just like the heroes that I saw on screen.”

For many young beneficiaries of the “Shang-Chi” Challenge, Saturday’s feature presentation marked their first trip to the cinema since the beginning of the coronavirus crisis. Unlike all of Disney’s previous pandemic-era releases, “Shang-Chi” is playing exclusively in theaters for 45 days before arriving on Disney+.

“It feels really good actually having the [movie theater] experience again instead of just watching it from home,” said 12-year-old Brianna Troncoso.

“The movie’s much more powerful on a big screen,” echoed Daniel Ho. “You’re sitting with everyone else enjoying it, and you’re more immersed in the movie rather than at home. … It’s really enjoyable to come back again.”

As of Sunday, “Shang-Chi” had already broken the all-time Labor Day weekend record, on pace to gross more than $80 million over four days.

The “Shang-Chi” challenge has also been a resounding success, meeting its initial fundraising goal of $10,000 in just three days. That amount has since doubled, allowing the Boys & Girls Club to host an additional screening next weekend, as well as a couple of in-house viewing parties once the film becomes available on Disney+.

“It’s so overwhelming, and I’m definitely appreciative of the community support,” Han said. “At the same time, I’m not surprised. I think it is a reflection of the excitement and enthusiasm and passion that the Asian American community has about this film [and], in general, about being seen and represented in U.S. media, which traditionally has not represented our community well.”

Before seeing “Shang-Chi” for the first time at the film’s Los Angeles premiere, Han admittedly suffered from a case of the so-called representation sweats — afraid the historic project might fail to meet its lofty expectations. But Saturday, he wore his “Shang-Chi” T-shirt with pride as he prepared to screen the MCU blockbuster for hundreds of children — including his own daughter.

Loading...
Denial of responsibility! TechiLive.in is an automatic aggregator around the global media. All the content are available free on Internet. We have just arranged it in one platform for educational purpose only. In each content, the hyperlink to the primary source is specified. All trademarks belong to their rightful owners, all materials to their authors. If you are the owner of the content and do not want us to publish your materials on our website, please contact us by email – [email protected]. The content will be deleted within 24 hours.
Challengechanceentertainment newsEntertainment updatefeelGabrielKidsnews update
Share