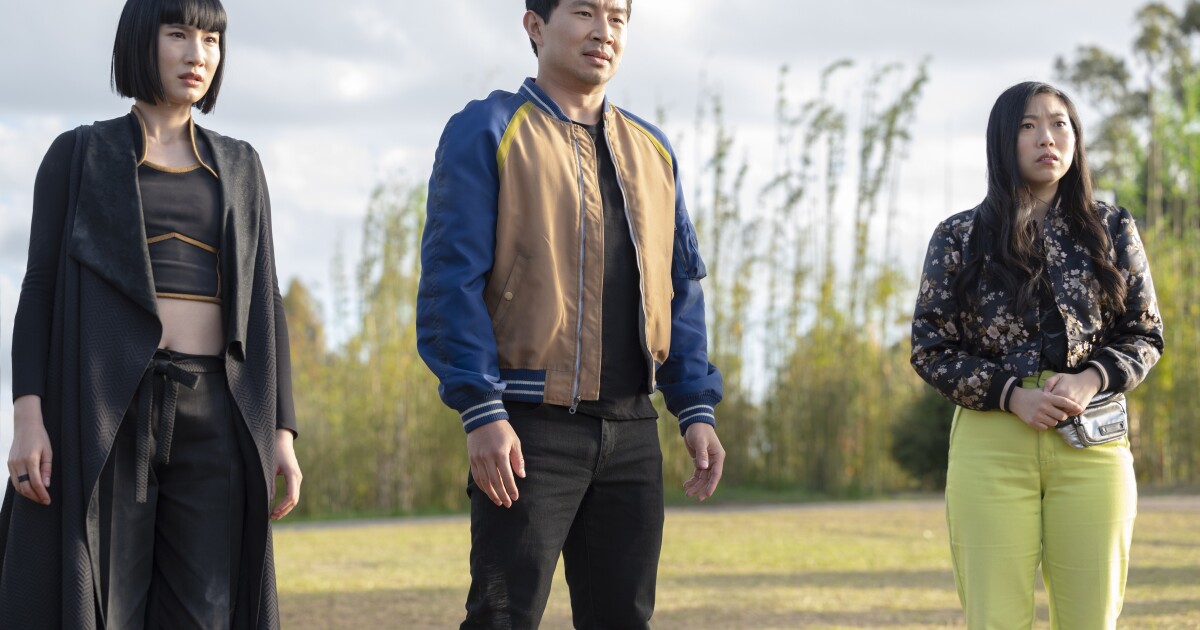 Warning: This article contains spoilers for the final scenes of Marvel’s “Shang-Chi and the Legend of the Ten Rings.” For non-spoilery content, check out our review and feature on the movie’s origins.

“Shang-Chi and the Legend of the Ten Rings,” the second film in the Marvel Cinematic Universe’s highly-anticipated Phase Four, offers a cryptic glimpse at what’s to come in the post-Infinity Saga MCU via not one but two intriguing post-credits scenes.

The film ends with Wong (Benedict Wong) interrupting Shang-Chi (Simu Liu) and Katy (Awkwafina) at dinner, summoning them (presumably) to the Bleeker Street sanctum he shares with Doctor Strange. A mid-credits scene offers a quick glimpse at the newly-minted heroes convening with veteran Avengers Bruce Banner (Mark Ruffalo) and Captain Marvel (Brie Larson) to speculate about the origins of the titular rings.

Besides establishing some of the top-ranking Avengers who are still active following the losses of “Avengers: Endgame,” the scene also reveals that the rings (bracelets, really) are emitting a mysterious beacon that might be key to a larger arc of Phase Four. (The scene also hints that Katy could have an increased presence in upcoming “Shang-Chi” installments, considering she’s the first superhero sidekick to be granted a seat at the adults’ table).

The Mandarin’s rings in the comics are drastically different from the ones depicted in the film. For one thing, they were worn on his fingers rather than the thick metal bangles adorning Tony Leung’s forearms. “In the comics, the rings were actually finger rings and have really different powers, are kind of kooky and they came from a spaceship,” the film’s co-writer Dave Callaham told Times reporter Jen Yamato. “I can’t tell you what they’re made out of because that’s a story for another day. They are mystical and magical and they do a lot of amazing things.”

In the comics, the rings are of Makluan origin, a shape-shifting cosmic species of space dragons (villain Fin Fang Foom is perhaps the best-known Makluan character and could be introduced in an upcoming movie. There was an Easter egg bearing the character in 2008’s “Iron Man”).

They are also known as the “Ten Realm Rings,” which neatly sets up potential Thor and Loki involvement; the realms were mentioned in both “Thor: The Dark World” and the Disney+ “Loki” series. Since the upcoming “Doctor Strange in the Multiverse of Madness” and “Spider-Man: No Way Home” both seem to be continuing down the multiverse thread introduced in “Spider-Man: Far From Home” (and expounded upon in “Loki”), it’s safe to say this next phase of the MCU will be more of the space than hat variety.

Following the credits is an additional teaser scene featuring Shang-Chi’s sister Xialing in the middle of some pretty extensive renovations of their late father’s compound. After her underground fight club suffered damage in the brawl against her father’s forces, it’s only right for Xialing to seize command of the Ten Rings army — and allow women to join the forces too. What exactly she’ll do with that army remains an open question.

Equally notable is the tag that confirms that “The Ten Rings will return,” rather than Shang-Chi. While a sequel has not yet been confirmed, it’s all but guaranteed that the character will be back in an upcoming Marvel film. Whether it’s another solo outing remains to be determined by how the film does at the box office.

Denial of responsibility! TechiLive.in is an automatic aggregator around the global media. All the content are available free on Internet. We have just arranged it in one platform for educational purpose only. In each content, the hyperlink to the primary source is specified. All trademarks belong to their rightful owners, all materials to their authors. If you are the owner of the content and do not want us to publish your materials on our website, please contact us by email – [email protected]. The content will be deleted within 24 hours.
entertainment newsEntertainment updateExplainedMarvelsnews updatephasePostCreditsScenes
Share

Fall Travel Trends: Have You Heard of ‘Trip Stacking?’ (You Will.)