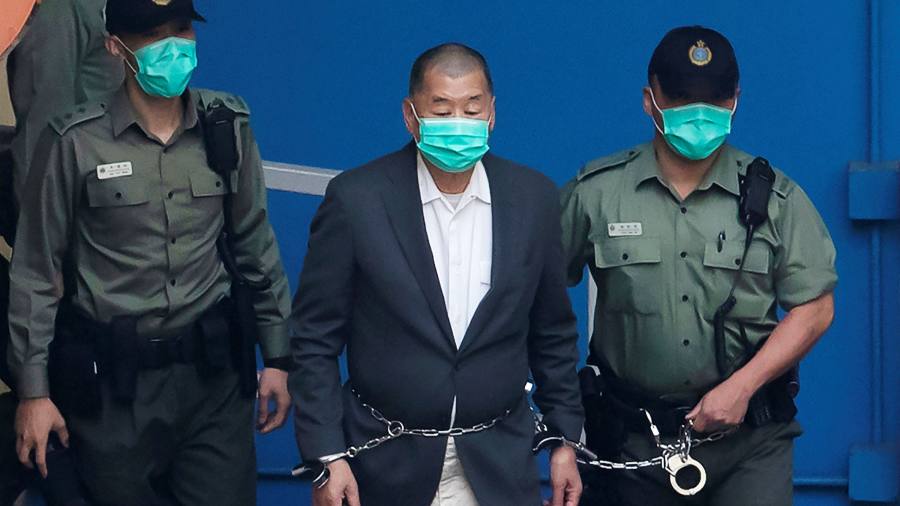 Shares in the Hong Kong media company controlled by Jimmy Lai surged by 330 per cent as they resumed trading after authorities froze the jailed pro-democracy tycoon’s assets under a controversial national security law.

Hong Kong-listed Next Digital owns tabloid newspaper Apple Daily, which angered the city’s government over its role in covering pro-democracy demonstrations in 2019. Lai is in prison for his participation in the protests and faces other charges including conspiracy to collude with foreign forces under the Hong Kong security law.

Shares in Next Digital later trimmed gains in Thursday trading to be 96 per cent higher.

Dickie Wong, research director at Hong Kong brokerage Kingston Securities, said the jump was likely due to Apple Daily supporters buying the stock and was unrelated to the health of the business.

“Obviously from the buy side the momentum is very strong . . . some of the people from the ‘yellow’ side may support this company,” Wong said, referring to Hong Kong’s pro-democracy movement, whose members are known for wearing yellow ribbons.

Next Digital’s shares have been extremely volatile throughout Lai’s legal woes. In August, the stock nearly tripled after the billionaire was arrested for allegedly breaching the national security law and Apple Daily’s office was raided. Supporters piled into the shares in a display of solidarity.

As a result, police arrested 15 people in September on charges of conspiracy to defraud and money laundering, alleging that some of those detained had manipulated Next’s share price.

Apple Daily has faced financial difficulties due to the pandemic and concerns that authorities will eventually force the newspaper to close. It has also halted the print edition of its Taiwan edition.

Earlier this month, the Hong Kong government froze Lai’s shares in Next Digital, as well as the bank accounts of three companies he owns. That prompted a halt in trading of the group’s shares.

The development marked the first time the national security law, imposed by Beijing last year, has been used against a majority investor in a listed company.

Lai holds 71 per cent of Next Digital, a stake worth about HK$350m (US$45m). He has also made a number of significant loans to the company.

Trading in the shares resumed after Next Digital said late on Wednesday that it was in discussions with its auditors and it had working capital sufficient for at least 16 months from June. The company added that it met the 25 per cent public float requirement under the stock exchange’s listing rules.

Senior pro-Beijing voices in Hong Kong are continuing to put pressure on the company.

CY Leung, the city’s former leader, said in a Facebook post on Wednesday that Next Digital’s management was being “negligent”, “irresponsible” and “misleading” to say that the operation and financial health of the group remained unaffected by the freezing of Lai’s assets.

Leung, who suggested he was a minor shareholder of Next Digital, added that he had complained to financial regulators about the group’s comments.

Loading...
Denial of responsibility! TechiLive.in is an automatic aggregator around the global media. All the content are available free on Internet. We have just arranged it in one platform for educational purpose only. In each content, the hyperlink to the primary source is specified. All trademarks belong to their rightful owners, all materials to their authors. If you are the owner of the content and do not want us to publish your materials on our website, please contact us by email – [email protected]. The content will be deleted within 24 hours.
Education newsEducation updateGroupHongJimmyKongLaisMedia
0
Share