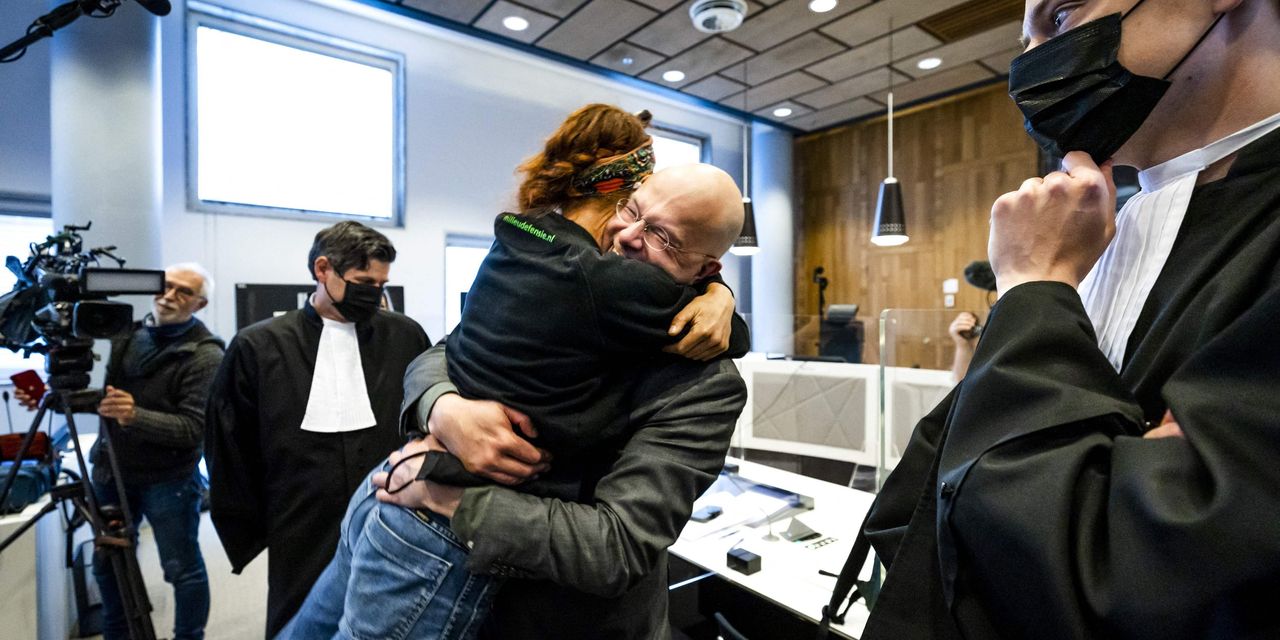 The ruling, issued by the district court in The Hague and stemming from a lawsuit brought by environmental groups, found Shell must curb its carbon emissions by 45% by 2030, compared with 2019 levels. This is in line with United Nations guidance for member states aimed at preventing global temperatures rising more than 1.5 degrees Celsius above preindustrial levels.

Lawyers and consultants said the ruling could set a precedent in other Western jurisdictions, particularly in Europe, opening oil companies to new legal jeopardy over their carbon emissions. Companies in other heavy polluting industries could also face greater environmental scrutiny, they added.

“This case does open the door for challenges to other energy-intensive sectors,” said Liz Hypes, an analyst at risk consultancy Verisk Maplecroft. Other industries that could face lawsuits include agriculture, transport and mining, all of which are already being targeted by regulators and civil society over their emissions, Ms. Hypes added.

The civil suit against Shell was led by the Dutch arm of Friends of the Earth, an environmental nonprofit. It alleged Shell’s production of oil and natural gas contributed to climate change, violating a so-called duty of care to those affected by it and failing to meet the company’s human-rights obligations.

Rather than seek damages, the nonprofit asked the court to force Shell to reduce its carbon emissions. Shell’s current emissions-reduction targets are based on intensity—the amount of carbon in any unit of energy—that could see its overall emissions still rise.

The court said that Shell wasn’t in breach of its obligation to reduce carbon emissions, but that there was an “imminent breach” and therefore set the reduction requirement. It said its ruling covered the emissions of the company’s own operations and also those of its suppliers and customers.

Should Shell and other oil companies be held responsible for their contribution to climate change? Why or why not? Join the conversation below.

The court didn’t stipulate how the ordered reductions should be met, or how it might monitor or enforce its ruling.

The environmental activists brought the case in The Hague because that is home to one of Shell’s dual headquarters, where they say corporate policy is decided.

Shell had argued in the case that climate change is a broader societal issue, and that it wasn’t appropriate to ask an individual private party to reduce its carbon emissions.

The company said Wednesday that it was disappointed with the ruling and that it expected to appeal. If Shell pursues it, the case may be referred to a court of appeal where it can take around one to two years to be heard, after which it can be appealed in the supreme court.

Shell said it was investing billions of dollars in low-carbon energy, including electric-vehicle charging, biofuels and renewables. “We want to grow demand for these products and scale up our new energy businesses even more quickly,” a Shell spokesman said.

The case comes as oil companies face growing scrutiny over their carbon emissions. Activists have long accused the industry of contributing to global warming, alleging the burning of the fossil fuels they produce and sell is contributing to man-made climate change. The industry argues it has a responsibility to produce the oil and natural gas that the world needs.

More recently, governments and shareholders have also ratcheted up the pressure on the industry. Elsewhere on Wednesday, an activist investor won at least two seats on the board of

in a historic defeat for the oil giant that will likely force it to alter its climate strategy.

Several major oil companies have set out plans to reduce their production of fossil fuels, invest more in renewable energy and cut carbon emissions. Shell earlier this year said it would gradually reduce its oil output and expand in electricity and biofuels, while reducing the carbon intensity of the energy products it sells by 20% by 2030 and 100% by 2050.

Seeking an endorsement of that plan, Shell last week held an industry-first shareholder vote on its energy-transition strategy, which was approved by around 89% of investors.

However, a separate additional resolution calling for Shell to make more ambitious low-carbon investments and carbon-emissions reductions was supported by about 30% of shareholders. Support for the resolution, put forward by Follow This, a group of more than 6,000 shareholders in oil companies, was roughly double that of a similar resolution last year.

Environmental groups welcomed Wednesday’s ruling. “This case is unique, because it is the first time a judge has ordered a large polluting company to comply with the Paris Climate Agreement,” said Roger Cox, lawyer for Friends of the Earth Netherlands.

The case built on a ruling from the Netherlands supreme court in December 2019 that said the government needed to do more to prevent climate change. That case, brought by climate activist group the Urgenda Foundation, resulted in the government being ordered to reduce greenhouse-gas emissions by 25% by 2020, from 1990 levels. The government had previously targeted a 17% reduction, which the court said was insufficient to meet U.N. climate goals.

Under the 2015 Paris climate accord, which the U.S. rejoined earlier this year, governments agreed to limit global temperature rises to 2 degrees Celsius above preindustrial levels, with an ambition of 1.5 degrees.

“This judgment will not only send shivers down the collective spines of the oil industry, but of all the other industries that significantly contribute to the greenhouse gases,” said Martyn Day, a lawyer at Leigh Day, a London-based law firm that has been involved in other pollution cases against Shell.

Denial of responsibility! TechiLive.in is an automatic aggregator around the global media. All the content are available free on Internet. We have just arranged it in one platform for educational purpose only. In each content, the hyperlink to the primary source is specified. All trademarks belong to their rightful owners, all materials to their authors. If you are the owner of the content and do not want us to publish your materials on our website, please contact us by email – [email protected]. The content will be deleted within 24 hours.
Air pollutionC&E Executive News FilterC&E Industry News FilterCarbonClimate changeContent Typescorporatecorporate crime
0
Share