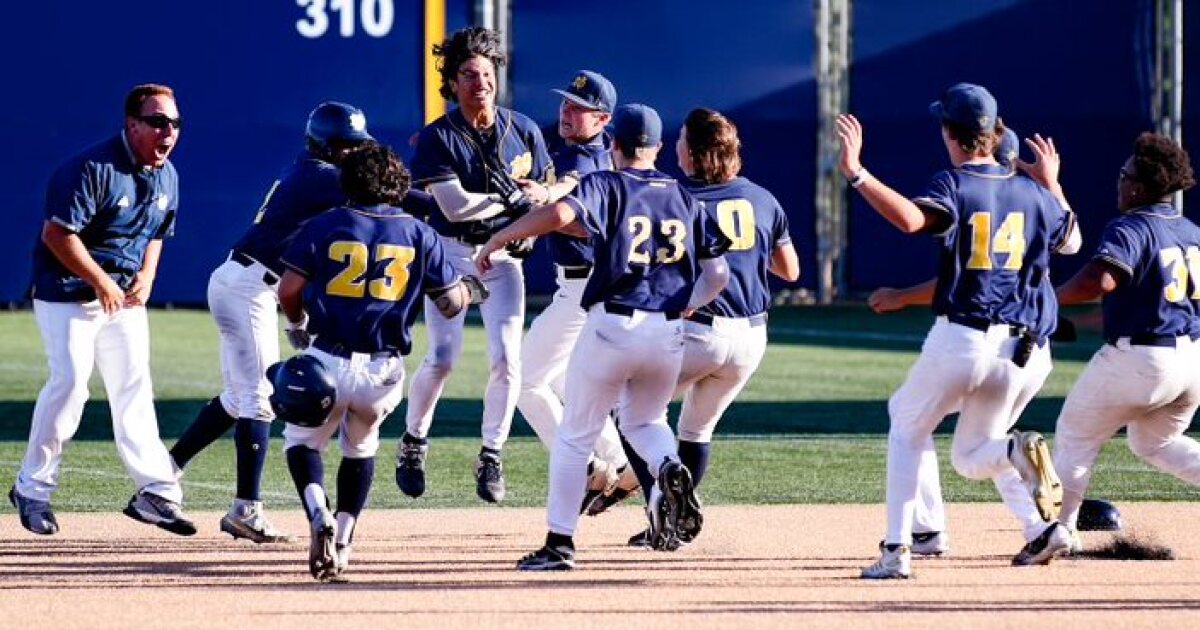 Brandon Gonzaga looked up to third base coach Randy Thompson on Friday afternoon in the bottom of the eighth inning of an already wild Southern Section Division 1 baseball playoff game at Sherman Oaks Notre Dame. The bases were loaded, the count was 2-and-1, there were two outs, and nobody in his right mind would consider bunting, right?

“Coach Thompson and I have been on the same page all year,” Gonzaga said. “He trusts me with the bunt, and I trust myself. He gave me the sign, but I already knew if I could put it in the right spot, game over.”

Gonzaga put down the bunt toward third base, leaving Orange Lutheran pitcher Louis Rodriguez with no play as the winning run crossed home plate. Notre Dame pulled out a 5-4 victory over the top-seeded Lancers to advance to Tuesday’s semifinals against Huntington Beach. Huntington Beach defeated Foothill 12-5.

“It was a great bunt,” Orange Lutheran coach Eric Borba said. “You could not have rolled it out any better.”

Orange Lutheran never considered the possibility Gonzaga could get a bunt down against Rodriguez. During the game, Notre Dame had failed six times to put down bunts.

“We were due,” Thompson said.

The fact Notre Dame could recover after what happened in the top of seventh was even more surprising. Cole Clark threw six scoreless innings. Notre Dame held a 4-0 lead, but Clark left after throwing 100 pitches. Enter Diego Herrera. He got the first batter out, but Jacob Pereda and Derek Curiel followed with singles. Karson Bowen drove in the Lancers’ first run with a sacrifice fly. When Mikey Romero drew a walk, Casey Borba came to the plate representing the tying run.

Borba barely was able to survive twice on two-strike pitches, fouling off the ball. The count reached 3-and-2. He proceeded to hit the ball over the left-field fence for a tying three-run home run. Borba, a junior, is the son of the head coach.

Momentum switched to the Lancers.

“That was heart-wrenching,” Clark said of watching the rally unfold from the dugout.

Zack Romero came in and was able to end the inning, then threw a scoreless eighth, allowing Notre Dame to take a deep breath.

In the bottom of the eighth, Ryan Limerick led off with a single, then Anthony Reveles walked. The next batter struck out after failing to bunt. After a groundout put runners on second and third, Dean West was intentionally walked to load the bases for Gonzaga.

Cole doesn’t even know the bunt sign for Notre Dame, so when he saw Gonzaga bunt, he was as shocked as the overflow crowd.

“Nobody expected a drag bunt,” he said. “Brandon came up clutch.”

The other semifinal Tuesday will have JSerra at Villa Park. JSerra broke a tie in the sixth with home runs from Andrew Lamb and Trent Caraway to defeat defending champion Harvard-Westlake 6-1. Villa Park received three hits from Gavin Grahovac, including a two-run home run, to beat Cypress 4-2.

Denial of responsibility! TechiLive.in is an automatic aggregator around the global media. All the content are available free on Internet. We have just arranged it in one platform for educational purpose only. In each content, the hyperlink to the primary source is specified. All trademarks belong to their rightful owners, all materials to their authors. If you are the owner of the content and do not want us to publish your materials on our website, please contact us by email – [email protected]. The content will be deleted within 24 hours.
BuntDameEliminateLutherannews updateNotreOaksOrange
0
Share

apple: More than 15 lakh apps may be removed by Apple and Google, here’s why – Times of India

Future Of Arma Livestream Scheduled For Next Week