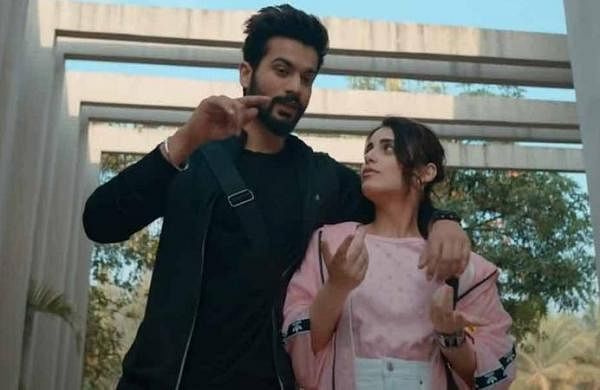 In Shiddat, after 50 minutes of characters driving each other up the wall, the film finally drops the DDLJ reference. Soon-to-be married Kartika (Radhika Madan) tells casual fling Jaggi (Sunny Kaushal) that if he still feels the same way about her after three months, and can show up at her nuptials in London, she’ll cancel her wedding. Is she serious? Will Kartika, who at the outset says there’s more to marriage than love, make good on her promise? To me, it just seems like a way to shake off a pushy date.

A not-so-effective way. Shiddat is the sort of movie where everyone — especially its self-willed lead character — takes things literally. We first meet Jaggi at a wedding, not his own but someone else’s, where the groom is giving a speech about crossing all borders for love. It so moves Jaggi that, three years later, he’s on his own, footing it across Europe with other immigrants to reach London. Gautam (Mohit Raina), an Indian diplomat in Paris, and the same groom in the aforementioned scene, looks aghast when he finds Jaggi in a holding cell. Should have held that whiskey…

Jaggi tells his story, which begins with him meeting Kartika at a sports meet three months ago. Their very first scene spells trouble: catching her by the pool (she’s a swimmer, he plays hockey), Jaggi clicks a picture of her without permission and uploads it online. That should be enough, in 2021, to have him expunged and facing legal charges.

But Kartika isn’t offended so much as positively provoked, raiding his locker room and filming Jaggi in the shower. A little later, she pushes him into the pool and revives him with CPR. Director Kunal Deshmukh probably thinks he’s flipping the script on old Bollywood: boy chases girl, harasses her, she softly relents. Yet the opposite doesn’t quite work for Shiddat, with both Jaggi and Kartika coming across as a bit cracked and difficult to trust.

The film returns to the present day, breaks for coffee, and is off again. The secondary love story — that of Gautam and his activist wife Ira (Diana Penty) — is straightforward, reminiscent, what with all the Shah Rukh Khan references, of the crumbling marriage in Chalte Chalte (2003). Like that film, the conflict here is career, an outspoken Ira telling her servile, diplomatic husband that she married him and not ‘the Government of India’.

Shiddat, admittedly, is not a film about the refugee crisis. The world of camps, checkpoints and detention centres is only a backdrop for Jaggi’s grand odyssey. Stranded in Calais — a port city in France — he resolves to swim the English Channel to Dover (near London). The idea is so ridiculous that Gautam initially entertains it, then regrets when Jaggi makes eyes at a swim store. Mohit is frequently entertaining in these parts, his hard-hat manner comically playing off Sunny’s trainwreck-y spunk.

At 140 minutes, Shiddat stretches time, logic and audience goodwill. The ending feels purposeful — except I doubt what that purpose is, given the muddle of emotions this film leaves you with. Its innate silliness — Jaggi, jumping off a roof, lands in a pile of cushions — overrides any real comment about romantic hedonism or its fallout. It’s all crazy, stupid, and laughably short on love.

Denial of responsibility! TechiLive.in is an automatic aggregator around the global media. All the content are available free on Internet. We have just arranged it in one platform for educational purpose only. In each content, the hyperlink to the primary source is specified. All trademarks belong to their rightful owners, all materials to their authors. If you are the owner of the content and do not want us to publish your materials on our website, please contact us by email – [email protected]. The content will be deleted within 24 hours.
entertainment newsEntertainment updatelabourslostLovesnews updatereviewShiddat
Share

Effect of Virtual Reality on Motor Control of Young Children