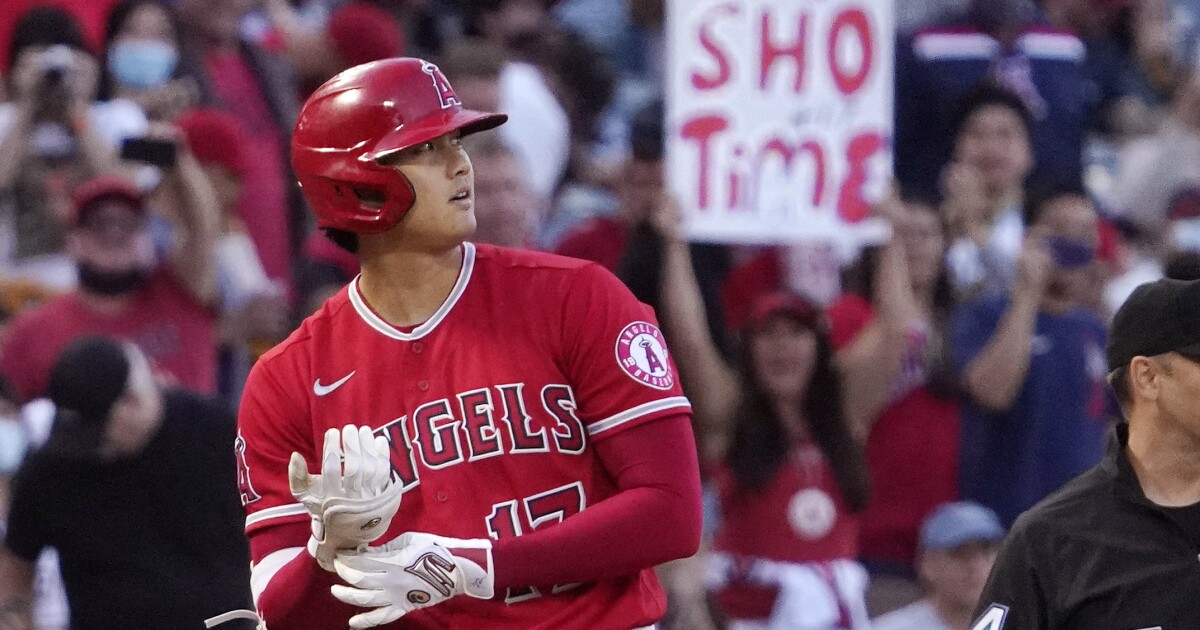 Shohei Ohtani hasn’t reflected much on his historic season.

Between his 23 pitching starts, his near-everyday role as the Angels designated hitter, and the meticulous between-games routine that has allowed him to handle both over the course of a full MLB season, he hasn’t had the time.

But, on the eve of the offseason, the two-way star had already begun to make plans for the winter.

He’ll spend a couple weeks in Anaheim, then return to his home in Japan. He wants to increase his offseason training workload, hoping to get even stronger going into next season.

And, if the Angels approach him about negotiating a potential contract extension, Ohtani said he would be open to that too.

“They’re, of course, the organization that’s supported me the most over the last four years,” Ohtani said in Japanese before the Angels’ season-finale Sunday against the Seattle Mariners.

“I think I would, of course, talk to them with feelings of openness. Regardless of whether that leads to anything, I individually want to have a solid offseason to make sure we can win next year.”

Ohtani’s future with the Angels has become one of the bigger storylines over the team’s finish to the regular season, following comments he made last week that seemed to potentially call into question whether he would want to stay with the club long-term — especially if they fail to become postseason contenders before he’s scheduled to reach free agency following the 2023 campaign.

Manager Joe Maddon and general manager Perry Minasian both downplayed the situation, insisting Ohtani was simply echoing frustrations shared throughout the clubhouse in the midst of the Angels’ sixth straight losing season and seventh in a row missing the playoffs.

The likelihood of Ohtani, 27, and the team agreeing to a long-term extension this winter remains unclear.

The unprecedented nature of Ohtani’s season — in which he’s collected 45 home runs and 99 RBIs in addition to posting a 3.18 ERA and 156 strikeout, making him the heavy favorite to win the American League MVP award — would make any negotiation complicated, with no true precedent to follow regarding the value of his two-way skill set.

Another unknown: How much Ohtani will be able to replicate his 2021 production, in which he avoided any stints on the injured list and appeared in 158 of the team’s 162 games.

During his final regular-season video conference with reporters Sunday, Ohtani instead focused most of his answers on his personal goals for the offseason.

He thinks he still has room to improve for next season, especially on the mound — where he threw more than 130 innings this season after making only two starts in the two injury-plagued years prior.

While he said he didn’t struggle with fatigue this year, he added he wants to increase his weight-lifting routine to continue adding strength this offseason as well. It will be the second winter in a row he won’t be limited by any lingering injuries or rehabilitation from surgery.

And he reiterated that, regardless of what his long-term future might hold, he’s hopeful that he can help the Angels return to relevance as soon as next season.

Denial of responsibility! TechiLive.in is an automatic aggregator around the global media. All the content are available free on Internet. We have just arranged it in one platform for educational purpose only. In each content, the hyperlink to the primary source is specified. All trademarks belong to their rightful owners, all materials to their authors. If you are the owner of the content and do not want us to publish your materials on our website, please contact us by email – [email protected]. The content will be deleted within 24 hours.
Angelscontractextensionfocusednegotiatenews updateoffseasonOhtani
Share

How to Increase Your Visibility Online and Attract More Clients