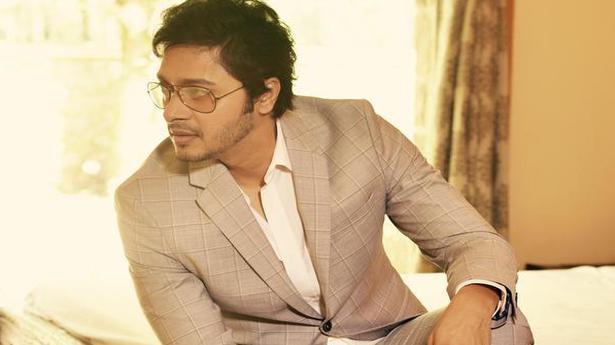 Shreyas Talpade: ‘I felt when everything is going online, why not theatre’

“And then I found theatre,” says actor Shreyas Talpade, getting nostalgic as he talks about his first love. Growing up in Mumbai, Shreyas remembers being an average student, who was not good in sports and was low on confidence. “I owe everything to the theatre. Once you get involved in theatre, it boosts your confidence, shapes your personality. I began to feel that I could do something.”

He remembers watching practice sessions of Shafi Inamdar directing Gujarati plays and acting in iconic Marathi plays like Vasant Kanetkar’s Ashroonchi Zhali Phule. “The play inspired many films, including the Dilip Kumar-Anil Kapoor starrer Mashaal. I used to play Anil sir’s part. Given a chance, I would like to do it again, as the play remains meaningful,” he says.

Now, it is payback time and Shreyas has launched Nine Rasa, an OTT platform dedicated to theatre. Already live, it has more than 100 hours of content in Hindi, Marathi, Gujarati and English. More importantly, it has provided opportunities to around 1,500 actors and technicians during the pandemic.

“The idea came into being after phone calls were exchanged as to what could be done for the theatre community. I felt when everything is going online, why not theatre. After all, it is one of the oldest art forms. When people are missing theatre, why should it remain limited to auditoriums,” asks Shreyas.

“When I used to do theatre, we had shows on weekdays as well, but gradually theatre was reduced to a weekend activity. Online shows will not have such limitations.”

But isn’t theatre all about live response, no retakes, and cuts? “No two ways about it. The magic of a live performance cannot be replicated in any other medium,” admits Shreyas. “But it is a great opportunity to document theatre and reach homes. Given a chance, I would have continued in theatre. Because of the limited returns, one must explore multiple options to keep home fires burning.”

Talking about Nine Rasa, Shreyas underlines the efforts that have been made to see that the sanctity of the medium is retained. “We ensure that there are minimum cuts and no gimmickry. Shooting a play allows you to improve upon the visual and sound quality.”

“First,” he says, “we expect the cast to perform the play as they do on stage. Maza aa raha hai toh barkarar rakhen (if they are having fun, we expect them to continue).” Afterwards, if required, some close-ups or a few camera shots are recorded. Lapel mics are now common on stage and performances are less ‘loud’ than what they used to be when the voice needed to reach the last row.

Sometimes, he says, it depends on the instinct of the director and the quality of the audience as well. “When Utpal Dutt was once asked why his plays are loud, he said it was because he wanted to be heard. His plays made socio-political statements. Sometimes a dash of slapstick has to be added to help the audience understand the essence of the play and the message it wants to convey.”

Audience reaction is crucial to theatre. “We did want to bring the audience inside during the shoot but the restrictions during the pandemic don’t allow it,” he adds.

On the quality and variety of content, Shreyas says that an attempt has been made to include various shades of theatre on the platform. “It is not just about Hindi and Marathi commercial theatre. We have plays in different languages and genres. There are full-length plays, one-act plays, comedies, dramas, thrillers, experimental theatre, etc. Ekanki or one-act plays are like 20-20 cricket matches and should appeal to the millennials.”

A bit of everything

In future, he says, they would like to stream musicals like Mughal-e- Azam and also international productions. “Whatever is possible on stage, will be available on the platform, including skits and stand-up comedy. The good thing about today’s generation is that it likes to try everything.”

Shreyas is in touch with stalwarts such as Naseeruddin Shah and Nadira Babbar and is hoping they will bring their productions to the platform. Classic plays of Dinesh Thakur’s Ank Theatre Group such as Bibiyon Ka Madarsa and Hai Mera Dil are already being staged. “Some of them have reservations about the online format and want to wait a while before coming on board,” says Shreyas.

Interesting plays such as Pashmina and Pause are already online and he is looking forward to Ae Ladki, an adaptation of Krishna Sobti’s story. “We only buy the rights of the recorded productions. The producers are free to stage their plays on ground when the condition improves and we don’t expect any share in revenue unless we are co-producing the play,” says Shreyas, who is working out a model where all the stakeholders can have a steady revenue stream.

How does his platform compare with a channel like Zee Theatre? Shreyas says those channels also have theatre, but “we only have theatre.”

Theatre reflects the reality of everyday life but Shreyas is staying clear of controversial productions. “Our mantra is to engage, entertain and enrich,” he says.

Loading...
Denial of responsibility! TechiLive.in is an automatic aggregator around the global media. All the content are available free on Internet. We have just arranged it in one platform for educational purpose only. In each content, the hyperlink to the primary source is specified. All trademarks belong to their rightful owners, all materials to their authors. If you are the owner of the content and do not want us to publish your materials on our website, please contact us by email – [email protected]. The content will be deleted within 24 hours.
entertainment newsEntertainment updatefeltnews updateonlineShreyasShreyas Talpade; Marathi plays; Hai Mere Dil; Sahebji Darling; Biwiyon Ka Madarsaa; Pashmina; Naseerudin Shah;Talpade
0
Share