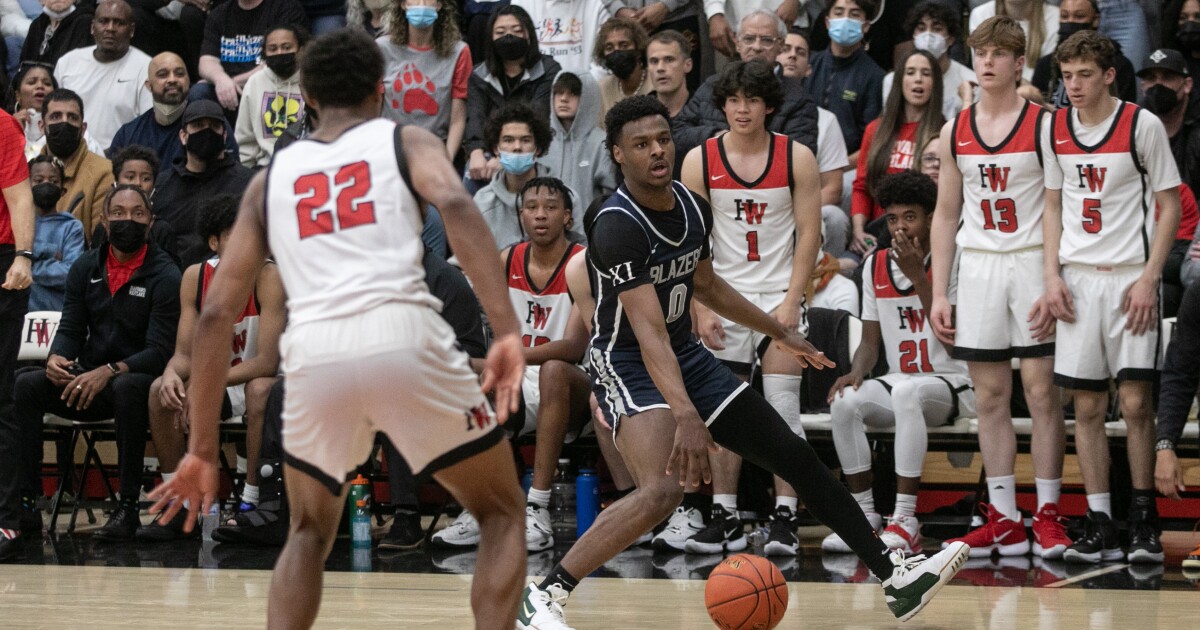 In a season that has been more about hype than performance and more about potential than results, the all-star team that landed at Chatsworth Sierra Canyon finally provided its coach, Andre Chevalier, with something to shout about.

During their Southern California Open Division semifinal regional playoff game against Studio City Harvard-Westlake on Saturday night, the Trailblazers’ man-to-man defense was so tenacious that three times the officials called five-second violations against Wolverines guards. That’s the kind of play Chevalier has sought to unleash for weeks with a team that goes 10 deep but hasn’t exactly responded in big games.

“This year has been long and tough,” Chevalier said. “Sometimes you need that adversity to get to a place you can buy in and play for each other.”

After losing by three to Harvard-Westlake on Feb. 18, the Trailblazers rebounded with a 72-55 victory over the Wolverines to advance to the Open Division regional final Tuesday night against Corona Centennial. The winner advances to the March 12 state championship at Golden 1 Center in Sacramento.

“Because we lost, they finally locked in playing hard and playing for each other,” Chevalier said. “That what we always wanted. They did that tonight. I’m very proud.”

After holding a one-point halftime lead, the Trailblazers put together a 13-2 spurt in the third quarter to break the Wolverines’ spirit.

Amari Bailey, who wasn’t in the starting lineup and looked surprisingly out of sync in the first half, scored seven consecutive points during the streak for a 46-33 lead. Mike Price kept driving and drawing fouls. Dylan Metoyer made a three. Shy Odom contributed two baskets.

Happy days were suddenly here again for a Sierra Canyon (26-4) team that won state titles in 2018 and 2019 and a regional title in 2020 but hasn’t reached that level since.

“The loss got to us,” Metoyer said. “We came back hard and wanted it more than them.”

Sierra Canyon will be a heavy underdog against a Centennial team that is 31-1 and won its semifinal over Torrance Bishop Montgomery 76-55. Jared McCain made seven three-pointers and had 30 points. Donovan Dent added 28 points.

In Open Division girls, Juju Watkins scored 23 points to help Chatsworth Sierra Canyon go on the road to defeat La Jolla Country Day 63-62. Sierra Canyon will get a rematch in the championship game against unbeaten Etiwanda, which defeated Corona Centennial 69-51.

In Division I girls, Windward rallied from an eight-point deficit at the end of regulation to defeat Fullerton Rosary in overtime 80-72. Skye Belker scored 26 points. Windward will play Orangewood Academy.

Denial of responsibility! TechiLive.in is an automatic aggregator around the global media. All the content are available free on Internet. We have just arranged it in one platform for educational purpose only. In each content, the hyperlink to the primary source is specified. All trademarks belong to their rightful owners, all materials to their authors. If you are the owner of the content and do not want us to publish your materials on our website, please contact us by email – [email protected]. The content will be deleted within 24 hours.
CanyondefeatgameHarvardWestlakenews updateplayoffreboundsregional
Share

Prateik Babbar: The OTT world has revived me in many ways

What It Takes to Buy Your First Home Now